Despite Homer Bailey following up his No-Hitter with a No-Hit-Bid, the Reds' bats went silent in the potential clinch game...and their gloves failed them late.

Homer Bailey took a no-hitter into the 6th, continuing the dominance he displayed in his no-hitter in his last outing vs. the Pirates in the Regular Season. Bailey finished with a 1 hitter in his 7 IP, the second consecutive Reds starter to toss 7 innings of 1 hit baseball this postseason. Considering Cueto's unfortunate mystery oblique/back issue, it's rather awesome to see Arroyo recapture his past stuff, Bailey reach the lofty potential he always had, and Latos show that he's capable of surprise spontaneous spot-starts. Though the rotation, the most consistent and accountable part of the Reds season, has been thrust into a bit of flux, it's nice to know that there are some gamers capable of elevating their performance. I expect to see Mat Latos called upon to do just that in Game 4. 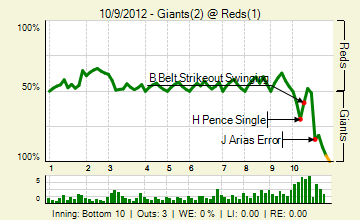