There's bound to be a way to describe the disappointment of this season.

Share All sharing options for: Closing the book on 2014

On three separate occasions I've plowed some 300 words into vague rambling about the 2014 Cincinnati Reds, thrice attempting to craft metaphors and parables that could accurately describe a season that had about as much pizzazz as tube socks.

I've tried and tried to come up with something succinct, something both concise and encapsulating that can spell out the awful, the mundane, and the nostalgic portions of the last half-dozen months.

Something like this picture would be nearly perfect, if only it were wordier with punctuation. 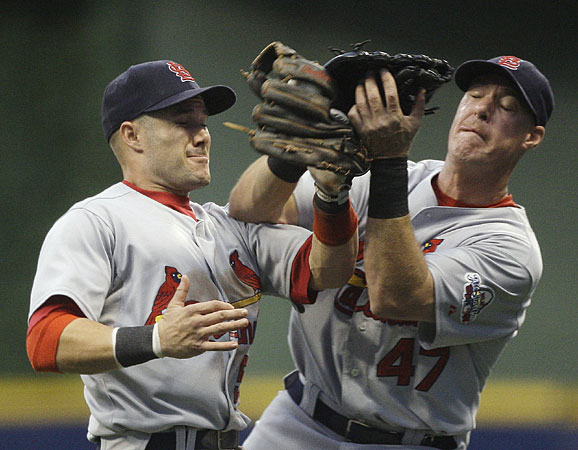 A simple combination of nouns and verbs that could sum up Billy Hamilton's rookie year, from Adam Wainwright's curveball through Jay Bruce thinking that short pop-out wasn't deep enough all the way to the dismal September that lost him the ROY race.

A dozen or so words that could build out a visualization of the pain in Joey Votto's face when he'd swing and end up standing on just one leg.  Maybe even a dozen or so more telling the people who think he hasn't really been hurt what they can grab and where they can stick it.

A non-dangling participle that mentions how you said "oh, no" to yourself each time Jay Bruce started a long, drawn out swing on a breaking ball destined to end low and away.  A sidenote speaking of how you wanted to hug him every time he smashed a liner into the heart of a shift.

A quip detailing how many times you thought about checking where the offense ranked in various statistics before mercifully deciding your sanity was worth more.

A wisecrack about Homer Bailey's new 9 figure contract that ends with reticence about how he'll now have a scar on his right forearm to match the arrow tattoo on his left.

A gibe about how a 3rd place team lost a player valuable enough to warrant a $130 million contract and the most expensive piece signed before the team played again was Skip Schumaker.

There's a single defining moment somewhere out there in the baseball universe that fits what the Reds just slogged through so snugly it shows off their moobs.  Phrasing so eloquent that it can relay the lost season from Mat Latos as well as the breakout burst from Devin Mesoraco.  A Cy Schourek level way with words that could put into context that the best OPS by a qualified Red in 2014 (Todd Frazier's .795) would have been tied for the 91st best mark in the 2006 season, and whether or not that should change how you view Johnny Cueto's brilliant campaign.

Perhaps more importantly, something that waxes poetically about this season being the first of my adult life where my favorite team's window could be seen sliding shut.

Buried in the disappointment of 2011 was the optimism that 2014 should be a glory year, a season with peak production from Jay Bruce and the pitching staff and, if we were lucky, another dominant season from Red-for-life Joey Votto.  There's not a similar hope for 2017 buried in the ashes of 2014, though, at least not one that's able to be projected with any certainty.  I think that's the hardest part about the way this season dissolved, really, since we can't look ahead three years and see the same young core maturing, the payroll increasing another 50%, and a group of homegrown players emerging as a team to be frightened of.

There are reasons to be optimistic that the future can still be bright for the Reds, but the only way to that end is with still undefined means, and that differs wildly from the most recent times this franchise has been in the doldrums.  There are answers to the questions that must be asked by the front office this time around, but they've been on buses in the Southern League and in the visitors dugouts in Louisville and Dayton, and all the bummer that was 2014 did was move us all one step closer to having to face that.

Someday, some Irish bar somewhere will have a well crafted mirror hanging on their wall with some semblance of the 2014 Reds etched on it beside a description of Murphy's Law.  What could have gone wrong in 2014 went wrong for the Reds, and the margin for error was simply too large for the roster to recover.  If anything, we can hope that this season was the one where the bad luck oozed out from every possible corner so that there's none left for the future.

2014, man.  The year when Bronson Arroyo got injured pitching for Tony La Russa.