Slinging statistics side-armed to strike you out.

The 2014 Cincinnati Reds have been as offensively inept as at any point in recent memory, at times being so bad that it's hard to even look at them.

No, seriously.  Being that bad means they don't even fit on the same page as the headers in most cases. 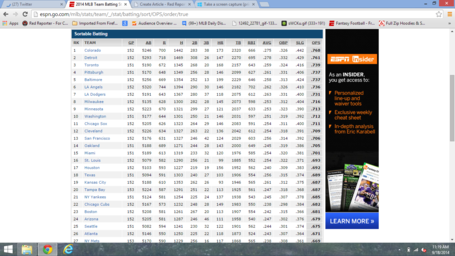 On the season, the Reds rank 29th out of the 30 MLB teams in OPS at .662, bested only by the lowly San Diego Padres and their rather impressive .631 mark (and remember, if you will, that a good portion of the Padres' offense is championed by former Reds farmhands that would otherwise be plying their trade under the lights at GABP 81 times a season).  The Reds have hit a collective .238 (tied with the New York Mets for second worst in baseball), have a mutual .298 OBP (which ties them with the Chicago Cubs for second worst in baseball), and have a .364 slugging percentage as a team despite playing in a home stadium that ranks as the third most dinger friendly of the 30 on the continent (which is good for just third worst in baseball ahead of both the Mets and Padres).

Of course, the Reds have spent all of the last two months without their usual offensive battleship in the lineup and much of it without one of their usual key cogs.  Joey Votto has been sidelined with a thigh injury since July 5th, and Brandon Phillips shredded his thumb just four days later to rob the team of two perennial All-Stars just one week before the actual All-Star break.

The slide since the Reds sat 51-44 at the break has been tremendous.

That's left the Reds at just 20-38 since the break and dropped them nearly to the bottom of the NL Central standings despite often being backed by otherworldly starting pitching.

As for some of the individuals that have taken the batter's box this year, well, let's look at some of statistical oddities of the two everyday regulars who have managed to stay on the field and healthy for most of the season.

The speedy Reds leadoff hitter was in large part the reason for writing this whole shebang in the first place, as he's managed to carve out several distinct hitting patterns, the worst of which have torpedoed his overall season numbers.  Through 592 PA in 2014 so far, Hamilton has hit .256/.298/.364 (.662) with 6 dingers and a .311 BABIP, sturdy yet not spectacular numbers for the young man's first full season in the big leagues.

How those numbers add up is the funny part, however.

He's been a damn fine pinch-hitter, though, having gone 4 for 7 with a double.  So there's that.

Frazier has anchored the Reds offense through their successes and struggles in 2014 and has put together the kind of season that will go a long way towards making him a ton of money in the near future.  The primary 3B and sometimes 1B has hit .277/.337/.454 (.791) with 26 dingers this season, and with Devin Mesoraco's two DL stints and routine days off factored in, Frazier has been the one real threat in the Reds lineup on a day-in, day-out basis.

He, too, has some freaky deaky splits, though.

As former fearless leader Slyde once never said (but probably thought at least once), "numbers never lie, unless you want them to."

There are numerous ways in which the 2014's offensive offense scuttled what could have been historic seasons from Johnny Cueto, Mike Leake, Aroldis Chapman, and poor, poor Trevor Bell, but they've been bad to the point where there's really no way to spin them positively.  In reality, it's best we flush these from our memory and hope that the collective 2014 was the bad split next to a 2015 that will balance it all out, and hope that Joey Votto returns to striking fear into opposing hurlers.

I didn't mention Jay Bruce in any of this on purpose because, oh man, poor Jay Bruce.