Red Reposter: Is there anything left to care?

Putting the "Loss" in "Losantians"

Share All sharing options for: Red Reposter: Is there anything left to care?

I'm currently reading Karl Jacoby's Shadows at Dawn about a massacre of Apaches in the late 1800s Arizona, because yes I would rather read about actual genocide than care about the Reds at this point. I am also trying to boost our traffic numbers because hey, if it bleeds it leads, right?

Anyways, it's pretty incredible to me that no matter how dark and gruesome and awful those scenes in Cormac McCarthy books are, what actually happened is so much worse. There's literally a lack of language to describe the violence of the American West.

Which is to analogize, I don't know how to describe a Reds team that's been shut out by the Cubs two days straight.

In Reds news, Skip Schumaker is the Reds' nominee for the Roberto Clemente Award, which apparently the Reds' brass thought is given to the person who needs to fly more often, not the best humanitarian on the team. Sighhhh.

In better (?) news, Joey Votto took batting practice. With 10 game left in the season I really fail to see the point, but hey, I'm not a doctor. Also, the new MLB.com layout doesn't work for me. Does it work for any of y'all?

Our dear friend C Trent and, I'm guessing, C Trent's brother are on the cover of City Beat to talk about the coolest parts of Cincinnati. 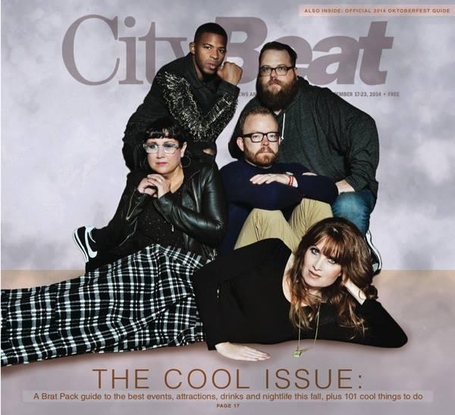 I'm a huge fan of his work, but I'd think he'd also see the humor in a sportswriter being on the cover of a "Cool Cincinnati" story. He is, definitely, very cool, though. So congrats.

In non-Reds news, there's a great Vice Sports article on gambling in English soccer. We had this conversation on here, so here's a nice little bit of context on the weirdness of it.

Fun Reddit thread on "Where are the 'Area 51's in other countries?"

To get back to our lede, I'm looking at suggestions for Winter Book Club titles. I know we've talked about Devil's Snake Curve here a bit, and I already am scheduled to do an interview with the editor of the Cincinnati Anthology. Any other suggestions?