Red Reposter: Moustaches, all the way down

The Reds have an all-star game logo and haven't lost either of their last two series. Things are looking up.

Share All sharing options for: Red Reposter: Moustaches, all the way down

The Great Mayor John Cranley Mark "Wild Pitch"  Mallory held a presser to talk about the game and the logo and I guess some other stuff. Anyways, courtesy of the Enquirer, here it is: 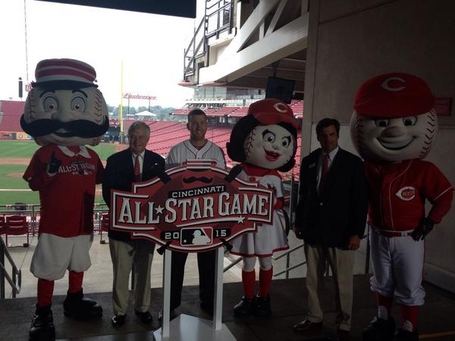 The new logo, be-mustachioed as it is, has set the sports internet a-flutter. Todd Radom notes that the logo was used on the 1953 All-Star Game in Crosley field, and Grant Brisbee reminds us that he is terrified of Mr. Redlegs.

Most interesting to me, though is how Todd Frazier is used to promote the event. I'm surprised Joey Votto wasn't around to do it. I guess he's not in the lineup and not in fans minds, but the situation seems a bit weird. When Trent was on the radio to give an injury report, him and Marty were joking around about how the only news about Joey Votto was that he's still alive. Even Brandon Phillips, who has frozen out the Cincinnati Media, is more accessible than Votto. Not sure what's going on there.

Also big news was the weird double-ball trick that the Reds accidentally pulled last night. C. Trent Rosecrans' "Oral History" of the sequence of events was wonderfully written; dude is quickly becoming my (and many more important peoples') favorite journalist from a technical standpoint. He gets good quotes and puts them together wonderfully.

Basically, Jumbo Diaz was warming up, and the bullpens at Progressive Field have the pitcher face the field. A warmup toss was uncorked way wild just when a line drive went to right field, and though Jay Bruce picked up the correct ball, David Murphy on third base saw a ball on the ground and went home, allowing himself to be picked off easily.

Tito Francona sounded more bemused than upset, and everyone stuck up for Murphy rather than try and call out the Reds or the Indians. Just weird stuff all around. Be sure to check out that video of Bruce in the above clip, he has great facial expressions. Nice forelock, too.

Lutz, recently moustache-less, is feeling good about his pinch-hitting role. I'm still surprised he didn't DH either of the past couple games, but hey.

The Royals flew a Royals fan out from South Korea to spend a weekend in KC. It's kind of a dumb story -- as my Royals fan friend says, "basically, this dude's claim to fame is being a non-White Royals fan" -- but it's a nice little move by the Royals organization and can only help a team like them make inroads into the Korean market. The most important question was left unanswered, though: What does a Korean guy think of KC BBQ?

I saw this shirt yesterday, and I find it pretty hilarious. It reminds me of the "Pronk" nickname. 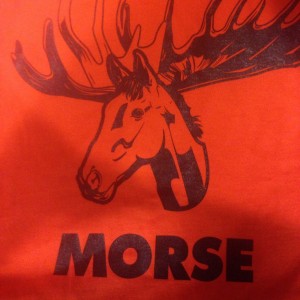 Ever wonder why grocery rotisserie chicken is so cheap?

My new favorite restaurant review ever, of a "Appalachian" joint in "Brooklyn."

Five Prose Poems for Civilization, by Kanishk Tharoor. I am so so so excited for the upcoming Civilization: in Space.