This week has been a riotous cacophony of blunders for the good ol' boys in red. Like some serious end-of-empire, Dien Bien Phu, Franco-is-still-dead, shit. There's really not much more to type in that regard. Hopefully Cueto can at least get a win like he's done his past five starts and in seven of his past eight.

It's also Kalvoski Daniels' 51st birthday, so the day can at least be brightened with: 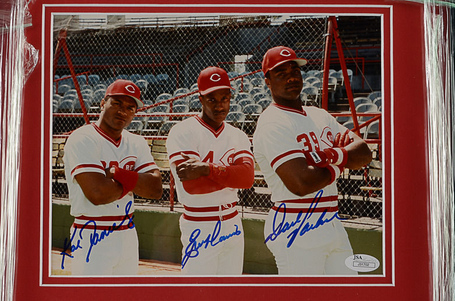 Aroldis Chapman did the ice bucket challange thingy and put it on Instagram. So did Johnny Cueto. Anyone still think Cueto is fat? And also, unsurprisingly, it was Brayan Pena with the ice buckets. Cueto's no-sell of the ice is probably the only Reds-related thing that has made me smile recently.

In case you wanted a reminder that you were an immature dumbass when you were in high school, Robert Klemko has a fantastic story from the Ferguson, MO McCluer High football team. Klemko interviews a bunch of 17-year-olds who are just wildly more mature and well-spoken then I am at a decade older than them, and it's a fascinating look at teenage life in a city where teenage life is not valuable.

I often rag on football, but at least in Klemko's story football isn't as much a way out as it is a way to provide order and reason in a situation where there really otherwise isn't. It's a great read. So, you know, read it.

And in the rest of Vice (who I don't really like, but they recently hired two of my personal faves in Rios and Charles Davis), Ban Golf.

BELT's Rust Belt Film Festival is a reminder that movies were actually set in the midwest in the 1980s. And that Tom Cruise played a character named Stefan Djordjevic, which seems weird now. Relatedly, I wrote something for BELT about the fences of St. Louis, arguing that Busch III should have black iron fences in its outfield since it has them all around the rest of the city. Among other stuff.

You may or may not be the sort of person who wants to read like 6,000 words about falconry in the Black Sea. But I really, really, hope you are because it's really awesome. Basically, hawks are like flying cats and these dudes capture them, carry them around even to bars and stuff, and then use them to hunt. It's an awesome article written by a friend of mine. If you have time to read it, please do.

It's better than the Reds.