On the future of Walt Jocketty as Reds GM

As the under .500 Reds limp towards the end of the 2014 season, their GM will be wrapping up the final year of his current contract.

Share All sharing options for: On the future of Walt Jocketty as Reds GM

Baseball and old-timey adages have happily held loving hands like beer and pizza since life was lived in black and white and horn sections dominated every song of the day.  They paraded around American society when Cincinnati had streetcars, they took over television when Cincinnati didn't have streetcars, and they'll still be popping up on mobile devices and smart-watches when your kids' kids ride streetcars through Cincinnati again in the future.

They come in all shapes and sizes, too, from each corner of society, and they've been ingrained in our brains since we were old enough to experience the game of baseball for the first time.

They come in practical form from legends of the sport:

Baseball is the only field of endeavor where a man can succeed three times out of ten and be considered a good performer. - Ted Williams

Even movie stars have piped in with opinions that have been seared into our baseball memories:

A hot dog at the ballgame beats roast beef at the Ritz. - Humphrey Bogart

There's the nostalgic and prophetic:

People ask me what I do in winter when there's no baseball.  I'll tell you what I do.  I stare out the window and wait for Derek Jeter to go out and be better than me.  - Rogers Hornsby

When they start the game they don't yell, "Work ball."  They say, "Play ball." - Willie Stargell

And, of course, the funnier:

The Cubs. - The Aristocrats

There's one particular adage that has been pitched as the prevailing strategy in all sports for years upon years, however, and it's one that both the game of baseball and the Cincinnati Reds are very familiar with, too:

Patience is a virtue in many things, but it's not one often found in the rough and tumble, hyperlucrative world of major American sports.  On a list of the ten most important things on the plate of a team's front office, "Winning" occupies spots one through nine, with number ten being "Have a ton of future winning ready to immediately follow current winning."  It is not a realm rife with long tenures, nor is it one that features a plethora of second chances.

If you get lucky enough to get an opportunity to pull the strings in the exclusive world of Major League Baseball, you generally get one window at a good run at things, and if there's not a banner flying at the end of it, the plug gets pulled.

Walt Jocketty is now 121 games into his 7th season as the General Manager of the Reds - his second such lengthy and successful stint as a GM in the big leagues - and he's in the last year of the 3 year contract extension he signed in September of 2011.  Only his former boss and mentor, Sandy Alderson of the New York Mets, can claim to have more years on his ledger than Jocketty and fellow 63 year old Jack Zduriencik of the Seattle Mariners.  Last night's loss dropped the Reds back under .500 at 60-61, and since the Reds appear to be drifting farther away from a playoff berth with every page torn off your Far Side calendar, many people have turned their focus towards the offseason, the winter, and the dawn of a hopefully healthier 2015 version of the Cincinnati Reds.

Which direction the next few months take begins with whether Jocketty will be around and in charge, though, and that's the single most defining decision for the path of the franchise's future. 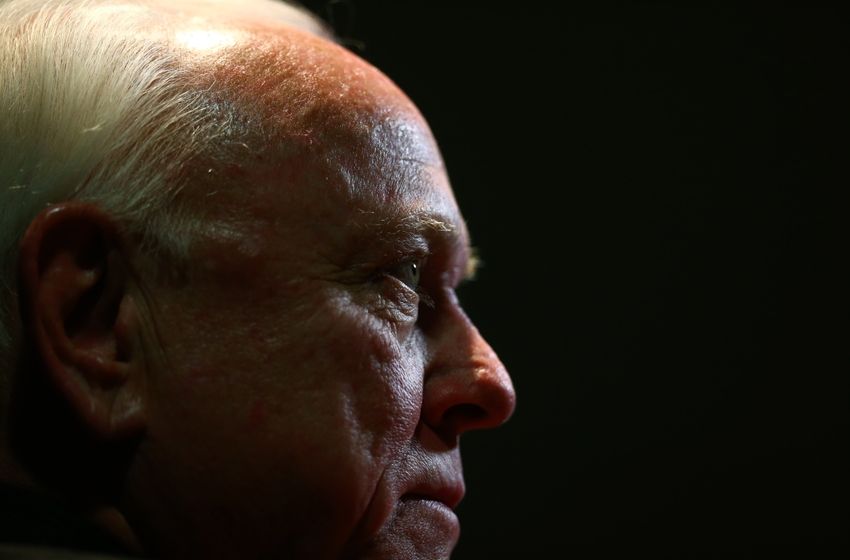 Seven years is a long time to have any executive around, and that's given us a lot of insight into how the front office in Cincinnati works.  We know that the ownership group headed by Bob Castellini has known and worked with Jocketty dating back to his successful stint as the GM of the St. Louis Cardinals, and that there's not just a great level of affinity there, there's also a great deal of mutual respect between the two.  We know that Walt has built a World Series winner before, and that he's been captaining the ship for the best run of consistent success the Reds have seen in some 35 years.  We know that Bob hand picked Walt, that Walt hand picked his staff (which features several former big league GMs), and that both hand picked Bryan Price to lead the team on the field.  We know that the Reds have won a pair of division titles and have made some form of the postseason in three of the last four years, and we know that the players projected to be in the dugout are the best, most talented collection the franchise has had in a long, long time.  Heck, we know that most of them were drafted and developed by the franchise itself.

There's also the fact that enough was wrong with the team following the stumble down the 2013 stretch that Dusty Baker was fired as manager along with much of the existing in-dugout staff and coaches.  There are the poor early returns on the massive extensions doled out to Joey Votto, Brandon Phillips, Sean Marshall, Jonathan Broxton, and - to some extent - Homer Bailey.  There's the wealth of young talent burgeoning breathing down the Reds' neck from Chicago, Pittsburgh, and St. Louis that can't be matched by the Cincinnati farm system.

There's writing on the wall as clear as day that says that 2015 is very well the last year the band is all together, and it's that bit that puts Jocketty's lame-duck status the most in the spotlight.

He's operated in the last year of a contract before and similarly played it out in the midst of a disappointing, losing season.  He didn't re-up for his most recent contract until September 23, 2011, at which point the Reds were 5 games under .500 and 16 games out of 1st in the NL Central, far removed from the glory of their first division title in a decade and a half the year before.  He then proceeded to trade the farm for Mat Latos and sign both Votto and Phillips for a collective 16 years and $297.5 million, cementing the fact that the roster he'd created would be around for a window the length of his contract and more.

And that's where the pending decision about the future GM of the organization comes into play.  The lack of moves since the winter prior to the 2013 season has shown that the current iteration of the Reds just hasn't quite been able to get over the hump and into postseason success territory and that there are likely a few rather serious moves that must be made for that to happen.  Coinciding with that is the myriad of players scheduled to be free agents following the 2015 season and the contract and/or trade negotiations whose direction will dictate the path of the franchise far beyond just the next season of play.

There's no way to duck that the GM in charge of the 2014-2015 winter and the moves they make will have a defining impact on the roster as far down the road as 2018, 2019, and 2020.  Whether Johnny Cueto and Mat Latos are traded for an army of AA ballers or both inked for 9 figure contracts, the next Reds era will have etchings from the GM in charge of this upcoming offseason, and that future must be weighed by Castellini and his partners at the top over the next two months.

Ultimately, the fumbling of the 2014 season can be chalked up largely to a cantankerous quad muscle, a winter and spring filled with freak meniscus tears and facial fracture horrors, and the inability of the singular position player acquisition since spring of 2013 to be able to replace them all.  Like it, or not, that all falls on Walt's hands to some degree, but those aren't the kind of fallacies that should define whether he is leading the team beyond September of this year.

I think it's undeniably clear that the importance of the upcoming winter was on his mind, and that was probably the prudent decision for his future with the franchise.  Whomever is hired to be the GM of the Cincinnati Reds after the 2014 season wraps won't be getting hired for what's happened over the last 7 seasons, anyway; rather, they'll be getting hired to preside over the offseason that will shape the next decade of Reds baseball.  That Walt didn't leverage more of that future for a fix of the 2014 season lends credence to that, too, and it makes me believe that he'll be re-signed in another five or so weeks to move the franchise through the huge contract and personnel decisions looming in the next calendar year.

Either way, we'll find out in a month whether Walt was protecting the future for his use, or for his successor's.  There's only the next decade riding on it.