One Quick Reposter Before we Co(lorado)

Share All sharing options for: One Quick Reposter Before we Co(lorado)

Brandon Phillips will be on a rehab assignment with the Louisville Bats over the weekend. He's no doubt excited about the chance to get into the Cardinals series in St. Louis starting on Monday, but we'll see how his AAA rehab assignment goes. I'm kinda fascinated to hear what it'll be like to be with Brandon in a minor-league locker room (Lunchables for everybody!) but it is absolutely good news to have him back and to solve some lineup construction issues going forward.

Along the lines of insane police activity, some random gambler made up some silly story about Jeff Locke throwing games and then ended up with his whole family pulled over by a police caravan and told himself that he'll never see his family again. It's an absolutely insane and very well-written story about how viciously baseball polices its sanctity, even though, as my Royals fan friend put it "worst-case scenario the Pirates lost 3 games they shouldn't have and the whole damned armed forces came in to swoop in on a guy."

Speaking of the Royals, Rany Jazayerli wrote in the New York Times about the Korean Royals fan. The Director's Cut version is on his blog. Billy Butler took Sung Woo out to Zarda BBQ for lunch, and while we haven't heard yet what a Korean thinks of KC BBQ, it's pretty clear that Billy Butler is the least-athletic-looking non-pitcher in the MLB, right?

Devin Mesoraco is murdering baseballs, sending threatening images of dead baseballs to their families, and is then killing their little baseball families. The United Nations of Baseballs is calling on civilized countries of the world to do something, but Baseball Russia is exercising veto power. Anyways, the Golem is having a heck of a season, and Jeff Sullivan is on it.

The Blue Jays will host the Reds for two spring training games at l'Stade Olimpique in Montreal. This is generally very exciting, awesome, news because we'll get two sort-of big-time games when we're most starved for baseball in 2015 Spring Training. Anyone think they'll be able to make it up there?

In more-bummery Cincinnati news, a family was purportedly racially profiled at GABP. They moved up a few rows at the end of a game and were the only group asked for their tickets. People are awful, even in heaven.

Scott Parker at A's Nation (with the huge help of Wendy Thurm of Fangraphs) talks about how blackout regulations may be falling down. That'd be neat.

GABP is an awesome thing has done as much for the Banks as could be done with the big freeway cutting through it. Atlanta? Well, not so much 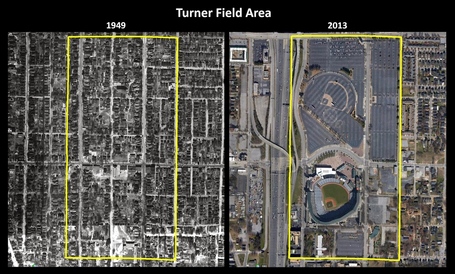