Someone had a really bad idea to fix the Reds, and it wasn't me this time.

Share All sharing options for: Red Reposter: Change We Can't Really Believe In

Me and bbjones caught the Bakersfield Blaze-San Jose Giants game last night. We had incredible weather, mediocre pitching, and $8.50 Lagunitas, and I couldn't ask for anything more. While chatting in the middle innings, though, jones' eyes got wide in a mixture of fear and fascination. My initial reaction was assuming two raccoons were making love behind me, such was his face.

"You know what the Reds should do?"

I had no idea.

"They should get Barry Bonds out of retirement!"'

And yet, we're talking seriously around here about Adam Dunn providing ~.350 OBP with a few dingers and no defense. Is there any doubt that Bonds could do the same thing at age 50? Some folks on Red Reporter want to see what Neftali Soto can do in an extended look. Is there any chance he's better than a player who made his big-league debut before Soto was born?

Can you imagine how upset the Reds' media landscape will be?

Can you imagine Joey Votto talking hitting with Barry Bonds?

Did you know that rhetorical questions are used as a device when the writer has no supporting arguments and instead turns the debate by challenging the reader?

The Reds need someone who can play 1b twice a week and pinch hit as a lefty power threat. Bonds is just standing there, waiting for the phone call. Or text. Or Whatsapp, whatever people do these days. He'll probably cost the major-league minimum, plus a few million in perks (especially the ventriloquist dummy and ventriloquist he gets to give the media surly answers in his stead. Those things are pricey).

For what it's worth, we asked Luke Moran and El'Hajj Muhammad what they thought: 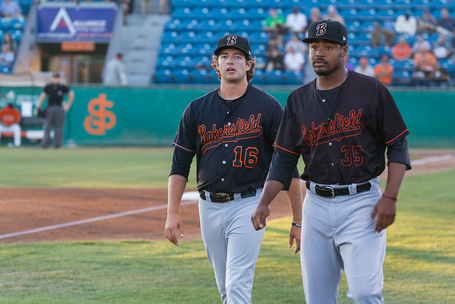 In other -- some would say actual -- news, Todd Frazier and his dingers will be at the Home Run Derby. "But it'll ruin his swing!" you cry, and "THAT swing?" I'll respond. It'll be nice to have some Reds representation there. His brother Charlie will be throwing to him, but that's only because Marco Estrada declined the offer. SBN/MLB has a nice youtube of his homers of yore.

Worth linking to Rosecrans' BAR, not just for the Hamilton enthusiasm but also for the citing of our very own @T00NTOWN.

Roger "Bob" Bernadina is now in the Dodgers system.

If you missed it, the Reds got 24-year-old 1b Harold Bellefonte Riggins from the Rockies for Jair Jurrjens. 24-year-old 1Bs in A+ Bakersfield aren't that impressive, but dudes with the middle name "Bellefonte" are very impressive. So we'll see how this works out. Since it basically cost a couple airline tickets for Jurrjens, it's a nice little pickup.

Jay Bruce talked to Eno Sarris about hitting, which was about as awesome as one might expect.

One of the greater bummers there is in life is realizing that someone's great only when they pass away. I never knew much about Jim Brosnan, but he sounds like a Cy Fave. To wit:

Candlestick Park is the grossest error in the history of major league baseball. Designed at a corner table in Lefty O'Doul's, a Frisco saloon, by two politicians and an itinerant ditch digger, the ballpark slants toward the bay—in fact, it slides toward the bay and before long will be under water, which is the best place for it.

Land use aside, he was a great reader and great writer. John Schulian has a great retrospective over at Deadspin. I want to save all the good quotes for you to read over there, about how writing made him a more confident pitcher and person. It's a great little write up, and thanks to BK for bringing it to the Reposter. Please read it.

Five different Mets have lived in the same apartment in Manhattan this year, David Roth realizes. I'd say that the place is cursed, but on the other hand, four dudes have been able to get away from the Mets, so good for them.

If you're like me, you love and miss alt weeklies. Eugenia Williamson has a great short history/memorial for The Alt Weekly over at Baffler.

Textastrophe is my favorite stupid funny website of the week.

Finally, Eric Nusbaum has a fantastic article over at VICE: Billy Beane is not Human. Nusbaum calls Beane's WSJ op-ed "the least joyful, most insane thing ever written about baseball" which is Vice-ful of hyperbole, but pretty accurate. Beane talks about metrics being drilled down to the Pony League level, to quantification of personalities to forge a team's chemistry. It's very much part-and-parcel of these days' weird obsession with stat-based euthanasia and dismissing of the human element, and it's also very not fun. Nusbaum kinda nails it in the conclusion:

Baseball has its own form: without the Oakland Athletics, without Moneyball, without Statcast. None of those things can exist without baseball.

Baseball is wonderful, weird, and not purely quantifiable. And that's okay! And that's also why the Reds need a 50-year-old first baseman.