Welcome to the Reposter Up All Night! Where the Reds will go a legit two weeks without a win.

Due to the afternoon getaway game in Milwaukee, the Reposter's coming atcha tonight. If you're looking for good baseball, your best bet is probably the currently-underway Dodgers/Pirates game featuring Danny Haren taking on Francisco Liriano.

The Reds have Thursday off. This is important, because everyone on the Reds is ailing. Cozart was hit on the finger by a pitch yesterday, and even though there was no structural damage it's hard to grip and throw a baseball when you have an Oscar Meyer wiener hanging off of your palm. Kris Negron was hit in the head by an attempted pick-off throw, which seems a bit mean-spirited to say the least but apparently he's okay. Todd Frazier is the only member of the Reds' infield to make it through unscathed so far. Is this because he is indestructable, or because he cursed everyone else?

Speaking of amateur drafts, the Reds signed a 16-year-old German shortstop named Nadir Ljatifi.  He's hitting .296/.412/.370 for the 2.Bundesliga (basically, junior) Untouchables Paderborn team. He was born in 1998, a year I still own t-shirts from, and looks like this: 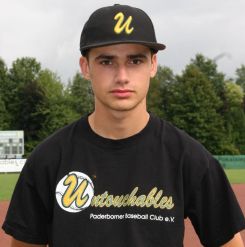 Jamie Ramsey has an updated list of Reds at-bat music, featuring Joey Votto's new walkup song and Tony Cingrani's jams, both of which kinda bum me out right now. Still, I know folks are interested in this, so here it is.

Wendy Thurm has an interesting look at teams' television ratings comparative to their markets. The Reds seem to have the smallest market and have lost ~20,000 viewers per game since 2012. They're still about middle-of-the-road in the MLB, though. Interesting read.

Grant Brisbee looks at the managers most likely to be fired. It is not Bryan Price.

The St. Louis Cardinals have announced a change of Spring Training home venues. "It's a bit far from some of the other teams, sure," Matt Matheney explained. "But what can I say? We're comfortable there."

If you read one baseball article this week off of Red Reporter, it simply must be Erik Malinowski's oral history of Tom Emanski. Most amazing -- to me, anyways -- is how he basically conned ESPN into free advertising for over a decade. He's the only person I know to have beaten ESPN.

Not baseball, but Sam Fayyaz's story of early American soccer and midwestern weird typologies is very much in Red Reporter's happy zone. Also fun to note that @BestFansStLouis is basically a century-old phoenomenon.

Pete Beatty writing about Ohio is must-read for everyone, I do swear.

You either will or will not read "Here's the Story of How They Made the Guy's Head Explode in Scanners." Up to you.

Upon watching this Instagram vid (I'm like the last person to get into Instagram, but check me out!), I wondered when was the time I came closest to making an entire gym jump out of their seats with a sick-nasty move. I don't think it happened/will ever happen. I did have an awesome lacrosse game in high school in front of my ex-girlfriend, which was pretty rad. One time we were playing pickup soccer downtown in the center of the suburb I grew up in and I backed down the defender, took a pass and flicked it over both of our heads, turning around him and rolling the ball into the goal/garbage can. That was pretty baller. But still. Nothing like that.