The San Diego series frustrates again, but there are a lot of other things to be happy about.

By the time this is published, the Reds already wrapped up their series with the Padres. Who knows? Maybe the Reds actually won a game. They really should, what with Cueto on the mound and all. Anyways, despite losing a couple games in varying forms of frustratability, things aren't so bad.

For example, Jack Hannahan's getting healthy. Scoff if you will, but he is a lefty corner infielder and a bench bat more cromulent than the chaff being run out there (2013 stats besides). Heck, as you'll note in that Sheldon briefing, even Mike Leake is getting pinch-hit and pinch-run consideration. So come back, Hannahan, and bring your smiles.

Eno Sarris has a nice little writeup on Devin Mesoraco. In it, Sarris notes that catchers are often a bit later to come up to the bigs, but their aging curves are basically the same as any other player (interestingly, shortstops are on-average the youngest callups, most likely because the young guys have the best range). Devin's obviously put in a lot of work not just as a hitter but as a defender, and while he's no Hanigan he's hardly holding back the team. He's had some great blocks and he's clearly using his athleticism. It's been great watching some life breathed into the Golem this year, and I hope it continues.

The Bats Signal, which is a Louisville Blog,

has some nice things to say about Dave Holmberg. Apparently Holmboy's FIP has been pretty average and his peripherals ain't bad; he just had some rough goes at it in the start of the year when he was getting settled with a new staff. He may be called up on July 8 for the doubleheader against Chicago, so it's nice to see that things are being put together by him.

. The 2013 draft pick hasn't been the chainsaw made up of thousands of miniature chainsaws welded together with an arc welder that is also a chainsaw that he was in Billings, Dayton, and Bakersfield, but AA is often considered the toughest jump to make. He's still striking dudes out, but he's not getting as many folks going for his junk outta the strikezone. It'll be interesting to see how he develops the rest of this year.

Doug Gray went to Chattanooga to watch some, well, not baby Reds but infant Reds. Reds with feet too big for their bodies and weird ways of putting words together and I dunno just straining the heck out of this metaphor. Anyways, he thought Michael Lorenzen was impressive, as was Carlos Gonzalez. Good stuff.

Donald Joseph, once traded for Broxton, was DFAd and is now a Marlin. Both pieces traded for ol' Broxy (JC Sulbaran being the other) have been dropped from the Royals payroll. Brox has been good, too. So, nice job, Walt!

Yakkin' -- which is one of my favorite things but apparently nobody else likes? -- takes on Jumbo Diaz. David Roth used to write Topps cards, and harks back to those he wrote. David Raposa asks if Newton's laws of physics apply to Jumbito.

Okay, just a few more and then I'll (maybe) shut up about soccer. You know this photo? 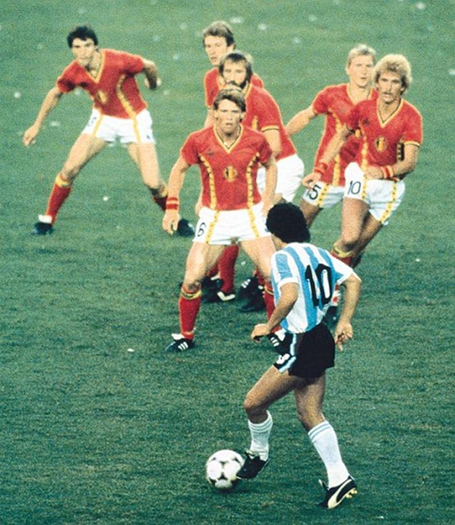 It's purportedly an image of how badass Diego Maradona is/was. Flip Flop Flyin', who always does great stuff, went into the hidden history of the photo, which is actually a bit mundane. Still, awesome photo.

Nathan Thornburgh at R&K channels, erm, Hockey, when introducing American fans to the glory of losing. We don't know shit about losing. For example, Chile: 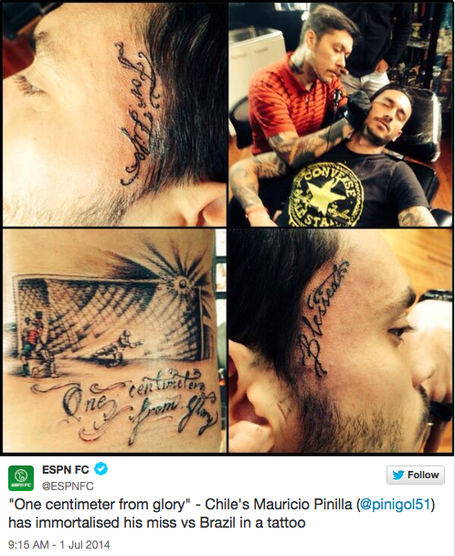 Getting a tattoo of the goal you should've scored is some next-level sullenness.

My maybe-favorite article I've read this week is about Bosnia's/St. Louis' Vedad Ibisevic. Chase Woodruff could've simply told an immigrant story, but instead he talks about St. Louis' fear of newcomers, the public school/private school divide in the city, and how non-whitebread St. Louisians are seen as less-St. Louis than others. Long story short, it's a damn shame that Vedo isn't celebrated by the city as a whole, while freaking Brad Davis is. The Bosnians of St. Louis are the goddamn American Dream and Grbic's is one of the best things in the city and the Best Fans Type are terrified of them. So you'd eat this sort of thing up.

And, unrelated but always fun: An interview about the making of Top Secret!, one of the funniest movies there is. A goofy Reddit thread about "the best Conspiracy Theory that you just made up, but sounds convincing." And finally, for you nostalgists out there, MSDOS gaming memories, including the fantastic Monkey Island soundtrack.