The Yankees are vulnerable.

Share All sharing options for: Series Preview: Reds at Yankees 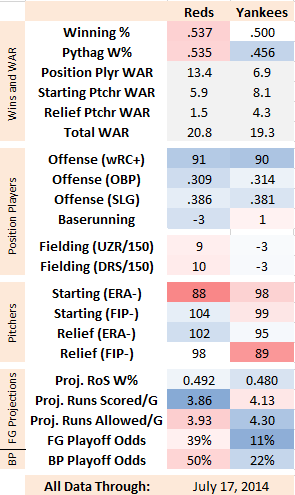 Welcome to the second half!  Well, not the real second half.  That actually started on June 30th.  But anyway...

The Reds kick off the second half in style, heading to the Bronx to take on the Yankees.  I know that most teams are a little bit banged up, but it seemed like the Reds needed the rest more than most would.  Their opening stretch was a six-game road trip that has them traveling to Milwaukee after they finish up in New York.  They begin just 1.5 games behind the Brewers, so if the Reds play well they could legitimately overtake the Brewers on this trip!

Fortunately, while they are still a team capable of giving the Reds some trouble, the Yankees aren't quite as tough of a match as they used to be.  Their once uber-powerful offense has been much diminished from what it used to be, and they've actually posted a lower wRC+ than the Reds!  That's no small feat; we know how much the Reds offense has struggled at times this season...and it's especially surprising given that the Reds' number includes pitchers as batters and the Yankees get to have a DH.

Their pitching has been good this season, but is currently in a state of shambles.  Rookie of the year contender Masahiro Tanaka went on the DL with an elbow ligament injury.  He joined fellow rotation members CC Sabathia (knee), Michael Pineda (back), and Ivan Nova (elbow) on the DL.  The Yankees did pick up Brandon McCarthy, who the Reds will see, and still have the dependable Hiroki Kuroda (who the Reds also see).  But the rest of their rotation is Shane Greene, Chase Whitley, and David Phelps.

The new Yankee stadium is a bandbox, ranking 5th in the major leagues in its regressed 3-year park factor (behind Rockies, Rangers, Red Sox, and Blue Jays).  As you can see in the comparison to GABP below, that's particularly pronounced in right field, where the fence is extremely shallow.  As a result, left-handed batters have very elevated home run rates, which drives a lot of the effect.  Hopefully this will be a good chance for Jay Bruce to start rolling! 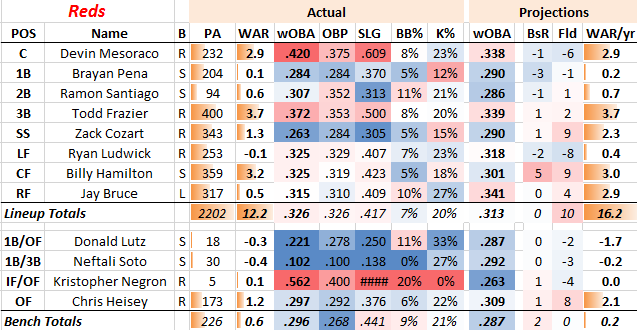 The losses of Joey Votto and Brandon Phillips have this Reds offense looking awfully mediocre right now.  Frazier and Mesoraco have been beats thus far, and each have already produced WAR equivalent to what we'd project for them for an entire season.  I don't think we can expect their performance to continue on this level, but I'd expect that they will continue to hit.  Jay Bruce has looked better, mostly, since he went through that horrible stretch, and I'm hoping to see a strong second half from him.  Billy Hamilton has been everything we could ever hope for, especially in terms of his power production.

But I don't have a lot of hope for the Rest of the lineup.  It would sure help if Ryan Ludwick could go on a tear and (if Price opts to play him there, which I think he should) more or less takes over the first base position until Votto comes back.  That would get him out of the outfield, where Heisey has a much better glove...and keep Bruce from having to play out of position, allowing him to continue to excel in the outfield. 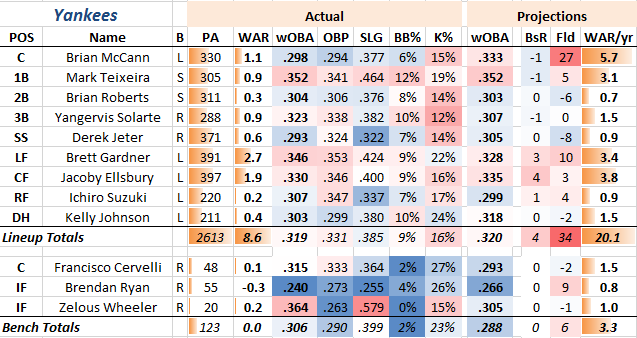 The Yankees have offensive problems of their own.  Some of that can be linked to injuries, suspensions, and the like.  Carlos Beltran, for example, is currently out with a concussion.  And Alex Rodriguez, though not the player he once was, is suspended for the season (hence Yangervis Solarte).  But they also have a pretty old lineup.  Brian Roberts, Derek Jeter, and Ichiro Suzuki were all once outstanding players, but now are below-average hitters.  Alfonso Soriano was recently released for being terrible.

Their main offseason signees, Brian McCann and Jacoby Ellsbury, have been pretty solid, but certainly not what they'd hoped.  McCann, in particular, while he's lighting up the catcher framing reports, has turned in below-average production thus far at the plate.  Brett Gardner and Mark Teixeira are still both above-average players.  But McCann aside, there aren't a lot of guys here that you would look to and hope for a breakout in the second half.

Coming out of the All-Star break, the Reds don't get to benefit as much as we might hope from the Yankees' injury-riddled rotation.  David Phelps is listed on mlbdepthcharts as their #5 starter, but he will be their first starter out of the gate.  He's a bit of a fly ball guy, which won't translate well in Yankee Stadium.

Brandon McCarthy is interesting.  His projection is pretty lousy, as is his ERA on the season.  But this year, however, now several years removed from his severe head injury, he entered spring training with more muscle and suddenly has gone from throwing 88-91 to averaging 93 mph on his fastball.  His strikeouts are way up, while he's retained his excellent walk rates and ground ball rates.  So which thing will happen first?  Will his peripherals regress to his career norms, or will his ERA trend back to his xFIP?  He's a neat case study, and the fact that he will have a separate line with the Yankees will make it easy to evaluate later on.

Hiroki Kuroda just keeps on keepin' on.  Now 39 years old, he's showing a slight drop in his strikeout rate.  But his other numbers remain very good, and he's continue to produce right around where you'd project him to.  He's a solid mid-rotation guy. 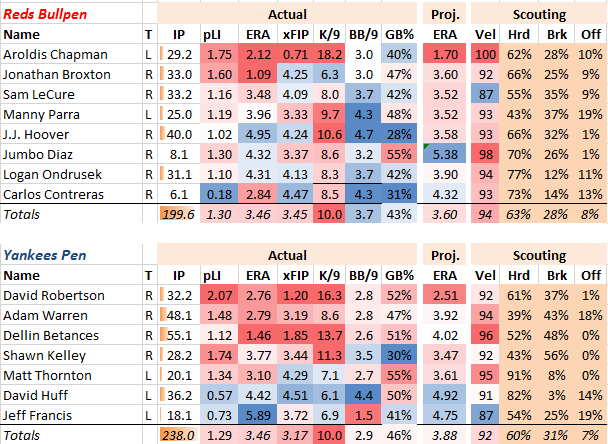 Jumbo Diaz has arrived, and he's been pretty good so far!  He's been a little homer-prone, but the velocity and strikeout rate have been there, and he hasn't seemed to be an extreme fly ball guy.  His projection is terrible, but his projection doesn't know about his weight loss.  I'm hoping the Reds can get a solid season or two from him.  Also: I giggle every time I look at Aroldis Chapman's line.  But then I think of him in the rotation, and get sad again.  #deadhorse

If there's one bright spot on the Yankees, it's been their late inning relief.  David Robertson has been outstanding as their closer, as you'd expect him to be.  Adam Warren and Dellin Betances have been superb in middle relief.  With Betances, we're finally seeing that potential we expected to see when he was a starting pitching prospect.  But it looks like he's found himself a home in the bullpen.

The Reds have played their way back into contention.  Now, the question is where they will go from here.  While any given series can go any number of directions in baseball, they have a solid shot of winning this series against the Yankees.  If they can do that, and then play well against Milwaukee, happy times could be coming.  It would seem to largely come down on whether the offense can do anything for the time being.  I really think the Reds need to work a trade of some sort to get a bat.  I'm not sure what is available, and I'm not sure what it would take to get those who are available.  But if the Reds are going to be serious about contention this year--and they are right in the thick of it, so why not be serious?--they need more offense.  Let's hope Walt can work something this month!