bbjones provides the pictures, I provide the words, and you provide the eyeballs as we stretch through the All-Star Break with some minor-league news.

Share All sharing options for: Welcome to the Incubator: Bakersfield Eyewitness Report

San Jose is very much one million people who don't have a clue what San Jose is. It's a nice place to watch a A+ California League game against the Reds' affiliate (the Bakersfield Blaze), to be sure, but it is tough to figure out what else the city wants to be.

So a shiny mid-rise downtown sits next to googie strip malls and post-war brick warehouses. It's not that there's no coherence - few cities have that - but there's no narrative or attempts to string it all together. San Jose seems to hope to defy history, because its history proves the lie. The Silicon Valley of crackshot entrepreneurs getting by on grit and enthusiasm is belied by eight decades, give or take, of taxpayer funding of technological advancement through military contracts and university grants. For example.

It's not to hate on this, because, I love technology! I love inventors! Especially since me, my parents, and my grandparents all paid for them! Anyways, its a narrative that conflicts with a sport as history-imbued as baseball.

The San Jose Giants' Municipal Stadium is a beautiful recall to some past drinking bubbly beer in a pork-pie hat. Most every sign in the park is hand painted, and the ads on the outfield walls range from dry-cleaners to Yahoo!. It would look over-precious in a 15,000-seat AAA stadium, let alone an MLB park. But it'll work on a July evening on the edge of California's third-largest city. 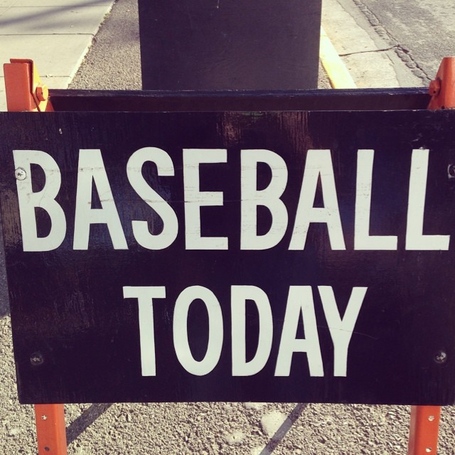 Me and bbjones were scheduled to meet at the famous BASEBALL TODAY sign. But since we were caught in the same intestinal tract of traffic, I beat him by about 15 minutes, which I spent leaning on the Bakersfield Blaze team bus and listening to the San Jose State University Marching Band practice in the mid-distance. It's fantastic waiting for somebody in a college town in the summer, since there's so much to listen to and so much to look at. Anyways, it wasn't long until I was looking at a man with a camerabag and good hair. We shook hands, he was kind enough to laugh at my jokes and buy me a ticket with a buy-one-get-one-free coupon (bad for dates, but good for baseball!) and take me into the stadium, where we snapped pics of the mighty Blaze's lineup. 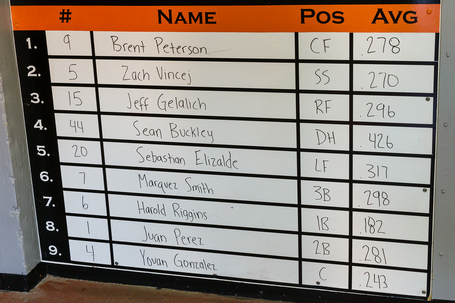 It's, well, they miss the call-ups. But Elizalde is an intriguing character, and Harold Riggins was the return in the Jurrjens trade. And it's baseball, fer cryin' out loud. It's worth watching.

Harold Riggins deserves a mention. The seventh-round pick out of NC State has always hit for power, but he's struggled so far as a 24-year-old in A+ after putting up some good numbers in the Rox' AA. Which is all whatever because his middle name is Bellefonte. He'd be in AAA right now if he went by Bellefonte Riggins, I'm sure.

Anyways, if you want a spoiler alert, here's the box score. 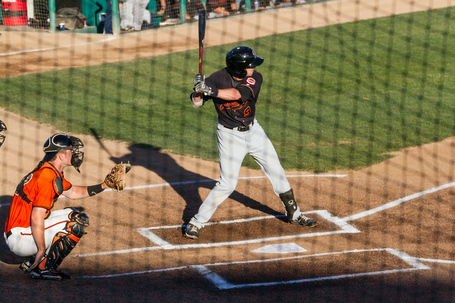 Brent Peterson led off and had himself a day. The Florida product is a) Floridian and b) can take a walk, so I'm going to compare him to Ryan Freel. He's got a cute compact swing, can steal some bases, and get on base when healthy, so I'm hoping he can continue to do well enough to start next year in AA and get farther than the Josh Feilhauers and Sean Henrys before him. 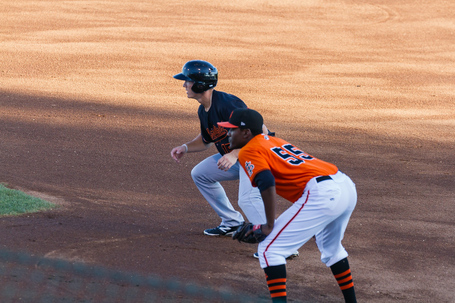 Jeff Gelalich is, first and foremost, pronounced "Jell-ah-litch." Secondly, that sounds sort of like "sandwich." Thirdly, he's made it to A+ despite never hitting a lick and being the third first-round pick in the Travieso/Wnker/Gelalich 2012 draft. But watching him in RF, you can see the tools. He absolutely glides as a fielder and has a cannon for an arm. His power has come around a bit, but he's only 6'0 and unless he goes through an age-24 growth spurt it's hard to see him figuring into things. He's gonna have to OPS over 700, even with his solid D. 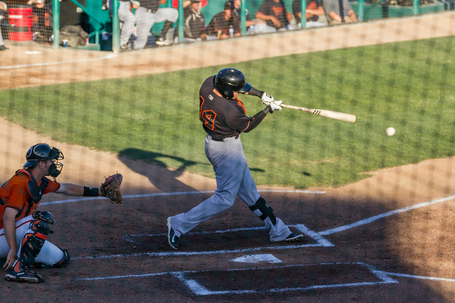 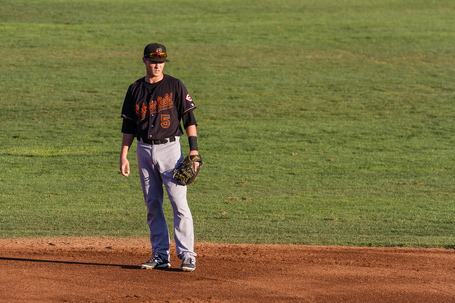 Zach Vincej is probably a very swell dude, and was Jon Moscot's shortstop at Pepperdine. He can play a competent shortstop and take a walk. He'll have to do at least one more thing in order to get MLB playing time. 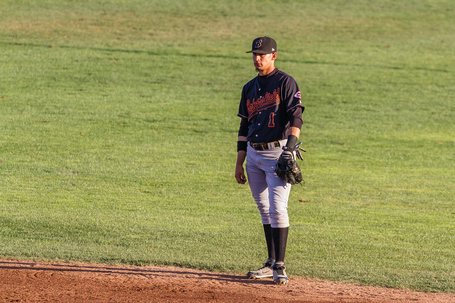 Juan Perez was drafted as a shortstop hitting over .300, but now he's a second-baseman hitting .270. Going through these pictures, you realize how many of these guys won't make it. Even the guys wearing the #1 jersey don't have much of a puncher's chance. So really, this is their one shot to grow MLB-level goatees. 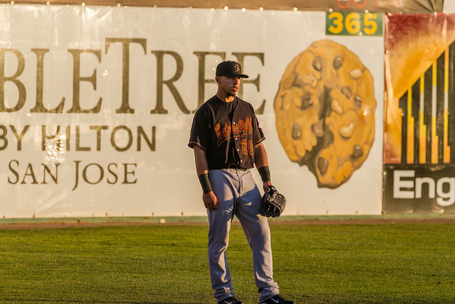 Sebastian Elizalde has an awesome name and is hitting ,294/.384/.424. While more power would be nice, he'd adjusting well and played a solid LF. However, he couldn't wait to get back to the hotel and get some cookies. If only he could figure out why... 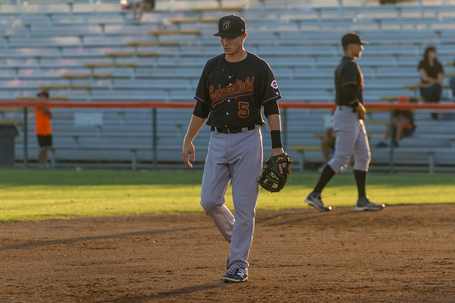 Whatever I may say about Vincej's bat, he has good bone structure in his face. 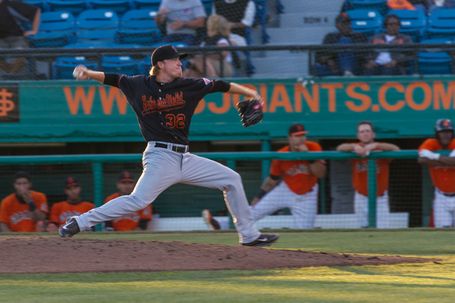 Danny Wright's game is pinpoint control, but that'll leave him open to hits as it did on Tuesday. He couldn't rack up the strikeouts and he was stuck pitching behind singles all game. It cost him. That said, I respect a guy whose hair color matches the uniform. 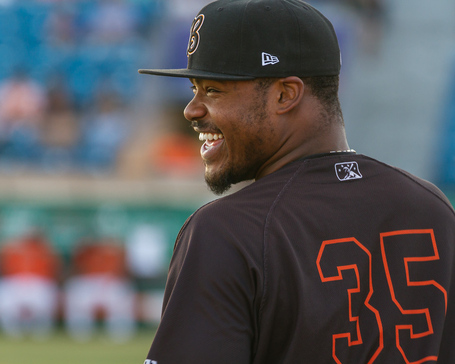 He's on the comeback trail after messing up his arm last year. bbj cajoled me into saying hello and telling him I took his twitter pic. Little did I know, he changed his twitter profile since the last Twitter redesign. So it was a bit of an awkward conversation, as he had no clue what I was talking about. And more importantly, didn't care. Still, nice guy. I also have his autograph somewhere. He pitched a scoreless ninth, too. 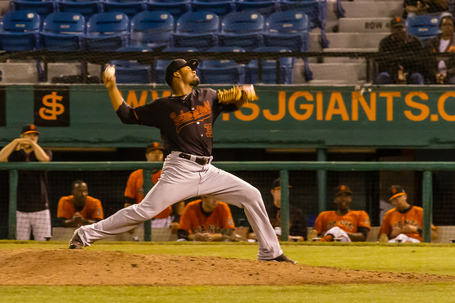 The light's a whole lot better at nighttime, eh? When the game started, I wrote down "sun-dappled" in my notebook and underlined it twice. It was a beautiful afternoon for a game that turned into a beautiful evening, as jones' pics can attest. 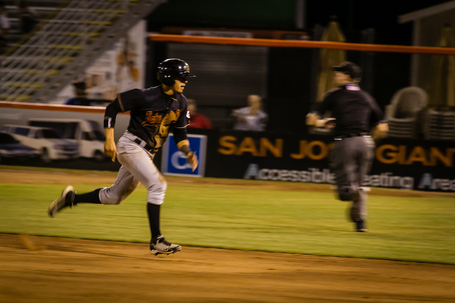 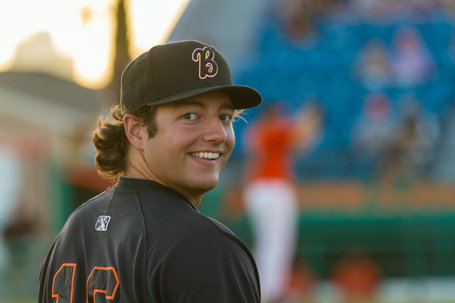 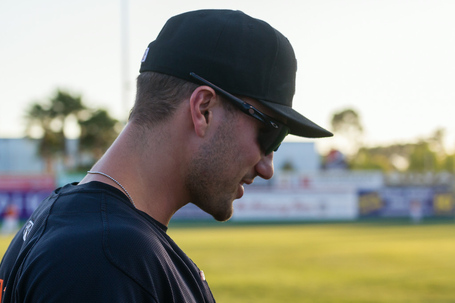 We also had some expensive Lagunitas and I had a great pulled pork sandwich, which he was shocked he said shocked to see someone eating. Luke Moran was just hungry (he asked some kid for a chicken sandwich earlier in the game). 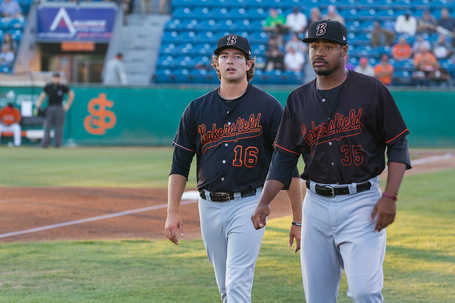 So San Jose's inherent weirdness aside, it was a great night for a game. I love the "SJ" wordmark you can see in that last pic, too. It's too large and too important a city to be so bland, but I'm not sure anyone realizes it yet. The prices weren't much off MLB costs ($14 for a ticket, $8 for a beer), even with accessible parking. What's the plan San Jose, are you going to be a big-league city or seem like a big-league city?

But all that, big-league or no, is baseball in the summer. We'll be seeing Elizalde soon enough, maybe. It'd be neat to say I saw him in the cozy confines when.