The Reds look to finish the first half strong against another would-be NL Central contender.

Share All sharing options for: Series Preview: Pirates at Reds 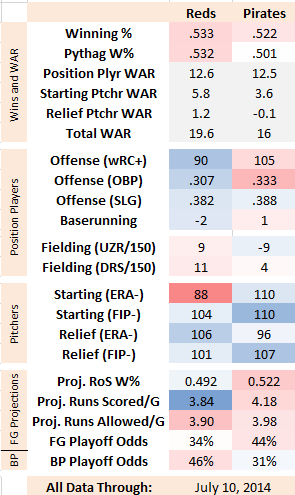 A battered and bruised Reds team welcomes the Pittsburgh Pirates in the last series before the All-Star break.  The Reds did what they were supposed to do against the Cubs, but are again hamstrung by injuries.  Joey Votto is out for an indeterminate amount of time, Brandon Phillips is out until late August/Early September following thumb ligament surgery, Homer Bailey left yesterday's start with a strained knee, and Billy Hamilton is questionable for this series with a strained hamstring.  It's been brutal.  Again.

The good news is that, despite being swept by the Padres last weekend, the Reds have played themselves back into the NL Central race.  The Brewers are struggling mightily, and as a result the Reds have been able to creep to just 2.5 games out of the NL Central lead.  An optimist would say that the past 30 days or so demonstrates just what the Reds can do when they're healthy.  The question now is whether they can survive until Phillips and Votto get back, keeping pace with the sputtering Brewers and the injury-plagued Cardinals.

The Pirates are also in the picture, just one game behind the Reds.  As I noted the last time they faced off with the Reds, the Pirates are sort of the opposite of the Reds: good offense, but struggling pitching.  FanGraphs and Baseball Prospectus differ a bit in how they rank the two teams' chances over the rest of the season.  FanGraphs likes the Pirates roster more over the rest of the season, and as a result give the Pirates a 44% chance of making the playoffs vs. the Reds' 34% chance.  Baseball Prospectus, on the other hand, rates the teams as virtually equal the rest of the way, and therefore give the Reds a slight nod based on where they sit in the standings.  The takeaway, I think, is how volatile these playoff odds are: one win difference in the standings can drive your odds 5-10% up or down given how tight the NL Central is right now.  It makes me wonder if they're a bit too sensitive...  In any case, I'll gladly take a 35-45% chance of making the playoffs this year.  After all, at one point, the Reds were under 10%! 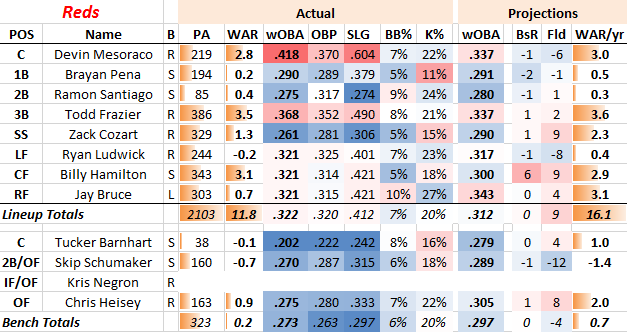 Yikes.  As much as I think Brandon Phillips is a bit overrated by Cincinnati Fans & Media, the Reds are going to miss his production.  It looks like we're in for six weeks of some combination of Ramon Santiago and Skip Schumaker at second base.  I guess I'm partial to Santiago; for all the playing time that he's received, Schumaker has done absolutely nothing at the plate this season, and is a significant liability defensively at second base.

My hunch is that we're going to see more of Ludwick now as Price goes searching for some offense, and I really hope they give him a significant amount of playing time at first base.  Todd Frazier and Jay Bruce are both excellent defensive players at their position, and it is foolish (in my view) to move them to first base and out of their position.  Ludwick, on the other hand, is a poor outfielder at this point in his career, and, assuming he can learn the position quickly, should hurt the Reds less playing there than elsewhere.  My impression of Ludwick is that he has good hands but poor range, which (if I'm right) makes him a good match for first base.

Good things: Both Billy Hamilton and Jay Bruce have their wOBA's over league average.  Yay!  Hamilton and Zack Cozart have +13 and +15 UZRs that are driving up their WAR.  I'm a little skeptical about Cozart's rating, but Hamilton's might not be too far off.  He's really fast, and seems to be getting good jumps and taking good routes too (if I believe the tv commentary--it's hard for me to tell when watching tv).  Also, Devin Mesoraco is STILL wOBAing 0.400+, and he's cleared the 200 PA mark. 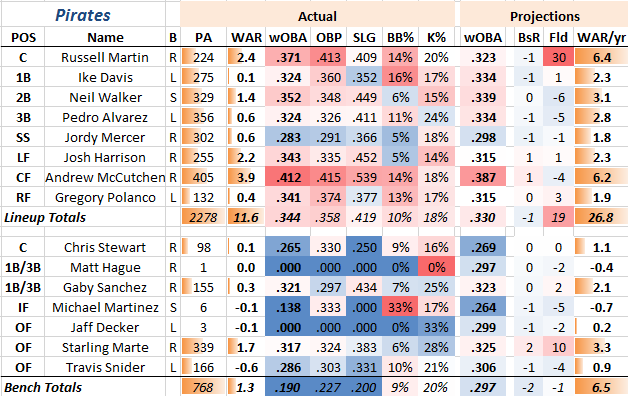 The Pirates' roster is a bit of a mess right now due to their situation in the rotation.  MLBdepthcharts is showing 7 bench players as I write this, and I'm just going with that.  I'd guess it might change when they get Liriano on the roster.

The headline has to be the amazing season of reigning MVP Andrew McCutchen.  When I talk to my pirate-fan friends, they often note that he got off to a slow start this season.  But he's rebounded so well that he now has better offensive numbers than last year during his MVP season.  The only reason his WAR isn't absurd is that UZR currently has him at a surprisingly bad -10 runs.  UZR has been very up-and-down on him throughout his career, so I'm inclined to regress that a lot toward the mean.  He's amazing.

We last saw the Pirates when Gregory Polanco was just breaking in with the club.  Now 132 PA's into his major league career, he's still going strong.  He's showing superb walk rates that lead to excellent on base skills, good contact rates...really everything you could hope for.  He's not showing a lot of power, but the Pirates have other sources of power.

Starling Marte is on the bereavement list, but seems probable to appear at some point in this series(?).  Neil Walker is back form injury now, and Jordy Mercer seems to be inching his batting like back toward respectability.  Russell Martin has become an on-base machine, and contributes a lot behind the dish as well (BPro loved his framing at the start of the season, and currently has him at +12 runs).

The Pirates' rotation has been decimated by injuries this year, but the Reds get pretty much the best of what they have to offer.  Jeff Locke has been quite good since returning to the club, and this time her peripherals match his results: he's not walking anyone and getting tons of ground balls (edit: sorry about the mess-up on the conditional formatting for his ground ball rate--it's fixed now in my spreadsheet), which makes up for his poor strikeout rate.  Charlie Morton is still a ground ball machine, and Francisco Liriano has likewise been getting tons of grounders.  A bit part of how the Reds fare in this series may depend on whether they can elevate the ball against these guys.

I wonder if we should worry a little bit about Mat Latos?  His fastball velocity is down 2 mph compared to prior years, he's not striking guys out, and he's allowing a lot of fly balls.  About the only thing he is doing well is avoiding the walk.  It could be that he's still not up to full strength after dealing with so many injury troubles earlier in the year.  It's a small sample, so I dunno, but I have my eyebrow raised.

Also: I love Johnny Cueto. And I am so impressed with Mike Leake. 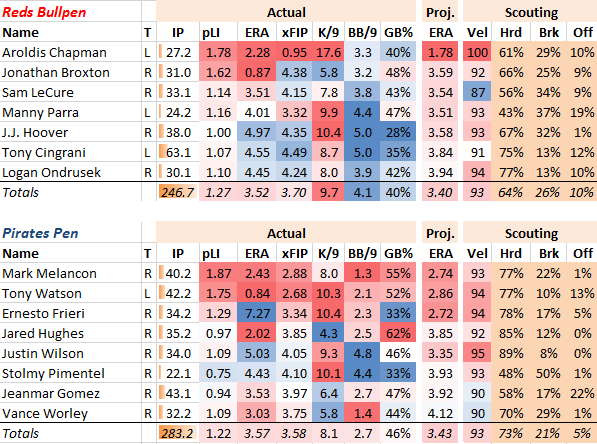 One of the big questions for the second half is what the Reds are going to get from their bullpen.  Relievers are notoriously volatile in their performances.  But if you look at the Reds' bullpen, they have precisely two pitchers with xFIPs under 4.00: The astonishing, stupendous, amazing Aroldis Chapman.  And the very-solid Manny Parra.  That's it.

The guy I'm most intrigued with is Jonathan Broxton.  Broxton has been spectacular this year in his ability to avoid the run.  Yesterday, however, thanks to so bad luck (he deflected the ball that led to an infield hit) and a well-hit ball (a double), he gave up the tying run.  I worry that a quality ground ball rate alone might not be enough in the second half.  I am heartened, at least, to see Sam LeCure's strikeout rate creeping back up from its early season lows.

As for the Pirates, they have jettisoned the old and suddenly ineffective Jason Grilli for the apparently BABIP-strikened (not to mention young) Ernesto Frieri.  Grilli was fun while he lasted, I really like that deal for them.  Frieri is posting some of the best peripherals of his career, and I see no reason to not expect him to rebound.  He'll join the very effective back of the Pirates bullpen with Mark Melancon and Tony Watson.

The Reds need to do well in this series.  It's certainly not make-or-break, but winning this series despite the loss of Phillips would be huge going into the All-Star break.  Losing the series--and especially a sweep--would be a kick in the teeth.  The Pirates look like they have pretty strong match-ups for this series...so I'm a little worried about it.