From the Worst to the Best in the West

Share All sharing options for: Series Preview: Giants at Reds 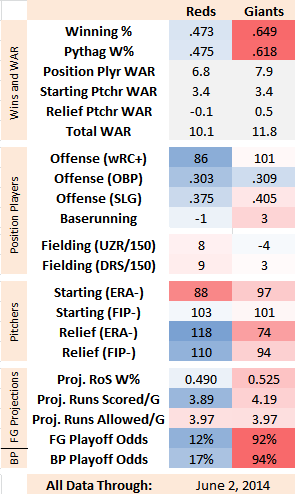 On the heels of a three-game winning streak and winning western road trip, the Reds return to Great American Ballpark tonight to welcome the San Francisco Giants.  The Giants are smokin' hot, having won 8 of their last 10 to perch a full 7 games above the preseason favorites in their division, the LA Dodgers (essentially the same difference between the Reds and the Brewers).  They have the highest winning percentage in baseball, and it's really not even close.

The thing about the Giants is that, while they look like a very good team, they don't look to me like an amazing team.  That's true of both their personnel and their underlying performances.  They only have a 1.7-WAR lead over the Reds, which they gain from a substantially better offense (though it's not amazing, 4th in the NL by wRC+)  and a superior bullpen.  Their pitching has been comparable, or even slightly worse than the Reds', and they haven't fielded the ball as well.  Their third-order winning percentage at BPro shows them as well above-average, and the best in the NL...but about four wins shy of where they currently sit.

So, they've probably gotten a bit lucky thus far.  That doesn't meant that they're not a good team, or even a very good team.  But we should probably avoid hyperbole when describing their talent level. 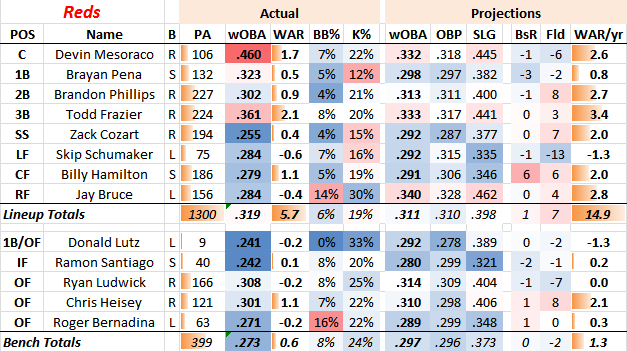 I'm following mlbdepthcharts' lead and plugging Skip Schumaker in as the "starting" left-fielder, at least against right-handers.  I don't really have a problem with Ludwick becoming a part-time player, but I'm not at all convinced that Schumaker is the guy to whom Price should give that extra playing time.  He historically has done a good job of getting on base.  But that hasn't really been the case this year; his walk rate is down a point, and he hasn't exactly been raking average-wise.  He also has no power, and consistently posts poor defensive numbers (-13/yr projection, -5 UZR across the outfield and 2B so far this year).  I think, sort of like Brayan Pena (who hit the ball in Phoenix!), Bryan Price is a bit overly-enamored with him.

I'd like to see Chris Heisey continue to get playing time.  I'm not sure if he'll hit a lot better than the other guys, but he can at least play plus defense in the corners.  I can't really complain about 121 PA's, but I worry that Ludwick will be likely to get a lot of those AB's.

And get well soon, Joey Votto!  Hope you can figure it out soon, Jay Bruce! 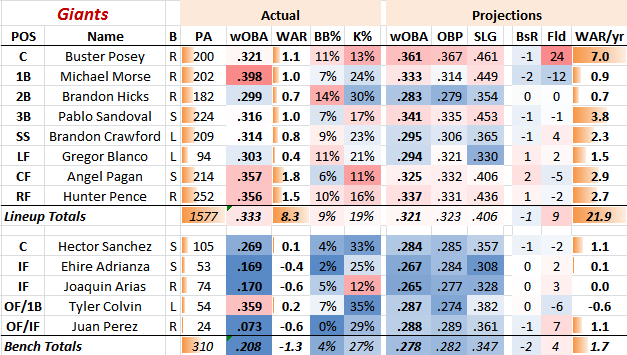 After posting a -1.6 fWAR season last year, Michael Morse is off to a heck of a turn-around this year.  As you might expect, his BABIP and HR/FB rates are higher than his career rates, but not really far out of norms.  His walk rate is a bit higher than usual as well.  I don't think he's a different player, but just that he's had a really nice two months.  And with Brandon Belt on the DL, Morse hurts the team a lot less defensively by playing at first base.

The Giants have also gotten excellent performances from the perennially-underrated Angel Pagan, who is having a nice rebound, as well as notable Reds nemesis Hunter Pence.  Pence is basically doing exactly what he did all of last season, when he was worth in excess of 5 wins.

I'm pretty sure that, based on his preseason weight reports, this was supposed to be a good Pablo Sandoval year.  He had a really tough first month, and I noted that on May 8th, his strikeout rate had risen as high as 22% while wOBAing 0.240.  He's made a nice turn-around since then, however, and is regressing quickly back up to his career norms.  So, maybe a good year isn't out of the question after all!

Even though Tim Lincecum only throws about 90 mph these days (he was throwing 94 when the broke into the big leagues), his strikeout rate has barely wavered over his career: he's basically been in the 9-10 k/9 range since 2007.  What has varied, however, has been his walk rate.  In his heyday, Lincecum posted a high-2's, low-3's walks per nine.  Since 2012, however, he's averaged about 4 walks per nine.  I don't know if that's because he can't command the ball like he used to, because he was to be more careful and live on the corners now, or because hitters can lay off pitches on which they used to swing and make weak contact.  Or maybe it's all of the above.  Either way, he's not the pitcher he was...but he's still a decent mid-to-back of the rotation starter, which is where the Giants are using him.

Ryan Vogelsong, now in his age-36 season(!), is having a decent rebound after seeing his strikeout rate drop below 6 k/9 last year.  But he's become an fairly extreme fly-ball pitcher without a lot of strikeout stuff.  I don't know how much longer he'll throw in the big leagues...but it's worth noting that I've underrated him throughout his stint with the Giants.

Madison Bumgarner, on the other hand, is the guy I've been infatuated with since his debut in 2009.  He's still only 24, still doesn't walk anyone, and this year is posting a 10.5 k/9 rate.  He's scary to face, but fun to watch.  The Reds have their work cut out for them on Thursday. 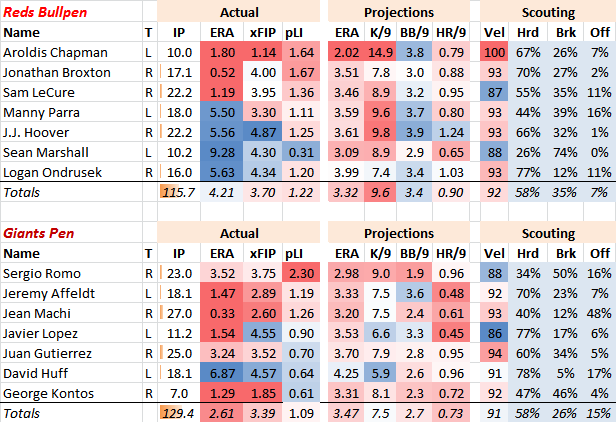 Sergio Romo has unquestionably been effective for a long time.  He's interesting for a righty, though, because he's sort of a soft-tossing breaking ball specialist.  There was a time when he was used like a ROOGY: far more appearances than innings pitched.  His days of striking out 10+ k/9 seem to be over, but he's inducing more ground balls than he used to.  The 31-year old's strategy appears to be about forcing the other team to put it into play.  He's hittable.  The rest of the pen, Huff excluded, has ranged from brilliant to solid.  Javier Lopez, however, who has long been a key lefty for years in their pen, has seen a massive drop in his strikeout rate (3.0 k/9 this year!).  He'a also actually walked one more batter than he's struck out.  He's a soft-tossing loogy, but at 36, he might be approaching his end.

C. Trent wrote the other day about how the Reds' pen has seemed to stabilize, finally, after finally getting everyone back.  Their ERA- and xFIP- have finally inched below   Jonathan Broxton hasn't had peripherals to match, but for whatever reason, opposing teams haven't been able to hit him this year.  He's getting some attention from both C-Dot and John Fay.  Hopefully, he (and Sam LeCure, for that matter) can continue the voodoo!

The Reds have some nice momentum coming into this series after rebounding from the Josh Collmenter debacle and posting a three-game winning streak.  I tend to think that momentum matters exactly until it doesn't, which could well be the first pitch. But it sure has been nice to see the Good Guys winning, even if it was against the team with the second-worst record in baseball.  The Giants are a much better squad, and Reds' pitching will have to keep their bats silent for the Reds to be in these games.  Fortunately, they get the Giants' #4 & #5 starters in the first two games.  Those are the games that they really need to win, because Madison Bumgarner is looming large in game 3.