TELL 'EM ALL TO GO TO HELL

Fighting perfection and the melted chocolate running down my chin.

Share All sharing options for: TELL 'EM ALL TO GO TO HELL

It's humid at 10 p.m. and my heart's trumming like the Wheel of Fortune. It's not a long walk -- at least it wouldn't have been 5 years ago -- and I'm relying on a Choco Taco and Japandroids to get me home.

I am wearing a blue blazer and a bad attitude in Silicon Valley. The National would be more honest, but this is no time to be honest. I have to make sure that the Choco Taco doesn't spill because this is my only blazer. My own ridiculousness is obvious, thank you very much, but it's the summer. This summer, like every summer, is the only summer. This summer I am 19 years old. This summer I am sweating through the nicest clothes I own. This summer I am listening to loud music, drinking bad beer, and dreaming about the Reds game tomorrow.

This summer is for big plans. In summers past that meant taking a little boat out and making it sing, or conquering the mountains, or kissing that pretty girl I worked with. Those summers are past, and instead I'm handing out business cards and making rehearsed jokes. But like every summer I'm sweating too much and afraid to make too many plans come October. Every summer might have been the summer, but this summer might actually be the summer.

For reference, here is a photograph from this summer in 2009, where I can be seen with a head of curls and a mouth of Good Humor: 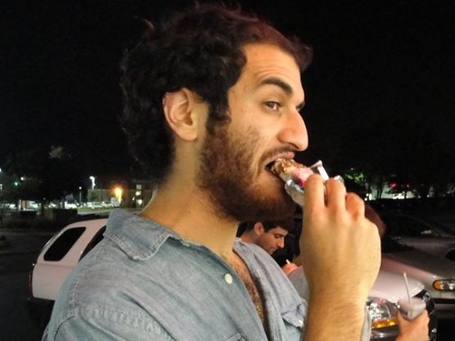 That was not the right summer, but it could hardly be called a failure. It'd be like calling baseball a sport of failure. Sure, Joey Votto only succeeds 40% of the time, but that means Joey Votto succeeds 40% of the time! Look at my success rate! If that's the bar we're looking at, I am Joey Votto 100% of the time. I didn't know about Japandroids yet back then (although, amusingly, I went to a venue the day before they performed. On a Saturday I could've seen Japandroids in a Philadelphia basement. Instead I watched some shit called Genghis Tron). I didn't know about Japandroids, but I knew what they were talking about. It's not yet July and I'm the king of the goddamned world. I'll throw beer bottles out of this parking garage, I'll make the prettiest girl laugh, I'll hit .300, I'll walk on water.

When they love you and they will
Tell them all, they'll love in my shadow
And if they try to slow you down
Tell them all to go to hell

Sports is, I think, the terrarium of life. I long for the wild fluctuations of emotion that I get from watching a game, and I've only recently realized that this feeling will from hereon only come from sports. You, reader, are not the first person to think that I maybe ought to take medication to control my dizzying highs and terrifying lows, but those highs and those lows are me in an intrinsic way. I could dye my hair blonde, become a scientist, and gain 100 pounds but those emotions would remind me of where I came from, where I'm going, and where I am on that track. My journalistic and writerly attempts were always a way to try and tap into that sickening thrill, since it's not like I can find it any other way living in the Silicon Valley near a parking garage bereft of beer bottles and alongside a pretty girl (albeit one often laughing). I can tear myself apart, or I can watch Johnny Cueto do the same to lineups. It's a pretty easy decision, for better or for worse.

Baseball is the summeriest of all sports, and not just because the whole winter is spent in giddy anticipation. Baseball promises everything and breaks your heart. Baseball is perfection. Some old white dude at some point said that cleanliness is next to Godliness, but I see Billy Hamilton's dirty jersey or Aroldis Chapman's filthy slider and I realize that, no, baseball is.

In any other sport, there is a certain amount of math to figure out how the game is going. "Ok," the football fan-cum-straw man says, "we only need a touchdown here, then hold 'em, then a quick touchdown and an onside kick..." Baseball doesn't care about your math or your clock, but instead invokes the Prophet Joshua (10:13): Baseball will freeze the Godforsaken sun in the sky until the offense had had avenged themselves upon their enemies. Is not this written in the book of Jasher?

All of the other sports are merely the idols of the lesser gods.

So the sun stays still in the sky and anything is possible. The Reds can come back; in the game, in the division, in the cosmic ordering of the universe. The Golem will wreak havoc, the pitchers will sling rocks, and the trumpets will sing "WE'RE ALL RAHR RAHR."

And if the sun fails us and goes down defeated (and if the Reds follow), I'll always have tomorrow's game and I'll always have next year. I will stand up defiant, I will conquer again. Another year uglier and another year of evidence of all the odds I'm facing, I can believe in the Reds and the promise of being 19 years old. This will be the summer we make our mark and take our patrimony as promised in the auguries of our forefathers. I'm as giddy about it as I am sweaty. Baseball is a belief system, and this time I believe that this is the year.

I won't be able to close my eyes until I see the sun rise again.