The Return of EDE & END 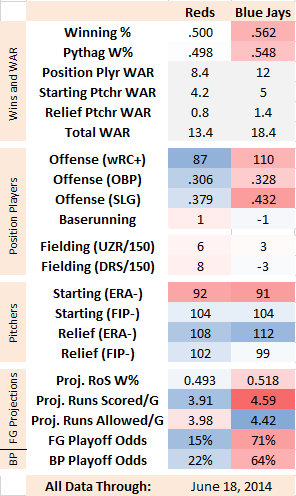 After winning both series in their NL Central road trip, the Reds return home to face the current leaders in the AL East, the Toronto Blue Jays.  The Blue Jays are a team that I've been expecting to see in contention for several years now.  They made major moves prior to the 2013 season to acquire Jose Reyes, Mark Buehrle, and R.A. Dickey, and have struck gold on several of their key hitters.  They really should have been an outstanding ballclub last year...but things didn't work out.  Their pitching fared poorly, and their offense was surprisingly bad.  They finished well below .500, and in last place within their division.

This year, however, they are clearly a force to be reckoned with.  They have one of the best offenses in the American League (#1 in wOBA, #3 (barely) by wRC+), and their pitching seems pretty solid.  In a year in which both Boston and New York are struggling, the Blue Jays have a good shot at the playoffs this year.  I think they're a pretty fun team, and I'll be rooting for them the rest of the way...as soon as they leave Cincinnati, at least.

The Reds, meanwhile, have played themselves into their best position since early April.  Losing yesterday's game (more or less) on a balk was disappointing.  But they are still keeping pace with the Brewers (who keep winning).  If the Reds can win this series against the Blue Jays, they'll be at least at .500 again, which is a good place to be with a series against the Cubs coming up.  Optimism is fun! 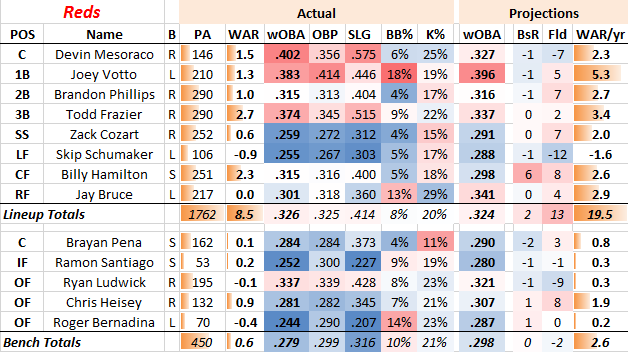 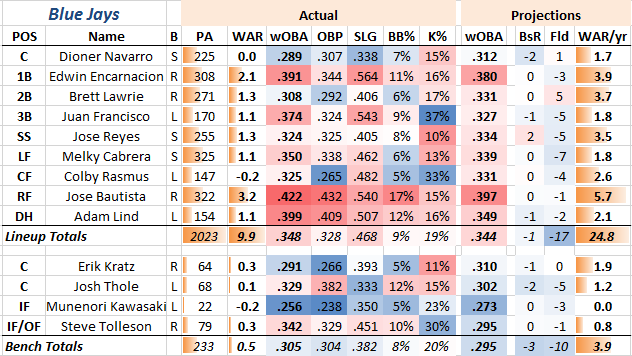 Gracious, this team has a lot of power.  We all know that Edwin Encarnacion has become a fantastic power threat.  Jose Bautista seems healthy and has become a mammoth on-base hitter to go with still-excellent power.  On top of that, the Jays are also getting an amazing performance from Juan Francisco (yes, that one!), who is finally enjoying some success at the major league level.  On top of that, Melky Cabrera and Adam Lind are having comeback years.  That's the good news.  They're getting a lot of excellence.

The bad news: Dioner Navarro (yes, that one!) has been tapped as the team's starting catcher, and hasn't hit.  It seems like they just can't figure out what to do with that position, and are carrying three catchers as a result.  Former top-prospect Brett Lawrie hasn't been good either, and Colby Rasmus looks like a completely one-dimensional player: power, but no patience, no contact, and bad defensive ratings to boot.

Baseball was more fun when R.A. Dickey was utterly dominant.  He hasn't been the pitcher the Jays hoped they were getting when they signed him, at least by results.  I more or less throw my hands up into the air when trying to interpret knuckleballers' peripherals, but I will note that Dickey's walk rate is up dramatically from where it has been the previous four seasons.  Also, R.A. Dickey is 39 years old.  Not that he was any good until his mid-30's...

Marcus Stroman is pretty exciting.  He was either the Jays' #1 or #2 prospect entering the season, depending on your preferred publication.  Stroman throws pretty hard, and nevertheless he has shown the same outstanding control in the big leauges that he consistently demonstrated in the minor leagues.  He hasn't been racking up the strikeouts like did in lower levels, but he is getting a lot of ground balls.  He looks like a really solid young pitcher, and it should be fun to see him to toe to toe with Cueto on Sunday. 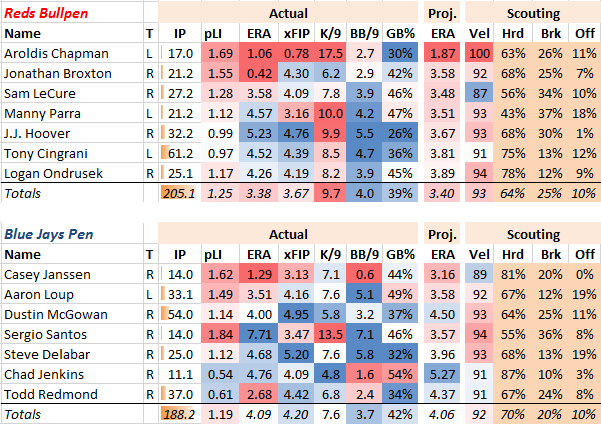 Casey Janssen somehow is somehow almost 33 years old, and his velocity is down several MPH over the last few years.  Nevertheless, he has shown surgical control, and has been very effective in the late innings.  Aaron Loup has also had some success as the lone lefty in the pen, but he's been wild this year, and looks like he's been lucky.  Former closer Sergio Santos also has gotten a lot of late inning work, but has been torched thanks to a 7.1 walk rate.  He's striking everyone out that he isn't walking, but it's not been pretty through the first 14 innings.

The Blue Jays look pretty tough.  They have a really good lineup.  Furthermore, my feeling is that some of their under-performers will pick it up in the second half, even as some of their surprises (like Francisco) cool down.  The Reds miss their top two starters in Buerhle and Hutchinson, and pretty clearly have the pitching match-up advantage in all three games.  If the Reds' pitching staff can contain their offense, the question then comes down to whether Reds' offense can continue to mount a credible threat.