The Pirates are the anti-Reds: great offense, lousy starting pitching.

Share All sharing options for: Series Preview: Reds at Pirates 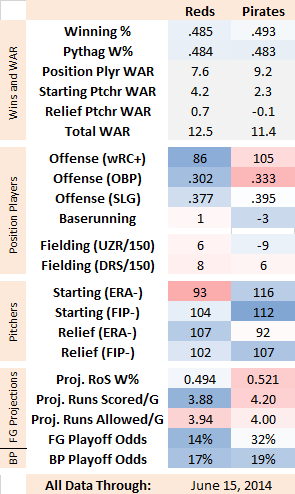 After a much-needed day off yesterday, the Reds face off with the Pirates in Pittsburgh in the second series of this road trip.  While we all knew that a sweep was too much to hope for in Milwaukee, the Reds nevertheless won the series and thus shaved a game off the Brewers' lead.  Now "just" 7 games behind the Brewers, the Reds turn their attention to the 3rd-place Pittsburgh Pirates.

The Pirates were forecasted by many to regress from their fairy-tale season last year, and they have.  They sit a game below 0.500, a consequence primarily of their struggling pitching staff. While their rotation was a strength last season, they have struggled this year to put together good outings.  Even more problematic, their top two starters, Francisco Liriano and Gerrit Cole, recently found themselves on the disabled list with a strained oblique and shoulder fatigue, respectively.

The good news for the Pirates is that their offense has been dynamite.  Their 105 wRC+ is the second-best in the league, and the arrival of Gregory Polanco might mean they could get even better.  The Reds' pitching staff could well have their hands full trying to contain the Pirates' bats.

Everyone talks about how gorgeous PNC Park is.  And if I can show my immigrated-to-Western-PA colors here, they're right.  It's also probably underrated as a pitcher's park.  This is not on the same level as PETCO in San Diego.  But the park features a deep outfield, especially in left field, that  substantially depresses power production.  The Pirates have made a study of how to best defend the copious left field, and have done interesting things with how they position their outfielders for at least a half-decade now to optimize their fielders.  For non-HR batted balls, the park plays pretty fair. 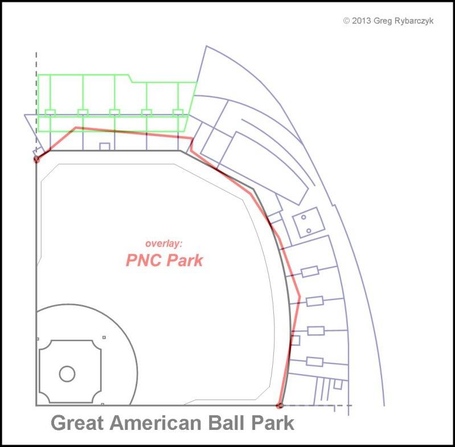 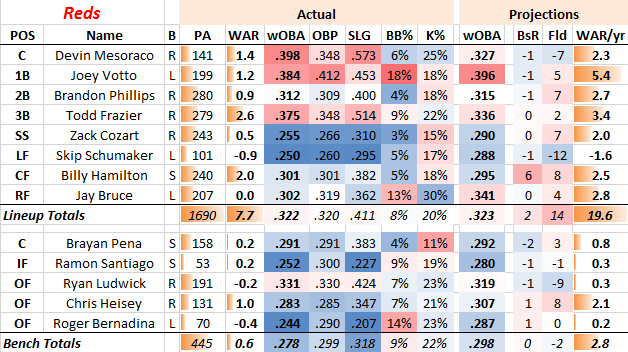 Thanks to his HUGE power display this weekend, Billy Hammerin' Hamilton has now pushed his wOBA up over .300 for the first time this season!  He's also posted +4 baserunning runs, and, according to UZR, has been almost a +10 run defender already this season.  I don't know if I quite believe those fielding numbers, but even if we say +5 runs so far (which seems reasonable to me), he's half-way to a 3-win season.  This is basically what I hoped Hamilton could do this year: a bit better than a replacment bat, plus fielding, and plus-plus baserunning that can get him into at least the vicinity of an average player.  I'm still not sure that leadoff is the best spot for him.  But he's unquestionably having a nice rookie season.  If he can get his batting average over 0.275 or so, we might start hearing talk of a rookie of the year award for him given the lack of other major rookie factors in the NL.  Those stolen base totals will get a lot of voters excited. 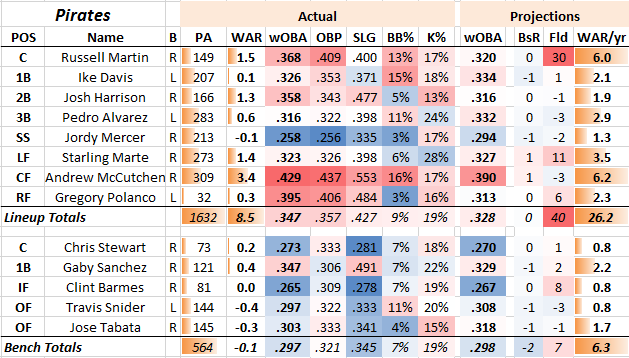 The last time we saw the Pirates, Andrew McCutcheon was struggling a little bit.  No longer.  Egads, he's been a monster this year.  He's been better, in fact, the he was last year when he won a well-deserved MVP.  The fact that he's struggled a bit early on just tells you how unreal he has been over the past month+.

That said, the guy I'm most interested to "see" (in quotes, 'cause I'm in the Pirates blackout zone on mlb.tv, so I don't get to see any of this!) in this lineup is Gregory Polanco.  The Pirates' top prospect entering the season according to Baseball America, Polanco forced his way onto the Pirates roster by basically torching AAA.  He hit .347/.405/.540, with 15 stolen bases to go with his power production.  The Pirates really had no choice but to promote him, despite not being able to sign him to a long-term extension a la Jonathan Singleton.  So far, he hasn't disappointed: he's been raking.  The projections are more skeptical.  But so far, so good, for the Pirates' young right-fielder.

Even Pride of Princeton High School Josh Harrison has hit well this year, and while still aggressive, is showing better discipline than in the past.  He's filling in quite well for the injured Neil Walker.  The only real weakness in their lineup, at least so far, has been Jordy Mercer, who is supposed to be a bat-first shortstop.  Clint Barmes, the glove-first option, has actually out-hit Mercer (slightly) on the season so far.  Mercer is still collecting most of the starts, however, given his history of being a decent(ish) stick.

Lastly...I gotta say, I like the Pirates' bench.  They worked a nice trade to bring in Ike Davis to platoon with Gaby Sanchez.  Snider and Tabata are probably not starter-material, but they give you a nice left/right combination of former top prospects that can be deployed to provide one of either (at least theoretical) power or on-base/speed skills.  Harrison is also really a bench guy, and is having a fantastic season as a versatile utility guy.  It's a nice model that I'd like to see the Reds try to follow.

I'm infatuated with Edinson Volquez's pitching line this year.  Volquez has always gotten plenty of ground balls, and usually has gotten plenty of strikeouts. His problem throughout his career is that he usually has no idea where the ball is going.  His career walk rate is 4.6 bb/9, and he posted several seasons with walk rates over 5 batters per nine innings.  The highlight (or lowlight?) was 2012 with the Padres, when he led the league in walks with 105 in 182.7 innings.  This year, he's suddenly throwing the ball over the plate.  Unfortunately, at the same time, his strikeout rate has slipped.  Still, if you're the Pirates, it's hard to be too upset over the results.  Volquez is not the problem in this rotation.

Brandon Cumpton and Jeff Locke have pitched only a handful of outings this year, having spent more time in AAA than in the majors.  They are primarily here because Francisco Liriano and Gerrit Cole are both on the disabled list right now, and the Pirates are having to dig into their depth.  Cumpton throws fairly hard, but hasn't gotten strikeouts to go with that velocity in either the big leagues or the minors.  Therefore, his stats make him look like a bit like a control-first soft-tosser.

I always think of Jeff Locke as that sort of pitcher as well, though he tosses from the left side.  The difference is that while he's shown great control this year, last season he walked 4.55 men per nine innings.  My hunch, without watching him a lot, was that he was forced to nibble so much with big league hitters that he had to walk guys.  Otherwise, they'd be hitting the ball over the fence.  So far, though, he seems to have adopted a different strategy, and it has worked through 20 innings. 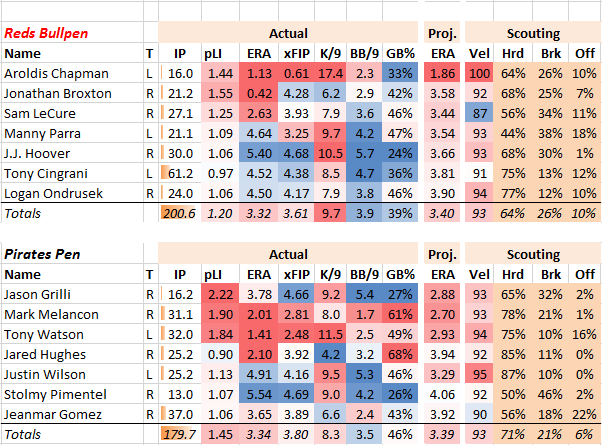 So, Tony Cingrani is now in the pen.  I think he'll do quite well there.  Probably very well.  I'm just hopeful that he doesn't get pigeon-holed there.  Hopefully, either the Reds will shoot back into contention...or Cingrani will find himself back in the rotation by the end of the year.  Otherwise, I'll get grumpy about the situation.

Also a word on Aroldis Chapman: Wow.  Let's not take him for granted.  This has been nothing short of amazing.

The Pirates' calling card the last few years has been that of a team with a great bullpen.  This year, it hasn't looked quite as good.  They're getting the typical amazing performances from setup guys Mark Melancon and Tony Watson.  Jason Grilli, however, has been wild and not particularly effective, and their middle relief has been equally shaky.

Go Reds!  If they can win this series, they climb back into third place in the Central.  The NL Central's big players have pretty easy draws this week: the Brewers get a series against the Diamondbacks, while the Cardinals are playing the Mets.  That means that whoever wins this series likely will do little better than hold ground against the division leaders.  But the team that loses would then slip back once again in the standings.  Let's hope that the Reds are the team that comes out on top!