Reds have opportunity to gain ground against Brew Crew

Share All sharing options for: Series Preview: Reds at Brewers 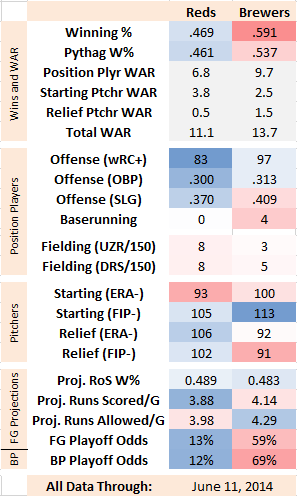 Having salvaged the Dodgers series to work a split, the Reds fly to Milwaukee to take on the NL Central-leading Brewers.  The Brew Crew have been atop the NL Central for most of the season.  That came as quite a surprise, because they were ranked by most preseason forecasts (both algorithmic as well as pundit-based) as something like the 3rd- or 4th-best team in the Central, often somewhere in the vicinity of 0.500.

There's something about the Brewers that I've always liked.  Maybe it's their unabashed worship of beer.  Or that they're the originator of the now-ubiquitous sausage race.  I like that they have repeatedly gone all-in to make the playoffs.  And I like that when their window was closing, they made some good mid-season trades that resulted in good pick-ups (e.g. Jean Segura).  They just seem, from the outside, like a smart, well-run organization.

This year, they've built their success on two things: solid (if overachieving) starting pitching, a surprisingly strong relief corps, and a solid offense that has plenty of power.  Even after incorporating their numbers into current projections, FanGraphs still doesn't rank them as a better team than the Reds moving forward.  But they have a lot of wins in the bank.  As a result, they have a 60-70% shot at making the playoffs at this point, compared the Reds' more remote 12-13% chance.

I'm happy for them.  But I also will be rooting for the Reds to crush their dreams and mount an amazing comeback...starting tonight!

Miller Park is interesting.  Throughout its history, it has played as something very close to a neutral park, shifting back and forth between slightly favoring pitchers and hitters.  But at the same time, it's always been a good place to hit home runs.  The fences match up pretty well with what we see at Great American Ballpark, with the exception being that is a bit deeper down both the right- and left-field lines.  Other events aren't severely depressed; singles are a bit more rare (0.98 park factor), but that's about it.  It's a place where you can dream on the homer late in the game, but we shouldn't expect to see the park play much of a factor in the series. 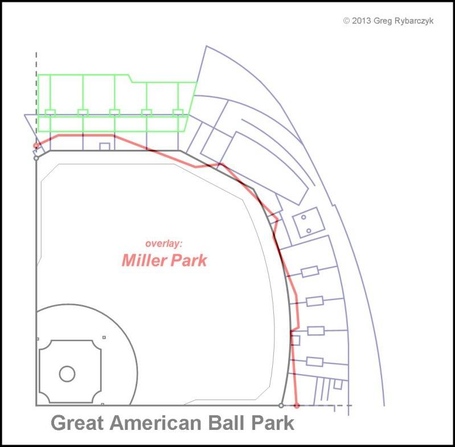 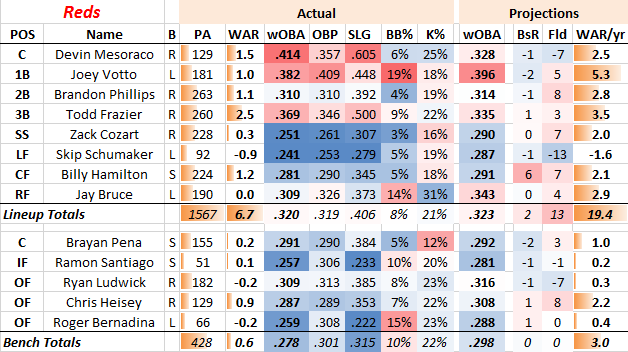 I wanted to write that, for the first time this season, the Reds are finally at full strength in their starting lineup.  But with Phillips leaving yesterday's game with a finger injury, we might see him sit out part or all of this upcoming series.  And as much as I groan about how the Cincinnati media overrates BP, he still plays good defense and is in spitting distance of a league-average bat at a defensively-demanding position.  Get well soon, Brandon!

Still, it's wonderful to see Joey Votto and Jay Bruce together in the same lineup once again.  It'd be even more exciting if Bruce could start stringing together some good games.  Given the lack of production the Reds have gotten from many of their other positions, it would really help to have Bruce go on a tear. 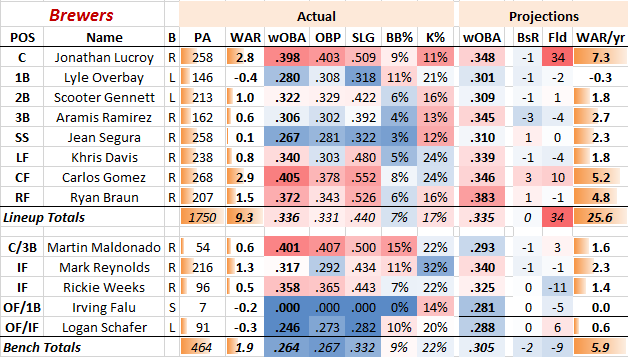 So, you know that amazing performance that the Reds have gotten from Devin Mesoraco in 129 PA's this season?  The Brewers have mostly gotten that from Jonathan Lucroy in a full season of work this year.  He hasn't shown Devin's power, but he's been getting on base at a Votto-like clip that makes up for it.  Add to that his superior defensive skills (he's well-known to be a terrific pitch framer), and you have a guy who should be contending for the NL MVP, non-Tulowitzki category.  I've heard him called Yadier-light.  But over the past calendar year, Lucroy has been the better performer.

Some of Lucroy's best competition in the MVP race is his center fielder, Carlos Gomez.  I think Gomez is fascinating.  I find it almost impossible to believe that he's only in his age-28 season, because it seems like he's been around forever.  He was the key acquisition in the Twins' deal that sent Johan Santana to the Mets before the 2008 season.  Despite playing in the majors as a 22-year old, he was largely considered a flop in the aftermath of that trade.  He earned a strong reputation as a great defensive center fielder, but he didn't hit a lick.  The Brewers acquired him in exchange for J.J. Hardy, a deal that many (myself probably included) panned.  Hardy was often-injured, but he was a quality offensive shortstop coming off a bad season, while Carlos seemed like the definitive no-hit defensive center fielder.  Then, something happened in the second half of 2012: Gomez started to hit for power.  From July through September, Gomez slugged 15 home runs (previous season high was 8).  He continued to show that power through last all of last season, and FanGraphs estimated his season value at 7.6 fWAR (though that might be a bit inflated by a +24 run fielding rating...though b-ref gave him +38 runs in the field and 8.9 WAR, so....).  He's one of the best players in baseball.

I guess the moral of the story is that you can never really give up on toolsy, athletic, former top prospects...at least not until they clear their late 20's.  They can rebound from terrible numbers to produce outstanding performances almost overnight.  See also: Phillips, Brandon (though to a lesser degree).

Final thought on this team: I wonder how much longer they will hang with Lyle Overbay in their first base platoon, given the power production they're getting from Mark Reynolds?

Welcome back Mat Latos!  After struggling all year with knee and arm injuries, Mat Latos is finally scheduled (almost officially) to replace Tony Cingrani in the pitching rotation.  He'll face the always-solid Yovani Gallardo, who has remade himself into a ground ball pitcher over the past two seasons.  I don't know what we'll see from Latos, but all accounts are that he's fresh, eager, and healthy.

Mike Leake is scheduled to face Marco Estrada.  I've been a big fan of Estrada for a while due to his excellent k/bb ratios.  He has historically put up some excellent numbers for the Brewers, despite being a fairly extreme fly ball pitcher.  This year, he's just been killed by the home run.  He has an 18% HR/FB ratio to go with his 37% ground ball rate, and has allowed 2.28 HR/9.  Ouch.  There's talk that he might lose his job in the rotation as early as this weekend.  I'm not sure who the heir-apparent would be, although the Brewers did just promote Mike Fiers in the past week.

Finally, a word on Tony Cingrani.  I actually don't hate that the Reds moved him from the rotation in favor of Alfredo Simon.  I'm not sure if they will put him in the bullpen or back in AAA.  Either could be advantageous.  In AAA, he might be able to continue work on his secondary offerings, and to regain some confidence.  In the bullpen, at least in the short term, he'd be able to conserve his arm and innings a bit...and, hopefully, he'd be able to help the Reds.  His fastball-heavy pitching repertoire lends itself very well to the bullpen, even if ultimately I want him to be a starter.

If I was the Reds, I'd be keen to trade Simon if anyone was willing to buy him.  I'm not sure that there would be many good offers, however.  His peripherals don't match his performance, and there's the whole civil lawsuit lingering in the background as well.  But if someone will cough up something for him, I'd cash in now and move Cingrani back to the rotation. 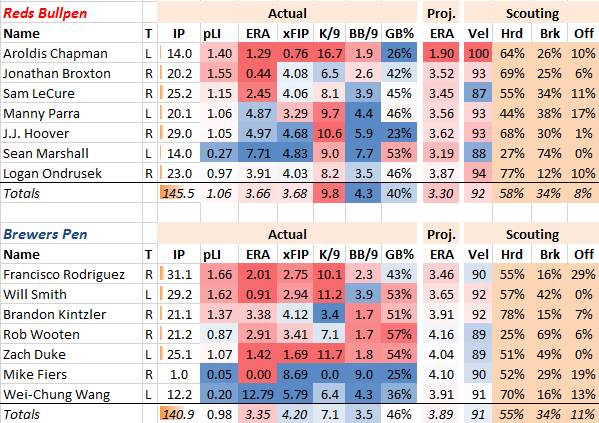 Ok, so if, at the start of the season, I told you one of these pens would have five pitchers with ERAs under 3.4, including an excellent closer, a brilliant left-handed setup man, and depth into the middle innings, which team would you have expected: the Aroldis Chapman-fronted Reds, or the Francisco Rodriguez-fronted Brewers?  K-Rod is pitching out of his mind his season, but there's nothing in this season's numbers that says he can't keep doing this.  I didn't realize it, but last season, his k/bb ratio was almost the same as it is this year.  The only difference is that he's getting more ground balls.

Going into their game against the Mets last night (as I wrote this), the Brewers had a 7.5-game lead on the Reds.  Now, one can't really hope for a sweep.  But can you imagine?  That'd suddenly put the Reds 4.5 games back.  With the Cardinals still hovering around 0.500, the Reds have an opportunity here.  I like the Reds pitching match-ups in all three games.  If the offense can build on what it did the last two games of the Dodger series, this could be an exciting weekend for the Reds.  Here's to optimism! Go Reds!