The power-hitting Rockies come to Great American Ballpark for a weekend series.

Share All sharing options for: Series Preview: Rockies at Reds 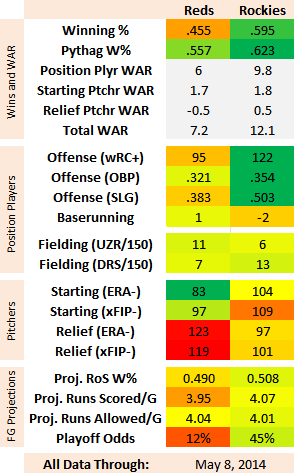 After a close pair of games in Boston, the Reds return home to welcome the Rockies to Great American Ballpark.  The Rockies are off to an outstanding start, and are currently a game back from the equally-surprising San Francisco Giants.  The Rockies have been an offensive powerhouse, and it's not just Coors' Field. They've combined for a 122 wRC+, which is easily the best in the major leagues.  And remember, that's a park-adjusted statistic!  As we'll see, they've done so thanks to surprisingly good performances from many of their position players (especially their outfield), plus a player who is reminding everyone that when healthy, he's among the top two or three players in baseball.

The Rockies' pitching has just been ok.  Their starters have generally been solid and have thrown lots of innings.  After park adjustments, they've posted just as many fWAR as Reds starters.  Their bullpen has similarly been quite good, even if they're not among baseball's elite.  They project to be a roughly 0.500 team the rest of the way, so most would agree that they've overachieved thus far.  But that over-achievement has been driven by terrific performances, rather than just luck with sequencing or something like that.

For the Reds, the story remains much the same.  A touch below-average offense, excellent fielding, good starting pitching, and a terrible bullpen.  With luck, Aroldis Chapman will be activated tonight, though as I'm writing this there hasn't been word of this.  And in the end, there's only so much a closer can do for a club. 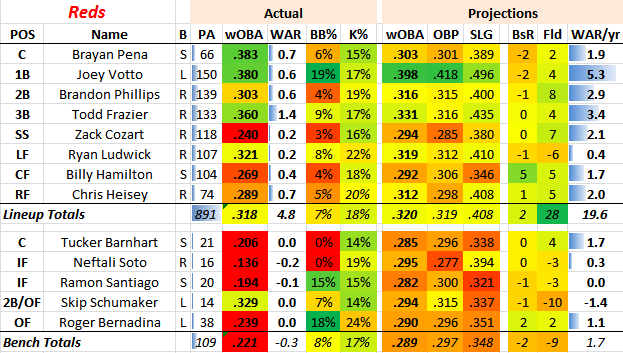 This week, I opted to move the walk and strikeout rate columns from projections to actual 2014 totals.  As I wrote yesterday, Todd Frazier has seen the biggest improvement in his strikeout rate this year of any player on this team (it's down to 17% from his 22% preseason projection).  That's happily accompanied improved overall performance, which, along with great fielding, has Todd currently ranked with the best WAR on the team (just edging Devin Mesoraco).  Joey Votto's slump has him well behind Todd, but I don't think there's much question that Votto will probably be the best hitter on this team moving forward.

Aside from Votto, Frazier, and Ryan Ludwick, the rest of the Reds offense is extremely aggressive.  All other current starters (not counting Mesoraco and Bruce) have walk rates of 6% of less.  It does raise the question of whether the Reds seek out that kind of player, teach that philosophy, or if it's just a happenstance that stems from losing two of their better hitters.  I'm not addicted to walks, but I like having men on base... by whatever means is necessary.. 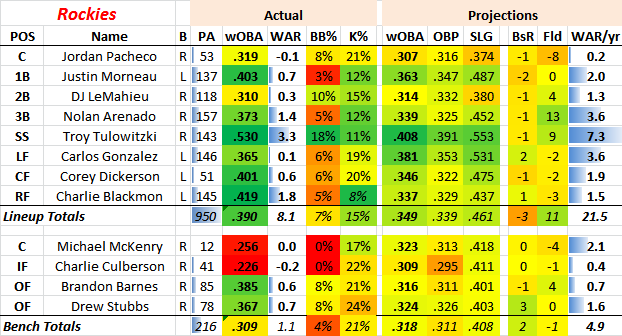 So this is what happens when everything clicks!  The Rockies are without their starting catcher, but Jordan Pacheco is holding up his end of the bargain--on offense, at least.  DJ LeMahieu also hasn't  really gotten in on the fun.  But everyone else on the team has been smashing the ball.

Charlie Blackmon has been getting a lot of attention because of how unexpected his apparent-breakout has been this year.  But it's hard to overstate how amazing Troy Tulowitzki has been.  We're living in a age in baseball in which shortstops really don't hit anymore.  We don't have Barry Larkin, Alex Rodriguez, a young Derek Jeter, and Nomar Garciaparra playing up the middle anymore.  Instead, most teams have someone kind of like Zack Cozart--a player with some offensive skills, but mostly one who earns his value on defense.  And yet, here is Troy Tulowitzki, being amazing.  The guy is a plus-fielding shortstop and and outstanding hitter.  The only reason we haven't seen this sort of thing more often from him is that he has been so frequently injured.  He's a long-time man-crush of mine, and it's neat to see him leading the league in WAR once again.  I just hope the Reds can shut him down.

Also, it's nice to see Drew Stubbs having a good season.  He's platooning with Corey Dickerson in center field, and the two are combining for phenomenal performance (1.2 WAR already).  Unfortunately, with the Reds not starting a lefty, we might not see much of him in this series.

Jhoulys Chacin is only 26, but it seems like he's been in the Rockies' rotation forever.  He's dropped down to their #5 starter at this point.  His velocity is down considerably, and one wonders if the injuries he's suffered have sapped his stuff too much to be effective.

Jordan Lyles, on the other hand, appears to have taken a step forward this season.  He's reportedly done so through a change in pitch selection in different counts, and the effect has been that he's creating extremely low strikeout rates that are balanced by outstanding ground ball and walk rates.

The Sunday starter hasn't yet been declared on MLB's website, but I think it's Juan Nicasio's turn.  He's been solid this year, though he's never posted the kinds of strikeout rates in the majors that he did in the minors.  He's basically average across the board: average velocity, average strikeout, walk, and ground ball rates, and average ERA (once you account for Coor's).

As I write this, it hasn't yet been announced when Aroldis Chapman is due back.  When he returns, the complexion of this bullpen changes a lot.  We'll have Broxton (who isn't great, but is decent enough), LeCure, Parra, and Marshall all available for mid-to-late innings at that point, allowing J.J. Hoover to hopefully have time to find himself in lower-leverage innings.  I'm looking forward to that happening, once Chapman's ready to return.

This has been a really good bullpen thus far.  There are some chinks in the armor, though.  In particular, LaTroy Hawkins and Rex Brothers aren't posting good peripherals right now, which hopefully (for the Reds' sake) could portend a comeback win or two.  Pretty much everyone else has been very solid, however.

It's interesting to see both Matt Belisle and Nick Masset pitching for this pen.  Between those two and Drew Stubbs, facing the Rockies is a small Reds player reunion.

As Joel Luckhaupt pointed out today on twitter, the Rockies have huge home/road offensive splits this season.  So by that logic, it's better to face them at home than on the road!  I'm not sure how much I buy into the meaning of that: you'd expect a substantial home/road split because of Coors' park effect, but the data indicate that they've been so ridiculously good at home thus far that they're capable of continuing to hit as an above-average offense on the road.  Hopefully, Cueto can set a good tone with them tonight, and some of that can carry over into the weekend with Simon and Bailey.  Go Reds!