Where we perceive a chain of events, the Angel of History sees one single catastrophe which keeps piling wreckage upon wreckage and hurls it in front of his feet...

Share All sharing options for: Red Reposter: Walter Benjamin was a Reds fan

Jason Linden has a neat little look at Joey Votto's future ISO that will probably be the talking point of the day.

Aroldis Chapman pitched at Louisville yesterday, giving up four hits, an HBP, and a WP for 5 runs in 2/3 of an inning. Michael Grant of the LCJ was there to watch, or at least cover his eyes.

Mike Petraglia of Boston's WEEI gets glurgy, with an article on "How Cincinnati Instilled Roots of Leadership in Jonny Gomes." Gomes has a bunch of great lines in it, saying that " I'm definitely proud that I can say we put Cincinnati baseball back on the map" and the like. What a great guy.

The rained-out Cubs/Reds game is gonna be played on July 8 as part of a doubleheader. So put that on your calendar.

Sam LeCure found the #63 in the Fenway scoreboad, and Jim Day is on it! 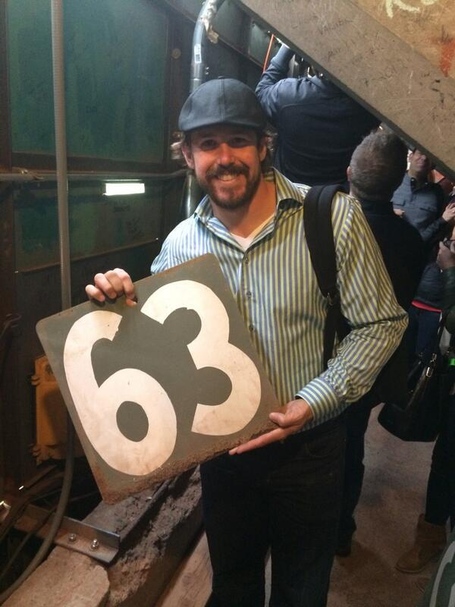 Doesn't Sammy have some bodacious girlfriend? How does she let him dress like that?

Bummed that Bernadina is the choice to come back after Bruce's injury? Doug Dirt looks at the other choices: there is one healthy non-pitcher on the 40-man, and he's batting .213 in AA. The Reds have no depth and are talking to nobody.

Matt Synder -- not the Matt Snider I went to college with who is working on a wild game reserve in Tanzania, but the CBS baseball writer -- is pretty stoked about Cueto's start. He should be, but still, nice to see some national love for Johnye Cuest. Also, auto-playing video on that link, so watch out!

The Pensacola blog has a nice little writeup on Beau Amaral. I didn't realize that Richie spent a whopping four years at AA before cracking the bigs at age 29. Rich was a bit under-respected as a high OBP guy in the late 1980s coming up, and Beau is following the same track with a .277/.330/.355 line so far. Beau can run (70 SB / 16 CS) and is well-respected in the OF, so if he can add middle infield to his repertoire he could crack a big-league roster in a Freel role. I doubt he does it with the Reds org (both Freel and Amaral didn't crack the bigs for the team that drafted 'em), but I hope he does it.

A foul ball split two dudes in the first row somehow, and James Dator has a neato .gif:

You Cincinnati folks may find this interesting: a ceramic model of Over-the-Rhine.

You English speakers may find this interesting: former pronunciation errors that have become common speech.

The sort of thing I find interesting: Richmond is looking for a new place for its AA baseball team, and they're looking at Shockoe Bottom. The thing is, Shockoe Bottom is the historic beating heart of the Virginia slave trade, and various city organizations are trying to turn the area into a historic district, a monument, and a memorial for slaves. What do you do with a historic part of town when the history isn't too savory? NPR investigates -- and I certainly have my opinions -- but it's all an interesting read. I think that I would feel differently for a major-league team bringing in 30k/night and the revenue streams that would entail, but for 6k? It doesn't seem like a good use of space. On the other hand, a smaller stadium may be able to fit within a historic district if done well (and Richmond's old town does have a lot of well-done urban planning). Be curious to hear what you think.

In an otherwise not-terribly-well-written article by Cord Jefferson on "Football as black servitude," he has an interesting quote:

Football fans are primarily white and relatively wealthy, earning $55,000 annually on average. 40 percent are over the age of 50. "Football has demographics that baseball would kill for," said one CNN analyst, who, were he more direct, would have said, "White guys with hefty disposable incomes watch football."

What's baseball's demographics, then? Anyone know? Would baseball really kill to have to deal with the commercialness of football? Seems like there's plenty of money of baseball as it is without having to be as pandering-for-every-cent that football has become.

If you read this far, I have a question for you. Do you like my not-very-baseball-related links at the bottom or should I knock them off?

I feel like that since there is so little out there written on the Reds, I may as well get some other conversational topics in there. But if you think that I'm getting too much on a soapbox or too irrelevant, please let me know.