Comfortably Numb: Why no love for Cueto?

Share All sharing options for: Comfortably Numb: Why no love for Cueto?

Johnny Cueto is pitching well. His start to the 2014 season has been REALLY good, like historically good. For some reason, outlets such as FanGraphs don't think Cueto is worth writing about. In fact, the folks over at FanGraphs have managed only one post mentioning Johnny since the season started, and even that was a fantasy baseball post projecting a decline in strikeouts. 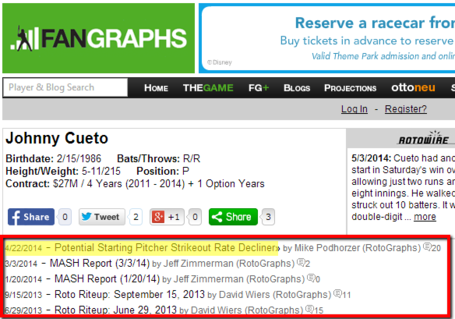 After 7 starts, Cueto leads all of baseball in ERA, WHIP, opponent AVG, and complete games. He is averaging nearly 8 innings per start and has pitched at least 7 innings every outing this season. In 55 innings he racked up 60 strike-outs.

Some perspective... According to Fay:

Likewise, Cueto's start to the season is the best of any pitcher in at least 5 years. From Rant Sports:

Cueto is now the only starter in the last five years to start the season with seven starts of at least seven innings while surrendering two earned runs or less.

With all of this in mind, it was a bit surprising when Cueto was not named NL Pitcher of the Month. Instead, Jose Fernandez won that title. But it shouldn't have surprised any of us. Cueto's entire career has been marked by snub after snub. Consider, Cueto has never been an All-Star. Since the start of 2010 he has a better ERA than Cliff Lee, Jered Weaver, Felix Hernandez, Justin Verlander, Adam Wainwright, David Price and just about any other pitcher you can name. Yet, Cueto has no awards or All-Star selections to show for it.

Make no mistake, Jose Fernandez had a great month of April, but he wasn't better than Cueto. The problem is coverage. FanGraphs for instance has posted no less than 3 articles about Fernandez since the season started. All the other statistics become irrelevant because Fernandez is winning the most important battle with a 3-to-1 advantage.