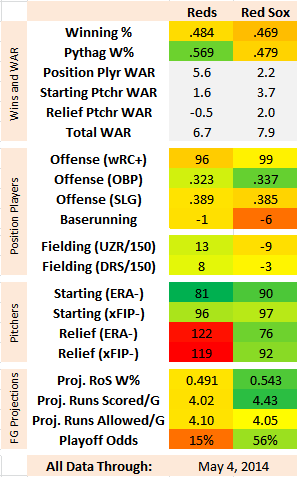 After an excellent series against the NL Central-leading Milwaukee Brewers, the Reds head to Fenway Park.  Unfortunately, that success is largely negated, at least in my mind, but the news that Jay Bruce will miss a monthafter undergoing surgery for a torn meniscus.  Bruce is a tough player to replace, and the Reds will have their work cut out for them if they are to stay in the hunt.

Nevertheless, there's nothing else for them to do except to hunker down and play ball.  They face a struggling Red Sox team.  Given that they are the defending World Champions, the Red Sox had a rough April.  They sit below .500 and in a tie for third place with the Tampa Bay Rays (entering action Monday night).  Fortunately for them, no one else in the AL East had a particularly good April either, and they sit just two games behind the first place Yankees.  The Red Sox have, to my eyes, surprisingly poor offensive numbers given their lineup.  They also have not shown themselves to be a good fielding team thus far, and have poor baserunning numbers.  They have gotten good starting pitching (though not quite as good as the Reds), and their bullpen has been very good.

With their offense and pitching, this just feels to me like a better team than they've shown thus.  And their projection agrees.  According to FanGraphs, they still have a 56% chance at a playoff berth.  That's in part due to the fact that no one has run away with the title in the AL East.  But it's also because they project to be a well above-average team the rest of the way, based on their team composition.

Fenway Park is probably the park in which one's handedness as a batter makes the biggest difference in how it plays.  Right-handers--or opposite-field hitting lefties, like Joey Votto--can send towering fly balls over the Green Monster, or slam line drives off of it for singles or doubles.  Left-handed pull hitters face a deep right field where fly balls that would be home runs in many parks turn into outs.  If you love asymmetric parks, Fenway is bound to be among favorites. 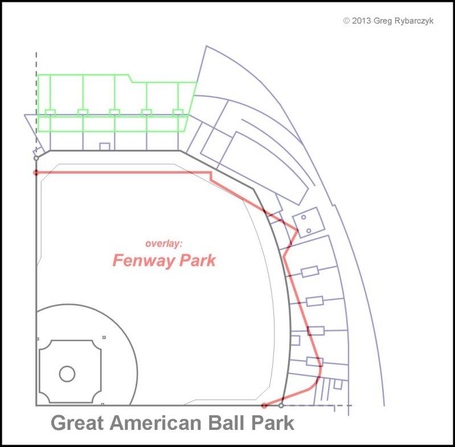 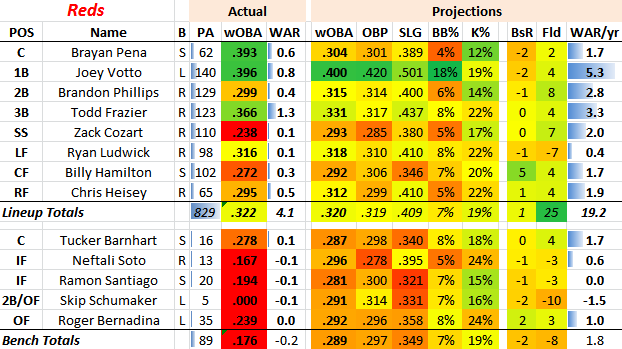 Before Bruce's injury, there seemed like a pretty easy solution for the question of who to DH: make Ludwick the DH, and play Heisey in left field.  Now, things are a lot more up in the air.  I know word is that all three of Heisey, Schumaker, and Bernadina will see more playing time in right field, but if I was Bryan Price I would give Heisey most of Bruce's starts.  And for the DH?  Still Ludwick, I guess, but now we're starting Schumaker or Bernadina both games.

Or, if Billy Hamilton isn't yet ready to swing the bat, it means all three reserve OF's are starting this series.  Between Schumaker and Bernadina, I prefer Bernadina.  The reason is entirely fielding.  Schumaker might not actually be a -10 defender, but his numbers at his primary positions are not good.  My feeling is that he's more of a corner outfielder at this point in his career, rather than a 2B/CF guy.

On a positive note, it sure has been fun to see Brayan Pena continue to hit in Devin Mesoraco's absence.  I miss Devin, and I dread the expectations that will be placed on him when he returns--especially if the Reds struggle while Bruce is out.  But Pena has been far better than I dared hope when the Reds signed him. 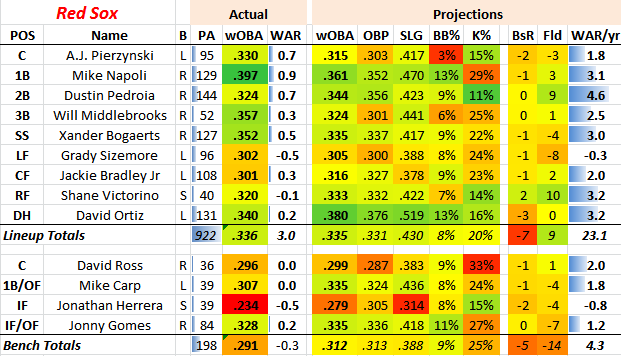 Bogaerts, in particular, is off to a terrific start.  He's not showing a ton of power thus far (though he projects for more), but he's getting on base at a nice clip thanks to an excellent walk rate and, perhaps, a bit of BABIP inflation.  Bradley has frankly had the same offensive profile thus far, except that his BABIP is about 50 points lower.  Bradley is a plus defensive player, and looks likely to profile as a pretty classic leadoff type: lowish power, good on base skills, and some speed (though without big stolen base totals).

The other newcomer to the lineup is comeback-attempter Grady Sizemore.  For a day or so this offseason, it sounded as though Sizemore was likely to become a Cincinnati Red.  I was pretty excited about this, as it seemed like a great gamble.  He ended up getting a much bigger contract from the Red Sox...but for what it's worth, his early returns are not special.  He's been acceptable as a hitter, except that he's playing left field, not center field.  And if the defensive metrics are to believed (and they're not this early), he's been below average over there.  He's platooning with ex-Red Jonny Gomes.  But given that Tony Cingrani is on the DL, the Reds seem unlikely to see a lot of Gomes in this series.

The Reds drew a good spot in the Red Sox' rotation.  Felix Doubront seemed to have some hype when I saw him in the playoffs.  But there's not much here to indicate that he's an effective big league starter, at least not yet.  His projections are weak, and he's been hammered thus far based on obth his ERA and xFIP (low k's, high bb's).  If Homer Bailey can build upon his last outing, the Reds have a good chance to win that game.  The match-up between Leake and Peavy looks pretty even to my eye.  Peavy is not the pitcher he once was before his arm troubles, and despite the 2.87 ERA, his xFIP so far has been terrible.

Partch is back in the pen while Cingrani is on the DL these two weeks.  He throws harder than any other active Reds reliever.  But he doesn't know where it's going.  So far this season, he's walked as many as he has struck out (6.23 bb/9 and k/9).  I'm not sure that he's likely to improve all that much.

The Sox have a pretty elite trio in Uehara, Tazawa, and Andrew Miller.  Miller is one pitcher that I'd lost track of, but the failed starting pitcher prospect has been really good as a left-handed specialist over the last few years with the Red Sox.

Edward Mujica, on the other hand, might be on his way out.  His projections already weren't strong, but he and Craig Breslow have been hammered thus far.

The Reds were dealt a pretty tough blow when they lost Jay Bruce for the month.  But they're hitting the weak point in the Red Sox rotation with this short visit to Fenway.  I'm hopeful that some good things can happen!