Can the Reds get on track against the struggling Arizona Diamondbacks?

Share All sharing options for: Series Preview: Reds at Diamondbacks 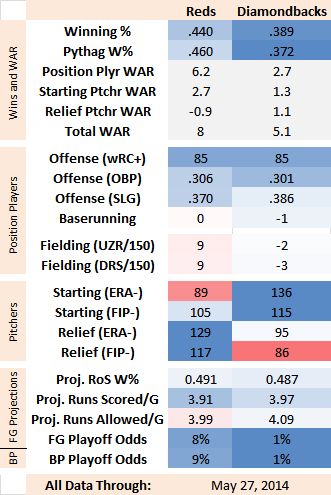 So.  At the time that I write this (prior to end of the last Dodgers game), the Reds are in the midst of a 4-game losing streak.  They're 7.5 games behind the Brewers.  And thanks to a modest surge by the Pirates, the Reds now sit in 4th place in the NL Central.  Finally, the Reds' playoff odds, according to both FanGraphs and Baseball Prospectus, have dropped below 10% for the first time this season.  It's a tough time.  The offense has been very poor, and the bullpen has been even worse.  Despite the strong performances by the starting pitching, the Reds have been a sub-0.500 team, in terms of both real wins and PythagenPat record.

Is there hope?  Sure.  Latos and Votto could return, Bruce could catch fire, Frazier & Mesoraco & Cueto and the rest could keep on keepin' on, and the Reds could go on a tear.  But they're at the point that they will need to go on a heck of a run to get back into contention.

John Fay and C. Trent Rosecrans are already starting to talk about the Reds' potential trade chips.  Cueto's at the top of the list, of course.  He's cheap for his value, and there's not a team in baseball that wouldn't love to have him.  None of us are privvy to the Reds' true financial situation, but they are facing what could be a major escalation in payroll next year.  First-time eligible arbitration players Todd Frazier, Devin Mesoraco, and Zack Cozart are in line for big raises.  And other salaries are going up, while very little salary is scheduled to go off the books.  It could be that the Reds are set up to absorb that hike in payroll, which could allow them to field much the same team next year as they did this year (hopefully in good health!).  But it just seems like a lot of money.  I'm not sure what the coming few months will bring, but if the Reds don't rebound, I think we could be looking at some significant roster changes.  Of course, maybe that's what this team needs...

The good news, if there is some, is that the Reds are going up against one of the most disappointing teams in baseball.  Entering the season, the Diamondbacks were viewed by most as something near a .500 club.  Unfortunately, a combination of injuries (four of their pitchers, including two of their starters, were hit by the Tommy John bug this spring) and ineffectiveness has them vying with the Cubs for the worst record in baseball.

The Reds return to my old haunts.  I spent 7 years in Phoenix (hence the AZ in my username), and for a lot of that I lived only about 10 minutes away from the ballpark in South Phoenix.  As a result, I've probably seen more games there than any park other than Riverfront.  It's a really nice place to take in a game.  I never thought I'd like indoor baseball.  But when the heat is blazing outside, it was an incredibly comfortable, pleasant place to kick back and enjoy a ballgame.  It's the place where my oldest "saw" her first ballgame as a two-month old (the night of Carlos Quintin's debut, when he hit his first major league home run), and where I got to watch live games in the first World Baseball Classic.  I also got to see a 2007 playoff game there (Cubs v. Dbacks), which was the only playoff game I've ever attended in person (go ahead, make fun of me).  I have pretty great memories of that ballpark.

Phoenix is at pretty high altitude, and the air is very dry.  As a result, the ball tends to fly.  The park was built relatively large as a result, but it still allows a good number of home runs, and plenty of additional base hits.  Think of it as a lower-key version of Coor's Field.  It's nice and symmetric, though, and has a pool in the outfield! 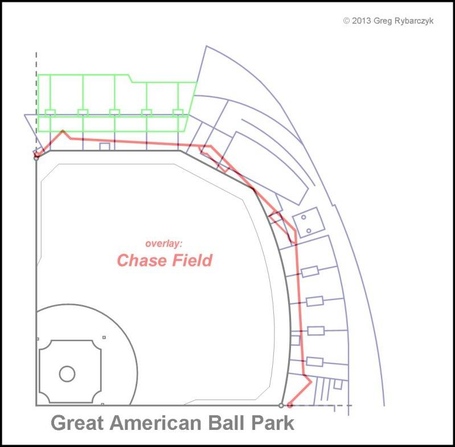 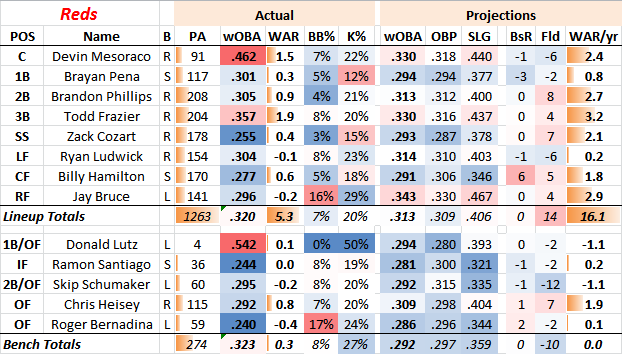 I'm happy to see Donald Lutz on the big league team, if only because I think we've basically seen the highlights of what Brayan Pena will provide this year.  I like Pena as a reserve catcher, but not as an everyday first baseman.  I'm not sure if Lutz will be much better than Pena--I think it's amusing that he has the exact same projected wOBA--but there's a chance, right?  Price seems sort of waffle-y on using Lutz, but I think that's mostly due to being a little overly-enamored with Pena.  Hopefully Lutz will see some PA's in this series.

Of the players that have struggled thus far, the guy who obviously can and (health permitting) will turn it around is Bruce.  I haven't had the chance to watch him since his first game back, but I'm hopeful that his knee is ok.  I'm a bit puzzled by Price's reluctance to use him as a pinch hitter on his off-day. 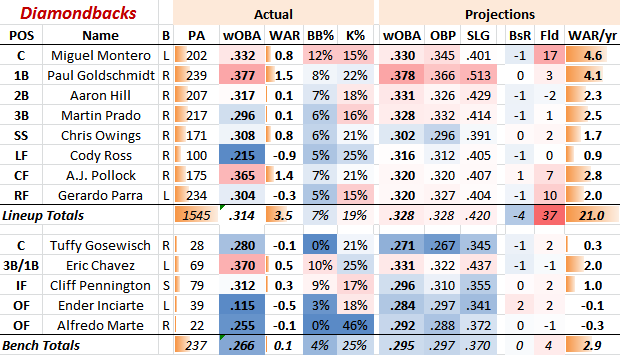 I was honestly expecting worse, given the team's hitting.  Cody Ross has been terrible this year--much worse than Zack Cozart!  But aside from that, this team doesn't look much worse than the Reds do.  I guess that's the problem, though: the Reds have been pretty bad as well.  But Miguel Montero is having a decent bounce-back year, and Paul Goldschmidt has been quality (though not as good as last year, naturally).  Behind Goldschmidt, their second-best hitter has been A.J. Pollock.  His strikeout rates are up, but so are all of the rest of his numbers, including his power...and his BABIP.  I'm not sure how real this is.

Chris Owings was the D-Backs' #2-or-3ish prospect entering the season.  I don't know much about him, but he posted very low walk rates and fairly high strikeout rates in the high minors before beating out former Red Didi Gregorius for the starting shortstop job this spring.  He's got a little pop, can run a bit, and has good fielding projections (though not as good as Gregorius).

New today: starter WAR is a 50/50 average of standard FanGraphs FIP-based WAR and RA/9-WAR, which is based on actual runs allowed.  This gives more credit to players like Cueto and Leake and Simon, who have outperformed their peripherals.  Some of that's luck, some of that's the fielding behind them, but some of that might be skill.

The highlight of this series for me will be the faceoff between Mike Leake and Bronson Arroyo on Friday night.  Hopefully this will still happen: Arroyo left his last game with soreness in his elbow.  Word is that he'll still make his start.  Finger's crossed!

I'm also keen to see both Brandon McCarthy and Wade Miley.  McCarthy is still trying to get his career back on track after being hit in the head with a pitch in 2012.  His peripherals suggest that he's doing that.  He's posted his signature miniscule walk rate (1.6 bb/9), while having the best strikeout rate of his career (7.7 k/9).  Miley, on the other hand, seems to be one of those guys who goes unnoticed at the national level.  Nevertheless, he has posted back to back quality seasons, and his peripheral numbers are right where they were last year: not a ton of strikeouts, but not many walks, and a good ground ball rate. 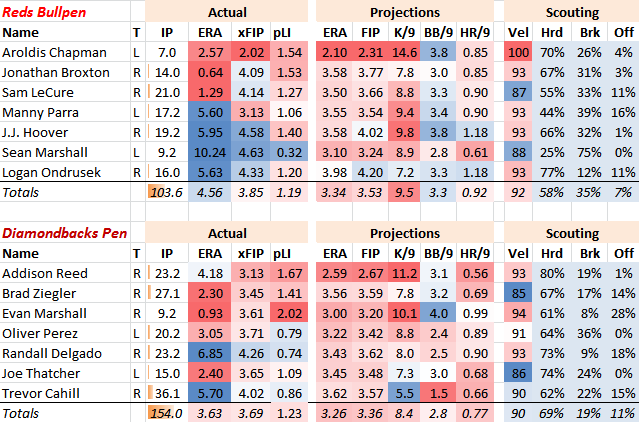 An effective bullpen is GM Kevin Towers' trademark.  Mostly, this has been an an effective squad.  Addison Reed has had some struggles, but they seem entirely driven by an 18% HR/FB ratio.  When he's not serving up homers, he's striking everyone out--he's walked almost no one this year.  The other key guys, including omg-is-that-Oliver-Perez?, have been quite good so far.

Randall Delgado and Trevor Cahill both have taken a step back and out of the rotation and into the pen this year.  It's easy to see why, given their ERA's.   But Delgado, in particular, is just 24 years old, and has some pedigree behind him.  I'm sort of baffled that the Diamondbacks aren't putting him out there to see what he can do, given where they are in the standings.  His velocity is there, and his strikeout rate has been good...he just hasn't had a clue where the plate is so far this year.  Last year, he posted a 1.78 bb/9, and this year it is at 5.7 bb/9.  If I'm running the team, he starts over Josh Collmenter.

It's sort of doomy and gloomy in Reds country these days.  But the Reds would seem to have the advantage in the first three games of this series, and that means that this is a series where we can root for some wins.  I'm planning to just sit back and enjoy some baseball.