This Week in JPEGs

Jay tags in, Joey tags out. Also, Billy has a cannon and is probably a machine. And also also, an announcement.

Share All sharing options for: This Week in JPEGs

Another week, another JPEGs, and another opportunity for me to be grammatically incorrect. Last week's winner is titled, BP Punches Ian Kennedy's Ticket to Pranksville, also Home Run. It was a close vote, as it just edged out my attempt at a 20th century continental expressionist/existentialist throw into being illustrating the hardly utterable brilliance of Johnny Cueto. Then he threw a bad game. Stupid art and causality.

This week, I only have two JPEGs for your consumption. More on that later.

Billy Has a Cannon, is Probably a Machine

In case you missed it, Billy Hamilton made a gorgeous throw to get Jimmy Rollins on an attempted tag up on a fly ball. We all knew his range was incredible, given his serious wheels, but there were questions about how his arm would play in the outfield. Turns out, kid has a cannon. He's probably a machine. 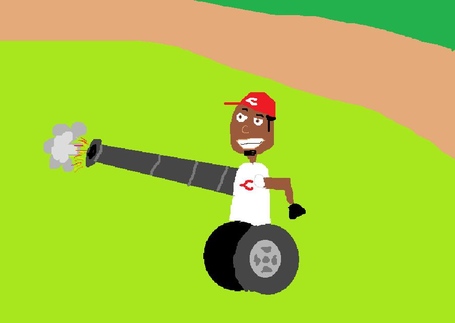 Jay Tags in, Joey Tags out

It has been a rough year for the Reds, what with all the injuries. A few weeks ago, Jay Bruce went on the DL needing knee surgery. Soon after that, Joey Votto was sidelined with a quad issue. It was wait-and-see for Joey for a while, but then on Wednesday the Reds put him on the DL while activating Jay. So I drew something about them as a wrestling tag team.

It's the legendary tag team The Red Scare!, featuring The Red Baron and Jay "The Body" Bruce! They have four times defended their Tag Team Championship belts, most recently against the dastardly duo of Brauny and Rude Gomez.

We pick up the action here just after the stupid Freditor Bird bashed The Red Baron over the knee with a steel chair. Somehow, the ref didn't see it! As The Baron crawls to the edge of the ring to tag his partner, The Body, Freditor Bird starts squawking at the crowd and saying dumb things. He's always squawking and saying dumb things. Don't worry though, wrestling fans! The Red Baron successfully gets the tag and The Body launches into the ring, elbows Freditor in the face, and sends him headlong into the turnbuckle! With Freditor Bird sprawled out on the mat, The Body climbs to the top rope, signals to the crowd that he is about to execute his signature move, the Home Run Crush, and lands it square on Freditor Bird's stupid dumb face! ONE! TWO!! THREE!!! And The Red Scare are still World Tag Team Champions of the World!! 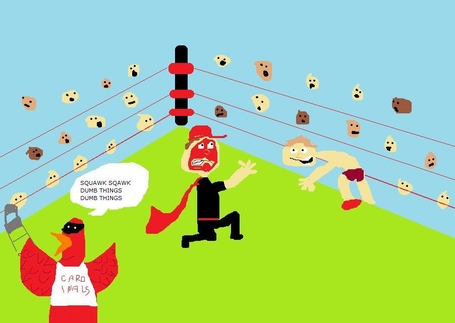 So yeah, about there being only two JPEGs this week. I don't want to get into a whole political thing here, but I think you the readers deserve to know what is going on. Earlier this week, RRHQ announced some cut backs. One of the departments hardest hit is the art department, where TWiJPEGs has been put together every week during the season for the last year or so. We had to lay off two researchers, my personal assistant, and the milk boy. According to BK, Red Reporter's grant from the National Endowment for the Humanities was not renewed, supposedly due to congressional meddling that slashed the NEH budget. But between you and me, I think BK just kinda hates me right now because when I was giving out the traditional high fives at last month's quarterly earnings meeting, he got up on a chair so he could reach* and then when we tried to high five he fell off the chair and into a mop bucket and everyone laughed at him. I didn't even know we had a grant from NEH. Frankly, it sounds made up.

So with all that, I'm afraid TWiJPEGs will likely not be as weekly as it used to be. I'd like to think I could keep this up all the same in lieu of the changes, but we all know better. I'll put these together when I can. I hope the irregularity will make them unexpected and all the better. But I think we all know my best work is probably behind me. I mean, this stuff is already pretty derivative of itself.

*Really? A BK short joke? This is just lazy writing is what it is.