The Reds face off with the division-rival Cardinals just as they seem to be heating up.

Share All sharing options for: Series Preview: Cardinals at Reds 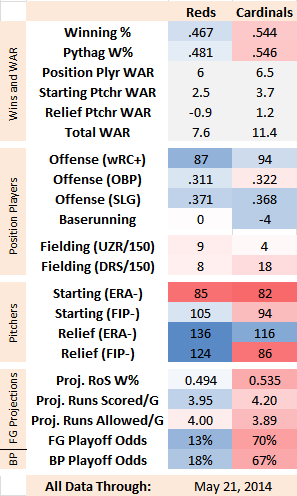 Having won the first series in their toughest 3-series stretch of the season, the Reds return home to welcome the Cardinals for a weekend series.  Despite the winning Nationals series, the three losses of the 3-3 road trip finally drove the Reds' run differential into the negatives for the first time this season.  As such, their Pythagorean Winning percentage is now a close match for their projected rest-of-season winning percentage.  Granted, they've just weathered two weeks without Jay Bruce, and a week without Joey Votto.  But the Reds' offense is showing no signs of rebound at this point.  The starting pitching, as a whole, still looks pretty strong, despite Johnny Cueto's sudden return to near-mortality this week.  But altogether, it's getting harder to make the argument that this is a team that will contend this year.

The caveat, of course, is the injury load.  And if Mat Latos returns in early June, and if Joey Votto comes back healthy and strong, and if the Reds don't suffer a major additional injury...then maybe we'll still see them go on that tear we've been hoping to see.  They'll unquestionably need to do that if they're to have any hope of getting back into this race.

The Cardinals, for their part, were the unanimous picks as the division favorites this season.  Nevertheless, they've had struggles of their own, and it wasn't until recently that they started inching decisively above 0.500.  Their offense has been much worse than expected, and their bullpen has struggled.  But their fielding numbers look strong, and their pitching has been impressive--and is arguably getting healthier.  Despite Milwaukee's amazing start, the Brewers might be starting to struggle, just as the Cardinals seem to be picking up steam.  Those two teams are now only separated by 2.5 games in the standings. 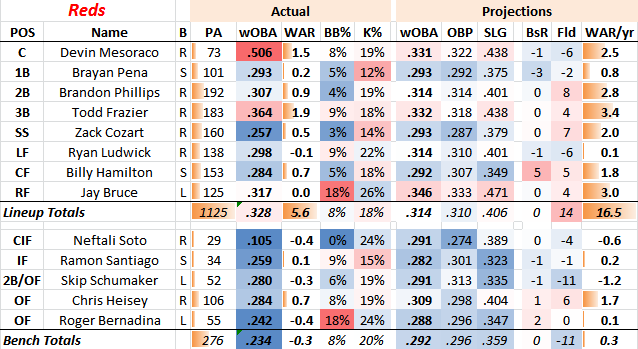 Brayan Pena has, somewhat surprisingly, been cast as an offensive weapon this year.  That isn't really supported by his past work, which is borne out by his projection.  And now, as (more or less) the team's current starting first baseman against right-handed pitchers, Pena's numbers have slipped all the way back down to where he was projected to hit for the season.  Unfortunately, the other major option, Neftali Soto, hasn't done a thing since arriving in the big leagues...not that he was particularly well-served by sitting on the bench for all of April.  Get well soon, Joey!

Also, don't look now, but Chris Heisey's wOBA is creeping up toward Ludwick's.  I'm not sure how much Ludwick's quad injury was hampering his performance before it forced him out of the lineup.  But given the fielding boost the Reds get with Heisey, I don't really mind if he has to sit out a bit longer. 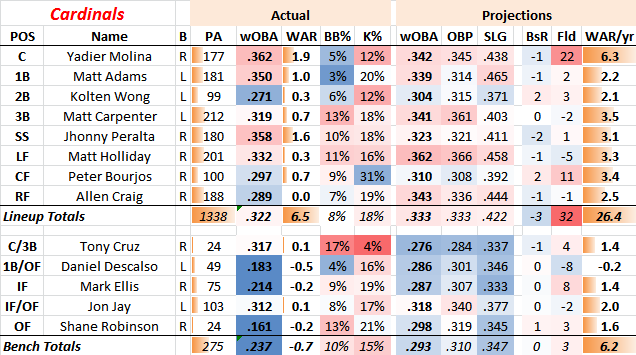 I think it's probably because I'd built him up so much in my head, but of all of the Cardinals' disappointments so far, I've been most surprised by Matt Carpenter's struggles this season.  He's still walking a ton (walk rate is actually up 3% this year), and still making good contact, but his power has taken a huge hit from where it has been the last few years.  I guess you can't hit 55 doubles every year.  Nevertheless, I still tend to think that he's going to recover--and even what he's done has been a touch better than league average.

Even worse has been Allen Craig.  Thom's favorite player due to his historical brilliance with runners in scoring position, Craig has shown a big up-tick in his ground ball rate this year (59% vs. 46% career).  That might be part of why his BABIP is down, along with a mild 2% uptick in his strikeout rate.

The other spot of note might be second base.  Top prospect Kolten Wong was demoted to AAA last month due to ineffectiveness, but Mark Ellis was even worse as his replacement.  Wong is now back, and the Cardinals seem to be back to their preseason platoon of those two players.

Despite all of their struggles, the Cardinals have still managed out-score the Reds by 15 runs on the season.  That's not a big advantage.  But I think they're due for a significant rebound over the rest of the season.

Shelby Miller's results look good, but everything about his numbers indicates that whatever ailed him during the playoffs last season hasn't really changed.  His strikeouts are way down from last year (7 k/9), and he's been wild as all heck (5+ bb/9).  The Reds haven't made a habit of driving players back toward their peripherals this year, but it would sure be nice to see them deliver against MIller.

Jaime Garcia just came off his first start in over a year after he recovered from a series of arm troubles.  It's hard to know what to make of him after just one start, but I do think it's interesting that his velocity (91 mph) was at it's highest level since 2010.  Granted, it's just one start.  But if I were a Cardinals fan, I'd be encouraged.  That's especially true because Garcia has demonstrated that he can be very effective with lower velocity: from 2012-2013 he posted a ~3.35 xFIP across 176 innings while throwing 89 mph.

And Adam Wainwright continues to be Adam Wainwright.  His ground ball rate is down a bit so far, but he still has been getting an excellent strikeout rate and has walked almost no one.  That's a tough draw for Mike Leake.  But frankly, Leake has dealt with that kind of thing all season long, and has acquitted himself quite well. 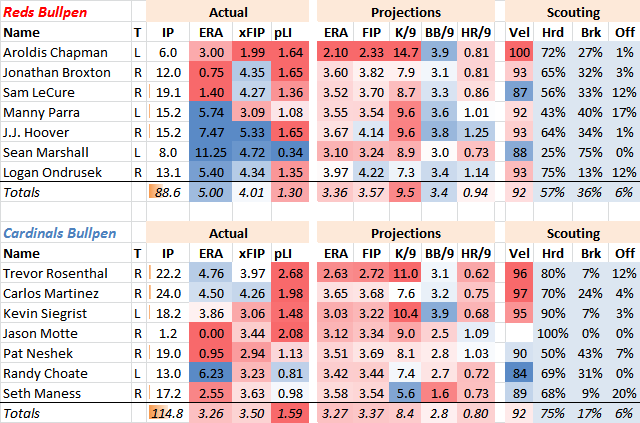 The back end of the Cardinals bullpen has been surprisingly shaky this season.  Trevor Rosenthal has been wild as heck, and Carlos Martinez has not been striking guys out like one might expect.  Fortunately for them, the rest of their pen (aside from maybe Randy Choate) has been quite solid.  On top of that, Jason Motte just returned, and through two appearances has been excellent.  If Rosenthal continues to struggle, we might just see Motte reprise his role at the back of this bullpen.