Off Day Reposter, and Thoughts of a Flameout

We've got some neat-o fielding metrics, a Cincinnati Anthology, and me being weird for a few hundred words.

Share All sharing options for: Off Day Reposter, and Thoughts of a Flameout

It's weirdly quiet in Reds land. If you want to talk about Bruce being back for the Cardinals' series (and the DL'ing of Joey Votto), then Wick has the thread for you. I don't have anything really intelligent to add, other than that I hope that Bruce is really ready to play and not just being macho.

Speaking of, there's a Cardinals series this weekend. Gulp.

Also on the injury front, Ryan Ludwick was held out with a wonky kneecap. Sheldon's got some quotes on how Price believed that the two-day rest period (ghosts of Dusty) would help him out. His.246/.326/.339 is marginally better than Heisey or Bernadina, but goodness gracious this OF is awful. Also in the notebook is a mention that Eric Davis will be the Reds' representative to the Draft, where they'll pick 19th (best ever: Roger Clemens) and 29th (best ever: George Brett). Lee Seras, a scout, will join Davis in New York.

Thanks to jch, this is a fascinating look on the difference between a RBI single and a double play by SI's Ben Reiter. What's that difference? The Mets' coach telling his shortstop to move one step to the right. Probably my favorite baseball read for a while.

But that may be because I haven't read Joel Ostergaard yet. Pete Beatty interviews him about his new book, The Devil's Snake Curve, and they have an excerpt too. Check out the interview, but the excerpt -- with the full story of "Take Me Out to the Ballgame," is great.

Grant Brisbee is not impressed with Million Dollar Arm.

The athleticism and aptitude involved must be otherworldly. Singh doing as well as he did, and so quickly, is a movie I want to see. How he actually adjusts to life -- actual bus-jockeying life -- in the low minors, that's a movie I'm desperate to see. That’s the movie baseball nerds would have lapped up. Instead, the movie is told from Hamm’s perspective for whatever reason, so it becomes about him saving his agency and the Indian players feeling good that they didn't fail him. We’re supposed to relate to Hamm.

He's got a point. Seeing a fish out of water thrash the heck out of the water and kill everything in the water would be cool. Seeing Jon Hamm smile is what the internet is for.

Audrey Hepburn's Beauty Tips are not relevant, but damned hilarious.

This may or may not be your thing, but Zan McQuade published a Cincinnati Anthology, which is basically just a celebration of the city. It might be a bit twee, but it looks pretty awesome. And Sam LeCure contributed. So check out the interview and make your own decision on whether to buy it or not.

Apropos of nothing, the Baltimore Black Sox jerseys are AWESOME: 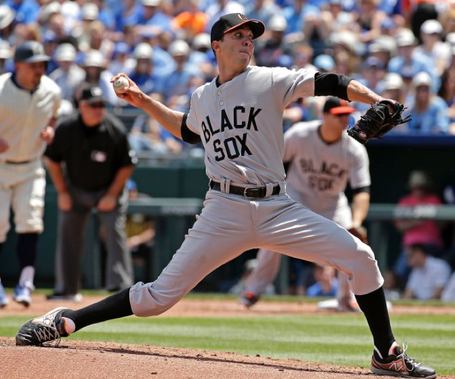 Chris Gruler looks happy. He's got a pretty girl, a great smile, and he looks more like an adult than the men-child athletic freaks that actually make it to the pros. Good for him.

I'm heading back to the US tomorrow. I hope to actually stay there this time, and maybe even be in the same bed for more than 8 months at a time. These are big and exciting life decisions for me.

That said, life decisions come with a price. The whole plan of coming out here was to finally Be a Journalist, but it turns out that I don't have what it takes. Or maybe the time wasn't right, or maybe it's just the economy. Point is that yeah, I had a few good stories and made a few good memories even though I realized that I wasn't cut out for it.

Draft week is coming up. And sure, you can focus on the Mike Leakes, but that's only because they are focusable. 2007 gave the Reds Devin Mesoraco, Todd Frazier, and Zack Cozart, and it also gave a brief glimpse of hope into the lives of Brandon Menchaca and Matt Klinker. And there's always Milton Loo.

I'm not saying this for pity. Just to say that I think I realize the sudden shock of not being good enough that must've hit these other young and youngish men along life's way. You probably do too, unless you're one of those rare and beautiful wonders who is able to do what they love. The rest of us are just, well, people looking for a bit of a purpose.

Life after baseball could be rough, I imagine. It could also be freeing, since "what I/you/we wanted to do" can be a fluid concept and can also be some very wrong things. There's a great Seamus Haney poem (well actually there's a lot of them, but bear with me) called "Digging" about, well, digging. Haney supposes to dig like his fathers with his pen, or maybe to dig through their stories with his pen. Verbs are weird like that.

Also weird like that is baseball. It's been a part of my life (and maybe your life) for a while despite never actually being a part of it in the job/work sense.  We just kind of revolve around baseball, giving it its lifeforce with which to pay millions of dollars and create dreams. We're little electrons.

Electrons are cool. I could dig being an electron. Our brief fires keep the general fire of things burning. It's not exactly a front-page and a spread for the Times, but maybe I'll learn to take it.

So I'm sticking around here, don't get me wrong, and I hope to be part of the light in these parts. It involves figuring out some stuff, but the fun thing about Red Reporter is that we're all co-digging. Maybe one of us is the young Haney offering milk.