This Week in JPEGs - Atlanta is a dumb place

Atlanta is a dumb AND stupid place.

Share All sharing options for: This Week in JPEGs - Atlanta is a dumb place

Last week's JPEG o' the Week is titled, The Dread Pirate McCutchen. It just edged the competition, probably through nefarious or dastardly means. That guy, huh?

This week, the Reds went to Atlanta and got swept the heck right out of town. It was pretty dumb.

Sunday afternoon's game in Atlanta was really something. Johnny Cueto and Julio Teheran put on dueling master classes in GETTING SHIT DONE. The pair dueled for the first eight innings, combining to strike out 16 while surrendering only six hits. These kinds of pitchers duels are my absolute favorite games. It's a thing of beauty when two pitchers are the top of their respective games and every at-bat is charged with win-or-lose drama.

The game was scoreless into the 10th inning when J.J. Hoover came in to pitch. He sat down the first two batters in short order because he's nasty out there, but then Jason Heyward singled up the middle. BuhJupton smacked his first pitch up the middle right at Hoover. A man with proportionally lengthed arms would have snagged it easily, but the Hoov has little bitty T-Rex arms and the ball bounded off his glove. Manny Parra then came in to face Freddie Freeman and that was the ball game. 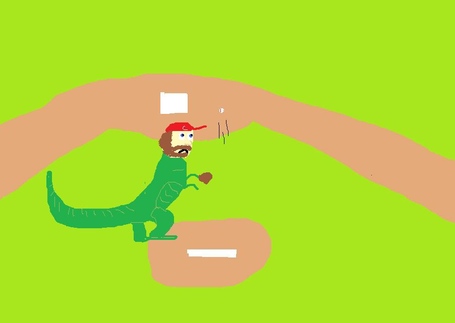 Every year the Reds road trip to Atlanta, and every year Braves' fans irritate the metaphorical heck right out of me. They do that stupid Tomahawk Chop at damn near everything, which is irritating. The overt racist caricaturing is just icing on top. Barves' fans are dumb. Atlanta is dumb. 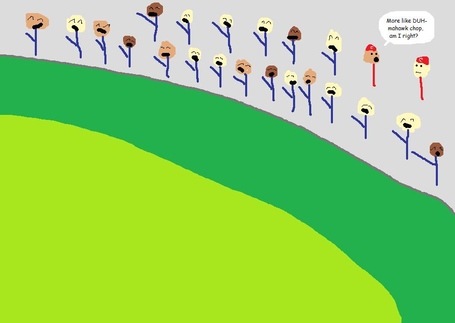 Brayan Peña has been outstanding in his first month as a Red. Not only has he been hitting like an animal (146 OPS+), but he is, by all accounts, a totally radical and bodacious dudemeister. For those who are uniNERTSiated, the whole NERTS thing originated last season when he was with the Tigers. He hit his first two home runs as a Red this week, so I drew a picture. 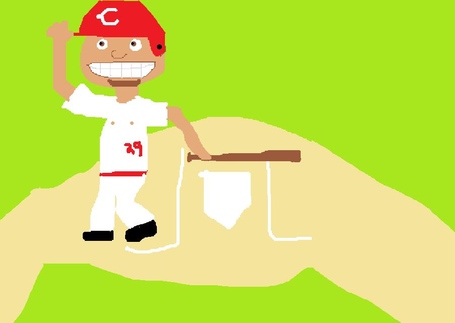