With Votto Out, Who's on First?

Share All sharing options for: With Votto Out, Who's on First?

As of yet we don't know the severity of Joey Votto's knee injury.  Ken Rosenthal mentioned that his source indicates a DL trip is likely, and C. Trent is reporting that Price said the Reds will not play short handed.  So, all signs are pointing to the Reds being without their best hitter for some time.  As of now, Brayan Pena and Neftali Soto will cover first base duties, but the Reds do have some options if and when Votto hits the disabled list.

This is probably the most likely scenario.  Donald Lutz is currently crushing the ball in AA to the tune of a 1.098 OPS in Pensacola, has plenty of experience at 1B, and is currently on the 40-man roster.  The Knockwurst spent time with the big league club last season, but was used more as a bench bat, getting only 59 plate appearances in a nearly two-month span.  The Reds could try and play the hot hand and see if Lutz could keep it up with everyday playing time, or at the very least try and make a platoon with Soto work.

Brayan Pena has played a grand total of 9.2 innings at 1B in the major leagues, and 24 games in the minors.  That's not exactly an extensive run, but if Nerts has proven anything in his short tenure with the Reds, it's that he's a team player.  Having Nerts at first would likely be a downgrade defensively, but he's hit well so far, and catcher is one of the only positions where the Reds have any depth right now.

Hand over the reins to Neftali Soto

This may be the most simple option, but probably isn't the best idea for the Reds.  Neftali Soto has played most of his minor league games at 1B, and by all accounts he can handle the defensive duties, but unfortunately he hasn't struck the ball with any authority since 2011 in the Carolina League.  In two full seasons at AAA Louisville, Soto has OPS'd .713 and .727.

Give Ruben Gotay or Chris Nelson a shot

These two are currently not on the 40-man roster, so this would require someone getting DFA'd or Joey ending up on the 60-day DL.  Both Chris Nelson and Ruben Gotay can play 3B, and Todd Frazier can play 1B, so It's feasible.   But there's a pretty good chance that these two are who they are - that is, not major league regulars.

Grahamophone brought Allan Dykstra to our attention back in February in his rather wordy post on Roberto Petagine.  Dykstra is 27 and owns a career .406 OBP in 6 minor league seasons.

Lance Berkman is only 38, and his career line at GABP bananas.  I bet he can still get on base at a decent clip, and it's probably better than letting Soto play everyday. 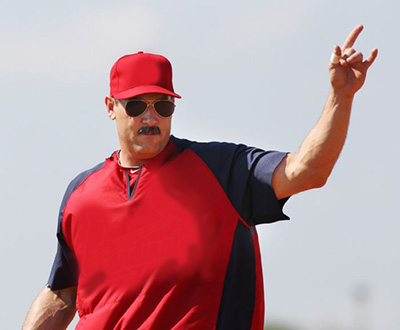