The Phillies have long been a tough draw for the Reds. But the Phillies are getting old, and there doesn't appear to be a lot left in the tank.

Share All sharing options for: Series Preview: Reds vs. Phillies

Edit: This article was written before the bad news about Joey Votto came to light. Votto is unquestionably the best player on the team, and losing him for any period of time--especially given that it is a knee problem once again--spells a lot of doom and gloom for the Reds' season...not to mention this series. I'm still reeling from the news, and I don't think I can edit this article in any kind of intelligent way in light of this. So, I'm not even going to try. Get well soon, Joey! -j 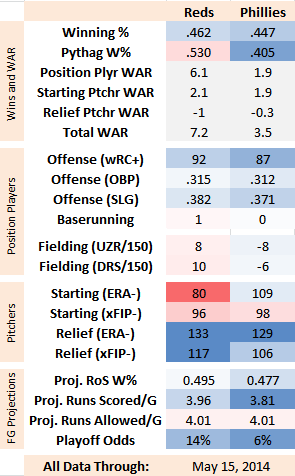 Following a disappointing series against the Padres, the Reds fly to Philadelphia tonight to take on the Phillies.  This Phillies team is interesting because, at least on the surface, it appears to be a prime example of what can happen to a team as it ages.  We all remember the dominant Phillies ballclubs that won their division every year from 2007-2011.  And most dramatically, we remember the team that swept the Reds out of the playoffs in 2010 on the arms of Roy Halladay, Cole Hamels, and Cliff Lee.

This is not that club.  They still have many of the same key pieces from those days past, and in many cases those players are still productive.  But most are no longer stars, and their surrounding cast isn't strong enough to get this team into contention.  They are currently in the middle of a 3-game losing streak, and a 3-7 stretch over their last 10 games.  They are in last place in their division, 4.5 games behind the Braves.

As a team, the Phillies have struggled even more severely than the Reds to score runs.  On top of that, they haven't been fielding well, resulting in a very poor overall performance from their position players.  Their starting pitching has been solid, at least it has if you look at the peripherals (the team's fielding might be hurting their pitchers' ERAs).  Nevertheless, their bullpen has been just as bad as the Reds'.

And there's not much reason to expect that things will get much better.  They're projected to be a below-average team the rest of the way.  Based on this, and the fact that they currently sit in last place, FanGraphs gives them only a 6% chance to still make the playoffs this season.  That's largely due to the fact that no one has run away in the NL East.

Therefore, if I was the Phillies' GM, I'd think it was probably time to start thinking about a transition plan into the future.  The only player in their starting lineup or rotation who is under 25 is Cody Asche, who is a second-tier prospect.  Domonic Brown and Ben Revere are close at 26, but everyone else in this lineup is in their mid-30's.  Most will probably not be part of the next good Phillies ballclub.  Therefore, I wouldn't be surprised to see the Phillies try to dismantle parts of this team at the deadline this year.

Citizen's Bank Park is about as close a match as you'll find to Great American Ballpark.  While there are a few odd angles in left-center field, its dimensions are very similar to GABP's across the entire field, including the fairly short power alleys.  Its park factors are similar too: it plays as a mild hitter's park.  It's a good place to hit home runs, but all other events occur at pretty typical rates. 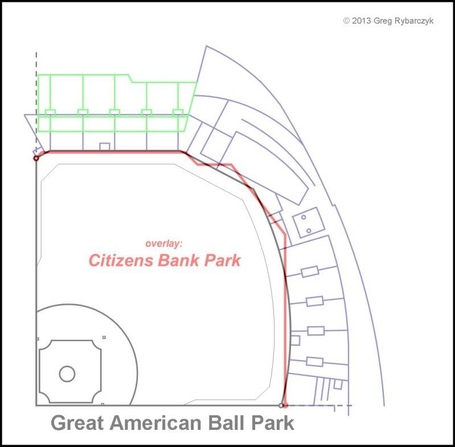 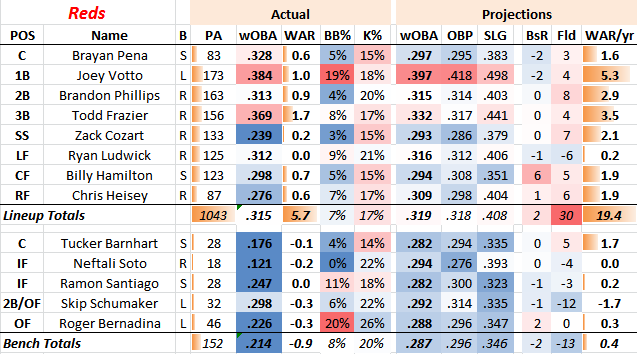 As I write this, there's still no word on whether Devin Mesoraco will return for this series.  I'm sort of expecting that he will, but I'll avoid changing the roster until it actually happens.

I continue to be stoked about the season that Todd Frazier is having.  He recently stated that he's trying to see more pitches this year and be more selective in the pitches at which he swings. I took a look at my blog this morning to see if that's showing up in the data.  Short story: it's not a big difference, but his swing rate is down a few percent.  While that hasn't shown up in more walks, Frazier is making better contact (fewer k's, lower swinging strike rate), and is showing improvements in both BABIP and HR/FB rate.  All of those improvements could be related to better selectivity at the plate.

Heisey had a good second game last night (about the only Reds hitter to have a good game), going 1-2 with two walks and a double.  But I was sure hoping he'd play better in this period while Jay Bruce is out of the lineup.  Here's hoping he'll be able to build on yesterday's game in the coming series.

Also, I thought Ramon Santiago's defensive play yesterday deserves some lauding.  So here I am, lauding it!  I'm not sure if someone with more range could have made that play look easier, but the pop-and-throw he did was total badassery.  Santiago is the only player on the Reds' bench who has not posted negative WAR so far.  Granted, he hasn't posted postive WAR either...but at least he hasn't been a negative! 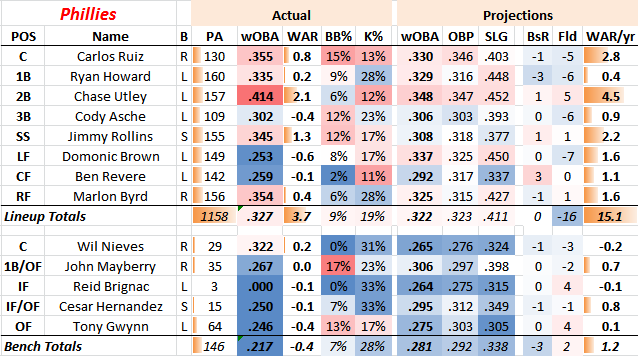 There was a time when I was convinced that Chase Utley was the best player in the National League.  And then, around 2011-2012, there was a time when I was convinced that his knee injuries had resulted in a premature end to his career.  Given how negative I was about his injuries, I'm kind of astonished, looking at his player page, that Utley never missed more than a half-season during that stretch from 2010-2012...and moreover never posted fewer than 3 WAR in a season.  Last year, he played most of a full year, and played well.  This year, seemingly healthy, the 35-year old is playing like it's the mid-2000's again.  He's Chase effing Utley.

Also playing well is a player that I feel I've pretty much always underrated, Jimmy Rollins.  Rollins appeared to be in teep decline as his power evaporated last year (6 HR is 666 PA's, after averaging 15-25 for most of his career), and posting the first negative UZR season of his career.  It's still early, but Rollins, also 35, has already hit 4 home runs, and is showing an outstanding walk rate.

Aside from Utley, Rollins, and the steady-and-underrated Carlos Ruiz, however, there isn't much help elsewhere.  Ryan Howard isn't a terrible hitter, but his defensive shortcomings and lack of remaining brilliance on offense make him only marginally better than replacement.  He also has $85 million let on his contract, which goes through 2016 (club option for 2017).  Domonic Brown just never has really panned out as a prospect, and Cody Asche, Ben Revere, and Marlon Byrd really should all just be bit players.

Not shown, but pulling down their season WAR totals, is Freddy Galvis, who managed to post almost a full negative win(-0.9 WAR) in just 48 plate appearances before a shoulder injury mercifully put him on the DL for 6-8 weeks earlier this week.

The most exciting game, by far, should be Sunday's matchup.  Assuming that Tony Cingrani does come off the DL, we have a match-up between two quality left-handed starters.  We know about Cliff Lee and his amazing strikeout-to-walk ratio, and he continues to be very strong this season.  Cingrani has his amazing fastball, but was showing some real challenges with control, and then velocity, before the Reds shut him down.  I think the Reds were very smart to give him some time off for the past two weeks given his arm troubles, and I'm hopeful that the time off will help him start his season over once again.

Cole Hamels, now 30 years old, has not been good so far this year.  His ERA is worse than his peripherals would suggest, but even his xFIP that shows a big drop-off in performance.  Most of the issues, however, appear to be control: his 3.8 bb/9 rate is very uncharacteristic for him, and would easily be his worst walk rate of his career.  His strikeouts and velocity appear to be there, however, and so I'm optimistic that he'll be able to turn it around.  Hopefully that won't happen until after this coming start against the Reds... 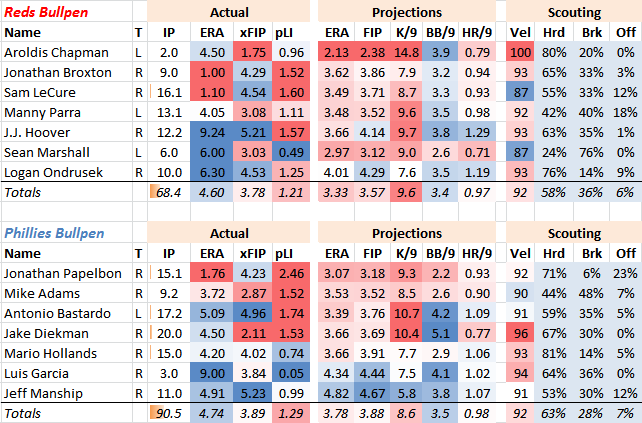 Based on both the names and the projections, the Reds really SHOULD have a better bullpen than the Phillies.  But so far, it appears to be race for which pen could be more awful.  Their closer, Jonathan Papelbon, hasn't given up many runs this year.  But he's been an extreme fly ball guy this season (35%), and yet hasn't given up a home run to date.  That seems unlikely to continue, especially when pitching in Citizen's Bank Park.  The accomplished Mike Adams hasn't been good since leaving the Padres in 2011, though he's thrown pretty well thus far.  Everyone else has struggled.  And aside from Jake Diekman, there's little in their peripherals to suggest that they can be excellent.

Reds: Nick Christiani was demoted after not showing a lot of effectiveness.  And Aroldis Chapman will be fine.  That pitch that Chase Headley hit was at the top of the strike zone and on the inside corner of the plate.  Headley just somehow still got around on it.  Tip your cap, and all that.

This Phillies team has some talented personnel remaining.  But they are aging, and (aside from maybe Utley) aren't likely to turn in the kinds of 5 win performances we've seen in the past.  When you couple them to the supporting cast of below-average players, you end up with a sub-.500 ballclub.  And that's where the Phillies probably will end up this year, for the second consecutive season.

That said, there's nothing here indicating that the Reds will have it easy.  Beating Cliff Lee continues to be daunting proposition, and I'm sure the Phillies are hoping that an outing against a diminished Reds offense is just what Cole Hamels needs to get back on track.  The Reds really need a good series here, because they face nine rough games in a row, starting on Monday against the Nationals.

JinAZ no longer lives in AZ, but is still continues to be named Justin.  He writes series previews here, and blogs about the Reds and the rest of the baseball at his own blog.