Red Reposter: With hope in one hand and ligaments in the other

Some folks might be coming back soon to play for the Reds. And there's a whole lot of weird other things going on in the world.

Share All sharing options for: Red Reposter: With hope in one hand and ligaments in the other

In the last Reposter we had C. Trent's great Brayan Pena write-up. In this Reposter, we'll follow up with Mark Sheldon's. In it, Sheldon mentions Pena's love of Game of Thrones, and also has a cute quote:

If I feel like I'm doing the right thing and being the best human being possible, I can live with that. I can go home and look my children in the eyes and say, 'Your daddy is making you guys proud, and tomorrow, I want you guys to do the same.' That's the way I was raised since I was little, and especially since I've been in the game.

Perhaps more interestingly is his quote about the Reds' lack of Stars-n-Turds divide:

The stars like Jay Bruce, Joey Votto and Cueto and Brandon [Phillips], they're always together and joking with each other. That says a lot. No superstars. Everybody is the same. When you see that, you feel like you belong in this clubhouse. It makes it easier for you to be happy."

So yeah, great story there. Please read it.

Sheldon's Reds wRapup for the day has lots of optimistic news. Mat Latos will be joining the Reds for their next road trip and get a simulated game in against some of the Reds unfortunately-all-too-real bench players. Mat Attack's end-of-May/beginning-of-June timeline is looking good, even if Price preaches caution.

Mesoraco began his rehab assignment last night (which you may have heard of in the expertly-written Farmer's Only) going 2-3 before being subbed out for Corky. The Golem could be back by Friday.

Jay Bruce is already on the Aunt Workout, jogging lightly before hitting the exercise back and elliptical. He said that it's "progressing very well," and that "I hope to jog toast like there is no tomorrow" and only one of those quotes is made up.

Nearly 20 MLB pitchers have undergone Tommy John surgery since Spring Training began, and Bryan Price is uncomfortable with that. He doesn't have any solutions, but he does say that it's "at an epidemic rate" these days.

Those pitchers breaking down are someone's son, I have a son. We, as an industry, we,as parents, can do something about it

Considering Mack's rather emotional nature, this isn't much of a surprise. But considering that we had a recent "love the arm, hate the pitcher" conversation here, I wonder if Mack's enthusiasm for the pitcher is related to the Reds' recent run of good health. The only guys I can really think of who've broken are Ravin and Lotzkar in the minors (as well as Muhammad and Langfield more recently), but we've come a long way since the days of Thomas Pauly. I would sincerely love to get Jenkins' ideas on how to protect the Reds' arms. The difference between the Reds and the Diamondbacks these days is basically pitcher health.

Ben Lively is in Cistulli's Fringe Five prospects, and Cistulli notes that he leads all of the minors in K% at 35.3. Since then, Mike Fiers -- the 29-year-old Brewers has-been -- has overtaken him in the ratings, but still. Lookin' Lively out there, if I may say so.

I'm not sure if we've gotten this or not, but David Laurilia has a neato writeup about Parra's resurgence as a reliever.

"Hamilton wants to win a stuffed elephant for Devin Mesoraco, who's been down in the dumps lately." There's a new Yakkin', which I always find hilarious. This one features Billy Hamilton's Very Bad Swing ("Just the friendliest swing. Like he was trying to pat the ball on the head."), so it's worth a read.

Always nice to have memories of Dusty Baker being a very rad dude. When remembering that Tommy Lasorda was a homophobic prick who hated his own son, not to mention Glenn Burke, it's good to remember that Dusty took the young Burke under his arm. Awesomely-named blog Vin Scully is my Homeboy has some good Dusty Quotes.

The White Sox wore pink hats for Mother's Day, which I think is a pretty awesome look, is it not? 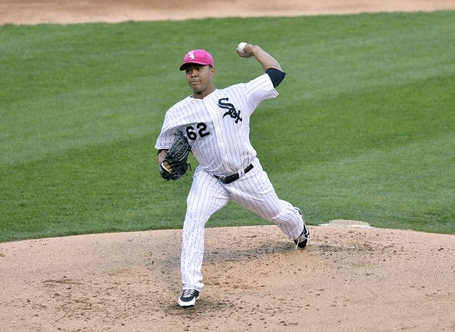 It's about Cleveland and I guess it's about football, but I love Pete Beatty's work so I'm going to post it. What do you do if the Devil comes to you willing to make a deal about your favorite team? More ~problematically~, what if the Devil just goes to another Reds fan?

For the nerds in the audience, a 2 billion year-old nuclear reactor was found in Western Africa. It is natural and not the work of hands human or otherwise....we think.

Some baseball scribes, including our own CTR, talk about their favorite players growing up. Yours was Eric Davis, obviously, so I'm not going to ask you. But I love the intro of this piece because Adrian Beltre is fantastic and no matter how rad Todd Frazier is I wish that Beltre was a Red.

The "Films Inspired by Yasiel Puig" list is worth plenty of chuckles. Grant Brisbee's script for There Will be Puig is fantastic, but I think that Hanstock's Wes Anderson knockoff is by far the best.

"On the Sexism of Football" is a dry read, so I won't be upset if you don't read it. But there's an interesting part in it where Matthew Kuper badgers Jennifer Doyle about the "natural" supremacy of men, saying that Neymar (a Brazilian male star) is obviously better than Marta (a Brazilian female star). Doyle's response is clever:

They would not take on each other; they are both attacking players. They’d likely be on the same team, or on opposite ends of the field. You mean ‘Marta could not take on Puyol.’ And I want to see that. Maybe she couldn’t, but what if she could? People don’t always ‘take on’ other players by, say, outrunning them. And if she’s slower than Puyol (I don’t know that she is), she’s also a lot smaller. He’d have a hard time tackling her.

Considering that women will be in baseball probably before I die, it's an interesting point to make. The female baseball star doesn't have to be Johnny Cueto, she just has to be above-replacement. Is the a lady out there who's a better pitcher than Nick Christiani? I bet there is.

For what it's worth, I think the first female is going to get into the NBA before the MLB, NHL, MLS, or NFL. A lady who can spot-up threes and play defense? Definitely.