The Reds square off with a Padres ballclub that has struggled to score runs. And their issue is not just their park.

Share All sharing options for: Series Preview: Padres at Reds

Note: I made a change to my spreadsheets to change the color-coding scheme from red-->yellow-->green to blue-->white-->red.  This makes the color-coding more approachable for the many individuals who are unable to distinguish reds from greens, and (hopefully) makes the charts a bit less offensive to eyes of all kinds.  It does take some time to get used to the new scheme, because red is now "good" instead of "bad."  Think red=hot, blue=cold.  Let me know what you think! 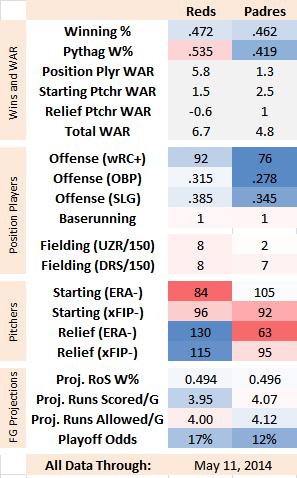 Following an resilient winning series against the Rockies, the Reds welcome to San Diego Padres to town.  The Padres are a team that, entering the season, ranked as a fairly middling club: some good pieces, but also without a lot of depth, and so a club that one could see as a surprise contender or a basement dweller.  Things haven't gone their way thus far.  While they have managed a similar record to the Reds, their overall numbers suggest a much weaker team (both in terms of run differential and WAR).  The top of their rotation has been quite good, and their bullpen has been amazing.  But their offense has been awful.  While the park does play into those numbers a bit, their park-adjusted wRC+ is tied with the Cubs for the worst in baseball.

For what it's worth, FanGraphs projections see them as a pretty comparable team to the Reds over the rest of the season.  They have a number of quality hitters who have hit massively below their career marks thus far, and the projections predict their offense to recover, even if their pitching slips a bit.  Their record to date is similar to that of the Reds, and the project for a similar record the rest of the way.  Therefore, they have about the same shot at a wild card berth as the Reds (~7%).  The reason the Reds have a (slightly?) better shot at the playoffs is that the Reds only have two teams in front of them, whereas the Padres have three. 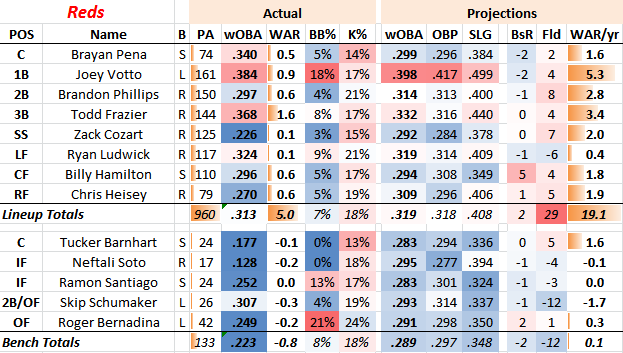 Billy Hamilton returned to the starting lineup Sunday after a long time off, and immediately had an impact.  He got on base three times, and scored the first run of the game thanks to an errant (and arguably rushed) throw by Justin Morneau on a bunt single, followed by a Skip Schumaker groundout.  This is the first series preview that I've done this year in which his actual wOBA meets or exceeds his projection.  There's no question that he's been better since his awful first two weeks.  And, according to the measures at FanGraphs, he is already about a third of the way to his projected season WAR.  Therefore, the projections, at least, think that what we've seen of Hamilton, in sum, is a good indication of what we'll see from him moving forward.

There was a short but interesting discussion on a recent FanGraphs audio about the Minnesota Twins' apparent new hitting strategy, which basically involves taking a lot of pitches (they rank last in baseball in Swing %).  One of the arguments that Dave Cameron made is that the players who stand to benefit most from a more selective approach are hitters like Hamilton.  Hamilton is not a guy who gains a lot when he swings the bat, compared to a guy who has a lot of power and can add real value when he places the bat on the ball.  Hamilton's offensive value is entirely wrapped up in his ability to get to first base, and little else.

Hamilton's swing rate is actually right about average (45% career vs. 45% MLB average), but that hasn't translated into a lot of extra walks (only 5% walk rate).  I think he can be effective when he hits the ball on the ground, but he is not really a ground ball hitter (46% career ground ball rate is about average).  Given that he makes good contact (86% career vs. 79% MLB average), however, I'd love to see a Hamilton that adopts a Marco Scutaro-type hitting approach: be patient, take pitches, and only swing when you get your perfect pitch...or when you have to with two strikes.  His contact rate should make him an effective two-strike hitter.

Of course, that's easier said than done.  Hitters can't just change their approach at the drop of a hat.  They are reaction machines that have trained themselves to make split-second decisions in a time frame that doesn't allow a thoughtful, considered approach.  One can't discount the argument that a hitter's aggressiveness (or patience) is part of what has made him successful to this point in his career, and trying to become more patient (or more aggressive) could have unintended, negative consequences on other aspects of how a player hits.  But that doesn't stop me from dreaming about it! 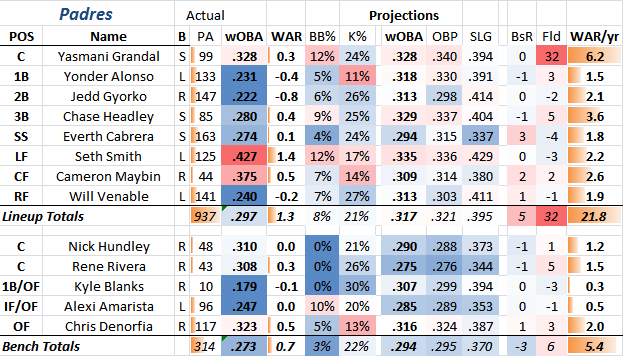 You know that really slow start to the season that Zack Cozart is having?  Well, the Padres have that with three of their starters.  All of Yonder Alonso, Jedd Gyorko, and Will Venable have been just as bad as Zack Cozart this season at the plate.  And unfortunately for the Padres, none of them are sure-handed, rangy shortstops like Cozart is.  In fact, one of them, former Red Yonder Alonso, is a first baseman!  Former prospect Kyle Blanks was recently promoted and is in a platoon now with Yonder at first base, at least until one of them starts to break out.  Gyorko is a favorite of mine: an offense-oriented second baseman with nice pop, he's been terrible so far, as has Venable. Not far behind that crew is Chase Headley, who was counted on to be the Padres' top hitter.  He's missed some time, but he hasn't been his normal, productive self either.

I'm openly rooting for Chris Denorfia to win the job over his platoon partner, Venable.  But I've always been a Denorfia guy.  In fact, I think my first fanpost here at red reporter was a first-hand account of seeing him play in the Arizona Fall League (Joey Votto was also on that team, unless my memory is failing me).

On the plus side of the coin, the other major piece of the Mat Latos deal to for the Padres, Yasmani Grandal, has been excellent once again, even (presumably) without the PED's!  He's a patient switch-hitter who gets on base, and I think still may have some power that hasn't shown up yet.  On top of that, based on work by Harry Pavlidis, he also might be the best pitch framer in major league baseball.  I'm going to be watching to see if I can notice something about what he does: glove movements, head movements, etc.

Their best hitter, at least against right-handers, has been former Colorado Rockies outfielder Seth Smith.  Smith has always been a guy who can hit, and it seems like he's finally secured a full-time starting job after two fairly disappointing seasons with Oakland.

I paid a lot of attention to Cashner when he debuted for the Padres in 2012, but not last year.  Therefore, it was quite a surprise when I saw what he has become.  I remember a guy who was throwing 97 mph, striking out 10+ per 9 innings, and getting obscene ground ball rates for a strikeout pitcher.  His groundball tendencies have persisted, but Cashner now "only" throws about 94 mph, and his strikeouts were way down last year...but so were his walks.  The result has been a really good pitcher who is now considered the ace of this Padres staff.  Mike Leake will have his work cut out for him.

It doesn't get much easier after that, because the Reds then are dealt the Padres' #2 and #3 starters in Ian Kennedy and Tyson Ross.  I don't put any stock in "vs. team" splits, but I do think it's interesting (in a historical sense, not a predictive sense) that Kennedy has been so dominant against the Reds (career 1.53 ERA in four starts, 22/5 k/bb ratio).  And this year, he seems to have rediscovered himself.  He's historically been a pretty extreme fly ball pitcher (career average 38%), but somehow this year, with the Padres, he's getting 47% ground ball rates.  And so far, anyway, he's posted ridiculous strikeout and walk rates (10+ k/9, ~2 bb/9).  He's been a beast.

But so has Johnny Cueto.

It feels sooo nice to have Aroldis Chapman back.  Closers have limited abilities to impact seasons, but having Chapman back is bound to impact some games.  The Reds finally have their bullpen set up as they'd planned in spring training.  And given how severe some of the injuries have been--Chapman's injury of course, and Marshall's lingering shoulder issues from last season--that's pretty exciting.  Let's hope that those with bad peripherals but good results can keep getting outs, and those with good peripherals but bad results can start to see the fruits of their labors.

On that note, I continue to be fascinated by Logan Ondrusek.  For his first three seasons, Ondrusek was a guy who always had an ERA that was far better than his strikeout, walk, home run, and ground ball rates would indicate that it "should" be.  This was epitomized in 2012: a 3.46 ERA, but also a 5+ walks per nine innings, and only slightly higher strikeout rates!  Then, last year, something happened.  His strikeout rate soared to 8.7 k/9, his walk rate dropped to 2.6 bb/9...and his ERA shot up over four for the first time in his career.  This year, his peripherals are the same as, if not better than,last year's...and his results have been even worse.

From everything we know about pitching, Ondrusek should be on the right track with whatever changes he's made in his approach.  I'm going to be very interested to see where he is at the end of the season.

By ERA, the Padres have the second-best bullpen in the major leagues.  That's probably overrating them by a bit, but this is unquestionably a very solid group of arms.  Huston Street and Joaquin Benoit are big names, but the others are much less well-known (to me, anyway).  I was surprised to see Tim Stauffer in this pen, because the last I'd noticed him he had a nice (but maybe injury-shortened?) year in the Padres' rotation in 2011.  Last year, however, he converted to the bullpen, and was very good for them.  He seems to be used primarily as a long man (69 innings in 43 appearances last season).

The good news is that despite the fact that the Reds are drawing the best part of the Padres rotation, they still get to pitch to the Padres offense.  Hopefully that offense will continue to struggle, which could lead to some low-scoring games.  This and the next series are pretty important to the Reds, because next week they begin a brutal 9-game stretch against the Nationals, Cardinals, and Dodgers.  If they're going to make up some ground on their record, now would be the time to do it.

JinAZ is still named Justin but no longer lives in AZ.  He's back to blogging about Baseball and the Reds, both here and at his own blog.