This Week in JPEGs - Now with corporate sponsorship! (and too much Matt Adams)

Share All sharing options for: This Week in JPEGs - Now with corporate sponsorship! (and too much Matt Adams)

Welcome back, all! Baseball was dormant for way too long, but our darkest, coldest nightmare is over. Baseball is back, and with it the opportunity to draw stupid pictures in MS Paint.

Matt Adams vs. The Fans

Perhaps nothing in Reds' baseball over the past few years has been as perfect an episode fit for JPEGing than the incident involving Matt Adams and the Reds fans in the front row down the first base line. In case you haven't seen it yet, here's the gif:

What intrigues me about this episode is the way that perspective can so dramatically change perception of what we generally think is an objective reality. It is in moments like this when I become keenly, painfully aware of the shackles of subjectivity and how it can create vast, unbridgeable gulfs between us. It is in these gulfs, deep in the nothingness, that the malevolent demons of opposition and hostility thrive.

And so I have chosen to illustrate here the moment just before the fan catches the ball. The section on the left is presented from the point of view of Adams as he lunges into the stands. The point of view on the right is that of the fan as Adams barrels down upon him. 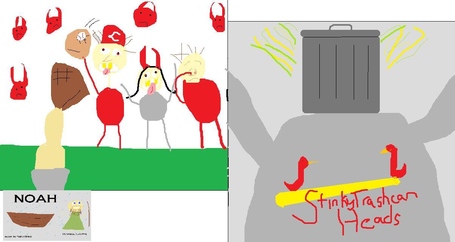 The Reds have only played three games so far, so there really isn't a lot of baseball here from which I can draw inspiration. So it is with great reluctance that I present to you yet another Matt Adams JPEG. I'm sorry, everyone.

In Game 2, Tony Cingrani sliced up the Cardinals to the tune of nine strikeouts and just two hits and two walks allowed. One of those walks was surrendered to Adams in the top of the fifth inning. Tony promptly picked him off first base. The Red Reporters present at the game, soaking themselves in beer and TWSS jokes, likely wooped with pleasure, if they were still conscious. 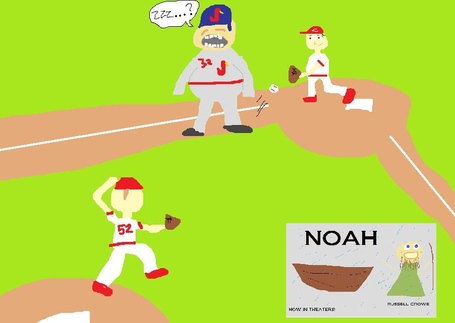 In the first inning of Game 3, Jay Bruce put the Reds on the board with a towering home run more than halfway up the moondeck in right field. It was majestic, fantastic, exquisite-ic. Todd Frazier followed him with a monster blast of his own, launching the pitch some 474 feet. The ball landed above the Kroger strikeout thing in the right field bleachers and produced a sizable mushroom cloud and impact crater. Fortunately, the home run caused only minor injuries as Frazier, being the nice guy and lifesaver that he is, was able to race up into the stands and clear the impending blast radius of spectators before impact. What a nice guy. 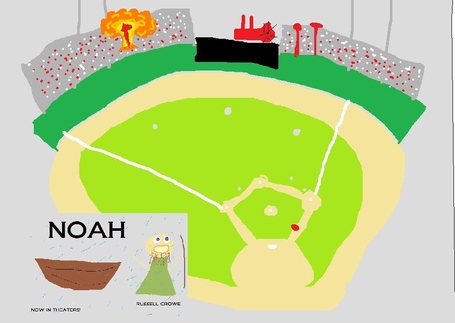