The Braves are hot and look strong, but, despite its success, there are some legitimate questions about their rotation.

Share All sharing options for: Series Preview: Reds at Braves 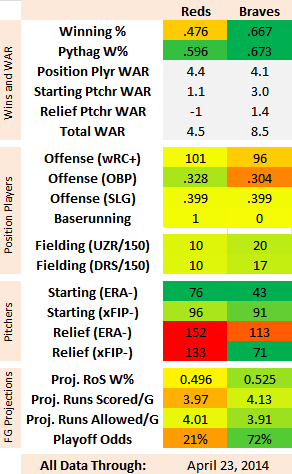 Having won their last three series, and having finally climbed back to 0.500, the Reds continue their road trip by flying to Atlanta today.  The Braves are an interesting team.  While they were clearly very competitive in their division as spring training began, they ultimately lost two of their best starting pitchers for the season (at least) to Tommy John Surgeries.  Kris Medlen and Brandon Beachy aren't the kinds of pitchers that are easily replaced, and both are going under the knife with Ulnar Collateral Ligament surgeries for a second time.  Unfortunately, the recovery rates for second-time UCL surgeries aren't as rosy as first-timers.

Nevertheless, despite those challenges, the Braves have flourished in the early-goings.  They immediately signed Ervin Santana to replace one of their lost starters, and are employing former Red Aaron Harang as well as younger players like David Hale and Alex Wood in their rotation.  And gracious, they've gotten great results from these replacements.  Santana was already a quality pitcher, but Harang hasn't been good since his days with the Reds.  Nevertheless, he and Santana are currently at the top of the NL ERA leaderboards at 0.85 and 0.86 ERAs, respectively.  I'm a little sad that the Reds don't get to see Harang, but at the same time I'm happy because I don't have to root against the big guy!  I hope he has a fantastic season.

The Braves' offense hasn't been as good thus far.  Some of their hitters are off to fantastic starts, but others have really struggled.  Their bullpen has also gotten roughed up a bit, though their peripherals (and talent) remain strong.

This is going to be yet another challenging series for the Reds.  They're facing a team that can really do just about everything well, and have gotten off to a great start to the season.  There may be some cracks in their armor, however, and, with a little luck, the Reds can win this series.

As you can see from the sketch below (courtesy of hittracker), Turner Field is a much larger park than Great American Ballpark, particularly down the power alleys to left and right fields.  Overall, it plays pretty fair, however.  It is tough of right-handed home runs, but about league average for every other batted ball type.

Despite its relatively young age (built 1997, home of Braves since 1996), baseball at Turner Field may be coming to an end.  The Braves' lease expires at the end of the 2016 season, and it looks like there's a good chance that the Braves could move to a new location at that time.  Why in the world a local community would invest that kind of money in a stadium when countless economics studies have shown that it's clearly not worth the investment, I really have no idea.  But while everyone seemed skeptical at first, it seems like this is happening.  Seems like a waste, to me. 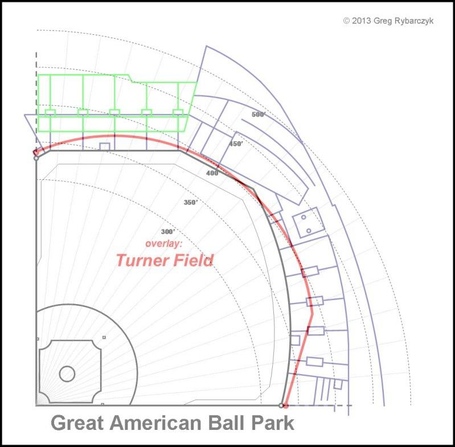 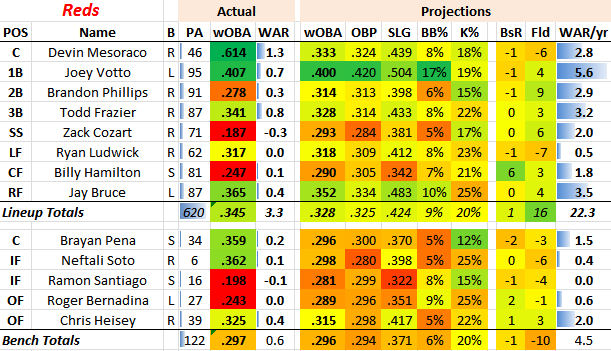 After a poor start, the Reds' offense has finally pushed itself over the league average mark.  In fact, of late, the offense has been downright excellent.  Before yesterday's 2-1 victory over the Pirates, it had scored at least four runs in 11 consecutive games!  Devin Mesoraco has been a huge shot in the arm, but so has Jay Bruce's reawakening, plus continued good contributions from Joey Votto, Todd Frazier, and decentness out of Ryan Ludwick/Chris Heisey.  Billy Hamilton and Zack Cozart are slowly seeing their season numbers creep upward.  And while Billy has been getting thrown out stealing more often than I'm comfortable with, he's also unquestionably changed innings--and games--as a result of his speed.

Also, I'm officially a Little Concerned about Brandon Phillips.  His strikeout rate has taken a huge spike upward in 2014 at 24%, whereas his career rate is around 14 (14.7% last year).  Strikeout rate is one of the first statistics to stabilize for hitters (70 PA's by Pizza Cutters r=0.7 cutoff), and Phillips is at 90 PA's and striking out about two thirds more often than usual.  His swinging-strike rate is up to 16% this year after hovering in the 9-11% throughout his career, and (though his is kind of the same thing) he's showing much lower contact rates on pitches in the zone (79% vs. 88.5% career).  Phillips is a free swinger, and I'm sure that aggressiveness is part of what has made his approach work.  But he's always gotten away with not being selective by having good contact rates throughout his career.  If that's slipping, he could be in trouble. 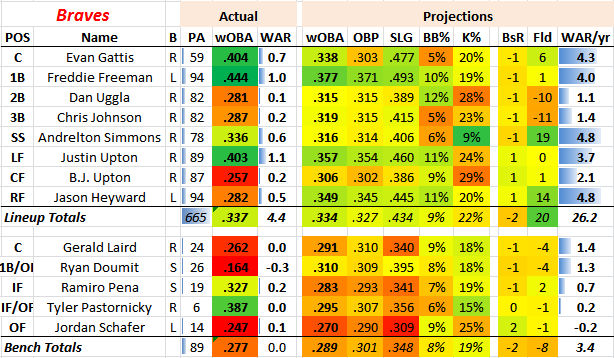 With the exception of B.J. Upton, the Braves have what should be average to above-average hitters at each position in their batting order.  Upton had a horrific season last year, and isn't showing much improvement this season despite claims this spring of adjustments to his mechanics in the offseason.  He's a guy that can contribute a lot with his fielding, but he has to hit a little.  Last year, the Braves ended up going with Jason Heyward in center field and benching B.J. in the playoffs last year.  Heyward is a good enough fielder to make that work, but I'm sure the Braves are hoping that B.J. can find his stoke once again and justify some of the contract they gave him.

Also of note is that the Braves have the guy who is almost unanimously tapped as the greatest defensive shortstop in baseball.  I'm excited to see him play.  I haven't been able to watch him a lot, but his ability to post silly-looking fielding numbers reminds me of Adam Everett during his peak.  The scary thing is that he can hit too; he projects as a league-average hitter, and is off to a better-than-average start.  Also off to great starts are Justin Upton, Freddie Freeman, and Evan Gattis, who is doing his best to make everyone forget the name Brian McCann.

Ervin Santana is off to a terrific start, despite missing most of spring training while he waited for someone to at least match the qualifying offer he received from the Rangers Royals last Fall.  David Hale has also had good results, though neither his peripherals (4.66 xFIP, 5.3 bb/9) nor his projection (4.83 ERA) suggest that he's likely to continue that success.

Julio Teheran had a nice debut season last year that largely justified all of the hype he'd received over the years.  This year, while ERA looks great, his xFIP hasn't been as positive.  That's due to a much lower than usual strikeout rate (5.4 k/9 vs. 8.2 k/9 last season), which has been accompanied by an early-season drop in fastball velocity (89.8 mph vs. 91.5 mph last season).  I haven't seen much written on this, but I wonder if anyone is raising an eyebrow in Atlanta about him.

With Sean Marshall back in the fold and apparently feeling well, and with the Reds starting to talk about rehab assignments for Aroldis Chapman, the Reds' pen finally seems to be stabilizing.  Holding the 2-1 lead in yesterday's game with a major feat for them, and hopefully we'll see some more success from this group moving forward.  Aside from Marshall's two appearances innings, only Manny Parra has posted even a respectable xFIP so far this year.  I hate to ever say a whole lot about relievers because one is always working with extreme small samples, but it's certainly the case that we'll need to see that improve if this pen is going to become effective.

Thank goodness the starters have been so good!

This Braves Pen looks scary.  Ignore the ERA column.  Their 2014 xFIPs are almost universally fantastic, and their projections are almost all very good.  Luis Avilan is maybe the weakest link among pitchers who are likely to see high-leverage situations, but fellow-lefty Ian Thomas looks like he can step into that role if Avilan continues to struggle.  And Craig Kimbrel still looks like Craig Kimbrel.  0.79 xFIP, 0.87 SIERA, 0.15 FIP, 19(!) k/9.  That latter number is funny.

The Braves look like a good team, and are off to a great start.  Their main question moving forward will be whether their starting pitching can keep up at least quality performances once it starts to regress.  They need Teheran to rediscover his strikeout rate, Aaron Harang to really have reinvented himself, and young gun Alex Wood to materialize.  Fortunately, I think the Reds match up pretty nicely for this series.  Game 1 looks like a pretty even match-up, and I like the Reds' chances in games 2 & 3.  It would be awfully nice to take a 0.500+ record with them when the Reds return to Great American Ballpark on Monday to host the Cubs.

Also, on that note, I'm planning to skip the Cubs preview, because we just previewed them last week.  I'll be back next Thursday with a profile on the blistering-hot Milwaukee Brewers...hopefully after they start to fall back to earth a little bit.

JinAZ no longer lives in AZ, but he is back to writing series previews here at Red Reporter.  He also writes about baseball and the Reds at his blog.