The Reds are off to Chicago to take on the Chicago Cubs. This weekend series presents a great opportunity for the Reds to make up some ground in the NL Central.

Share All sharing options for: Series Preview: Reds at Cubs 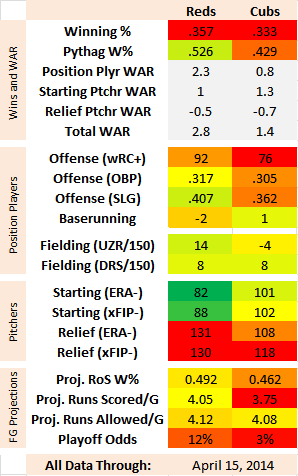 After an off day today, the Reds fly to Chicago to take on the Cubs in a trio of day games at Wrigley Field. This is one of those rare April series where the Reds really can be considered the odds-on favorites to win most games.

The Cubs are doing a lot of things right, but they are in the middle of a rebuilding process right now. As a result, while they have some talent, and are far from the worst team in baseball, they are going to be hard-pressed to finish over 0.500 this year. Their pitching rotation has been solid thus far, and are projected to have comparable runs allowed to the Reds this year. But their offense is pretty weak, and, so far at least, their bullpen hasn't had a lot of success.

The Reds are coming off their first series win, and are in the midst of their longest winning streak of the year! Interestingly, even before yesterday's 4-0 win over the Pirates, they actually had a positive run differential (now at +7 on the season). Therefore, despite the current 0.400 winning percentage, their Pythagorean record is actually above 0.500. The offense has been rolling along nicely since Joey Votto moved to the 2-slot and Devin Mesoraco returned from the DL with a chip on his shoulder. The rotation continues to be other-worldly (again, that 82 ERA- was BEFORE Cueto's 3-hit shutout) as well.

Wrigley Field plays as a hitters park. As we've seen over the years, however, a lot of that depends on the current weather conditions. When the wind is blowing toward the outfield, the place is a launching pad. The park is favors righties more than lefties due to its short porch to left-center, and the deep notch down the line to right...although it's worth noting that for a lefty like Joey Votto, who hits a lot of opposite-field home runs, the park probably favors him more than a typical lefty.

Also, fun fact: The Cubs' Junior Lake hit a home run that cleared not just the stadium, but it even cleared Waveland Avenue earlier this season. 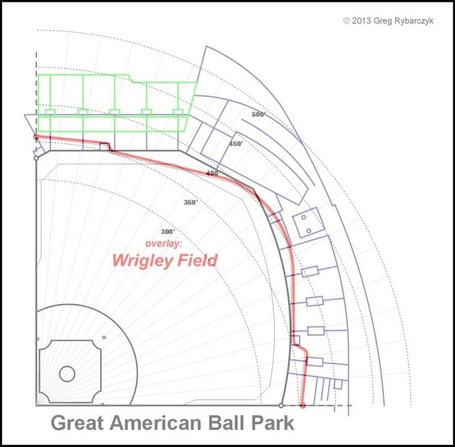 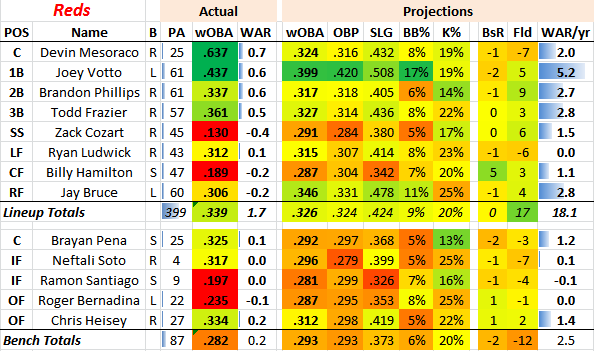 Devin Mesoraco's WAR all of last season was 0.4 at FanGraphs and 0.3 at Baseball-Reference. He's already at 0.7 fWAR and 0.6 bWAR this season. Good start! And Joey Votto is just crushing it. I thought it was interesting to see Heisey bat in front of Ludwick yesterday. Ludwick hasn't been bad, but I'd be glad to see Heisey continue to get playing time. There's no reason that he can't spell Billy Hamilton over Roger Bernadina in center field, either. 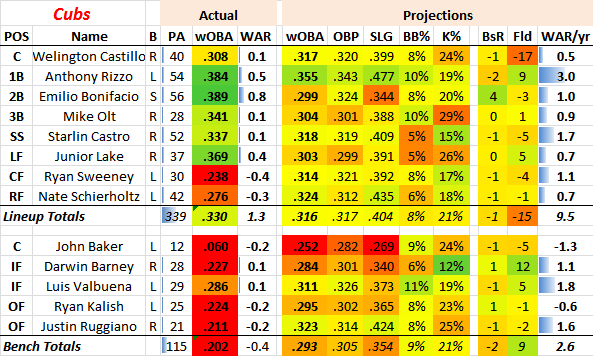 Wellington Castillo is getting hit by a really tough framing projection (-18 runs), based on his past performance. If you don't buy those numbers, you can bump his projected WAR/year by almost 2 wins; a league average hitter and an average-fielding catcher is a solid player. The best hitter on this team should be Anthony Rizzo, and he is off to a nice start. Emilio Bonifacio is also off to a great start having secured the starting second base job from Darwin Barney (mostly, anyway), though he might be cooling off a bit now. The versatile Bonifacio did post a 2.8 WAR season in 2011, but otherwise hasn't cleared 1 WAR.

The aforementioned Junior Lake is the guy I didn't know here. Scouting reports seem to paint a picture of an athletic, toolsey, but raw player. He put up respectable numbers last year in a little less than half of a season, despite low walk rates and lots of strikeouts. The projections expect a pretty substantial regression from him moving forward (his career BABIP is 0.376).

Edit: I made a mistake in my spreadsheet, so the original chart and text was incorrect.  Sorry!

The Cubs probably have the advantage in game 1, as the projection for Simon is based on him as a reliever, not a starter.  Nevertheless, he's been awfully impressive thus far; maybe his numbers don't support a 1.20 ERA, but he's been more than adequate as a #5 starter.  The Reds should sport a good advantage in games 2 and 3.  Both Edwin Jackson and Carlos Villanueva have been getting crushed thus far...but, in the case of Villanueva, at least he has excellent facial hair.

I think it's worth taking a moment to talk about Homer Bailey. I wrote about him on my blog a few days ago, because his stats to date are pretty interesting. Homer is not off to a great start, at least not in terms of his raw numbers. His xFIP is a pretty spiffy 2.81 right now, however, on account of career-average walk rates, 10+ k/9 strikeout rates, and a 51% ground ball percentage. The only numbers that seem to be driving his terrible results thus far are the ones that are most volatile for pitchers: BABIP and HR/FB%. Sunday, facing a fairly weak Cubs lineup, would be a great time to get his season turned around.

If I'm going to apologize for Homer Bailey's numbers thus far, I'm just going to cover my eyes when we look at the Reds' bullpen. Hoover and Ondrusek have suffered the most, but the xFIP column is just scary right now. Manny Parra threw a bad pitch to Neil Walker the other night, but he continues to be the most productive Reds pitcher--and the one who has carried the heaviest load.

MLB Depth Charts currently lists all three of Pedro Strop, Hector Rondon, and James Russell as closers. Strop and Rondon own the Cubs' only two saves, so that matches up pretty well. In the early goings, however, it's Jose Veras who has received the highest-leverage situations, with pretty catastrophic results (not unlike the Reds' own J.J. Hoover). Justin Grimm is off to a nice start as well, with his share of important outings. Their two lefties are both soft-tossers, and the projection systems, at least, don't see James Russell, at least, as deserving of a major league job.

The results haven't been pretty thus far. But while they might not have a lot of top-tier talent, this looks like a pretty deep pen on the surface.

This series is a great opportunity for the Reds. They've struggled thus far, but this is only the second "bad" team they've had the chance to play this month. Everyone other team they've faced--or will face this month, for that matter--is expected to either be at the top of their division, or in contention for a wild card spot. While the Reds face off with the Cubs, the Cardinals play the Nationals, and the Brewers and Pirates are facing one another. Hopefully, the Reds can gain a little bit of ground this weekend.

Programming note: After this series, the Reds head to Pittsburgh for a 4-game series against the Pirates. Given that we just previewed the Pirates, I'm going to take that series off. The next series preview will be for the Reds' trip to Atlanta next weekend.

Justin no longer lives in AZ, but is back to writing series previews at Red Reporter! He also writes about Baseball and the Reds at his blog. His favorite Excel function is vlookup().