The Reds are still looking to win their first series of the year as they welcome the reeling Pittsburgh Pirates for a three game series.

Share All sharing options for: Series Preview: Pirates vs. Reds 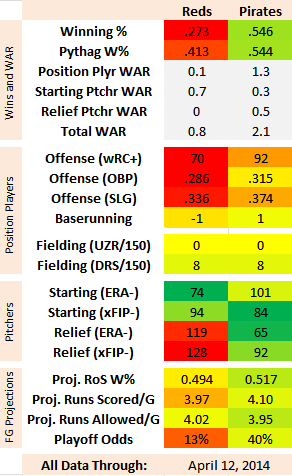 It was another series lost against the Rays, but at least Sunday's decisive win gives a reason for optimism as yet another quality team rolls into Cincinnati.  The Pittsburgh Pirates were last year's Cinderella story.  Most analysts expect them to regress this season, and their team projection of a game or two above 0.500 is in keeping with that.  But, at least until this weekend, they have gotten out of the gate well, thanks to adequate hitting, good fielding, and solid pitching from their rotation through their bullpen.  They just completed a 3-game series in Milwaukee, however, where the ridiculous 10-2 Brewers swept them and sent their record back down to 0.500 (the data to the right is a day old; sorry!).

I like this Pirates club a lot more than I expected to coming into this.  With one exception, their lineup looks both young and solid, and they have a deep bench that they can use to try to platoon away some of their weaknesses.  Their rotation looks solid as well, and includes at least one young guy with a lot of upside.  And I like that they are innovative: their aggressive use of the shift last season has been cited as an important reason for their success.  In a lot of ways, they remind me of a light version of the Rays.  If they can keep inserting useful parts into their pitching rotation, this is a team that can be a major presence in the NL Central for a long time to come. 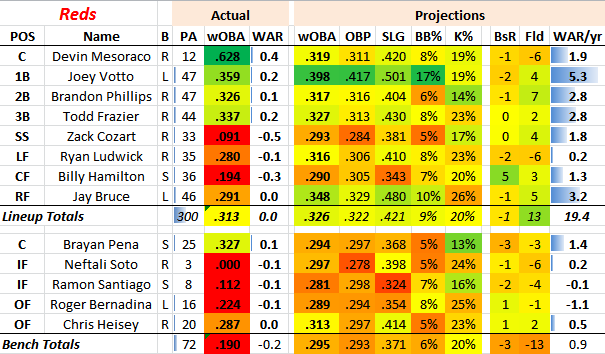 The big news with the Reds' offense is that Bryan Price changed up his batting order, swapping Brandon Phillips and Joey Votto, and bumping Frazier up to the #5 slot.  I'm a fan of Joey Votto batting second, but not for the reasons that you hear cited on talk radio.  The issue is that he is probably too good to be hitting third; getting his bat higher in the order both gets him a few more PA's, and will allow him to bat with less than two outs more often.  Given his terrific on base skills, this is a good thing.

In the two games that the Reds have played since Price adopted the new lineup, the Reds have scored a total of 12 runs! (teehee, see what I did there?)  I'm interested to see if he sticks with it.

And my goodness, how exciting has it been to see Devin Mesoraco just smash the heck out of the ball since coming up?  Keep hitting, Devin! 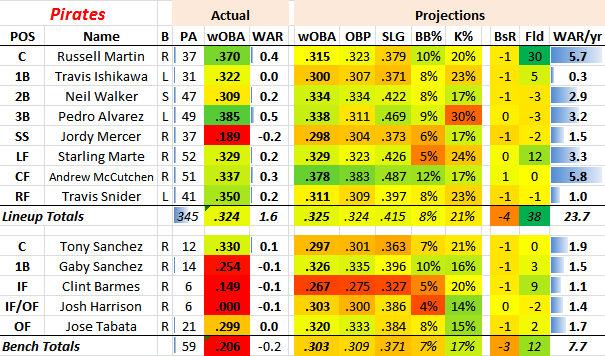 The biggest hole on this Pirates team has got to be their first base situation.  With Justin Morneau and Garrett Jones leaving as free agents in the offseason, the team is looking to use a platoon of Gaby Sanchez and Travis Ishikawa.  I'm not a huge Gaby Sanchez fan, but I'm pretty skeptical that Ishikawa will hold up his end of the platoon sufficiently to keep the job.  I like their Travis Snider/Jose Tabata platoon in right field a bit more; Snider at least has some pedigree (though no MLB results to show for it...), and Tabata can be an exciting player when he's hitting.

They have some great players.  Andrew McCutchen is the reigning MVP--deservingly so--and Russell Martin is both a league-average hitter (as a catcher!) and a superb pitch-framer.  Starling Marte loves to swing at pitches a little too much, but otherwise is a fabulous player with both offensive and defensive skill.  Jordy Mercer is a bat-first shortstop (and off to a poor start), but the guys around him are above-average MLB players in Neil Walker and Pedro Alvarez.

It's not a great offense.  But as a whole, they're good, deep, and versatile.

Each of these games looks like a pretty even match, though I think it's fair to give Garrit Cole the edge in game two...and an edge to Homer Bailey tonight.  The showdown between Francisco Liriano and Johnny Cueto on Wednesday afternoon has the makings of a really fun ballgame.

The rebirth of Francisco Liriano was a huge part of his team's success last season.  His career has been notorious for its ups and downs.  Thus far, however, he's looking good.  Through three starts, he's striking out more than 10 per nine, and (perhaps more importantly) keeping his walk rate right at his projection.  In the years when he's imploded, Liriano's walk rate has soared as high as 5 per nine innings.  He's always been a slider-heavy pitcher, but with the Pirates he's been throwing his change-up more than ever--and throwing fewer fastballs.

I've only had the chance to see Gerrit Cole pitch one time before.  Unfortunately, I'm in the Pirates' blackout zone for mlb.tv, so I won't get to watch this one either.  Cole has had a good start to the year, but he's not throwing his change-up much thus far (3% this year vs. 8% last year).  Instead, he's favoring his curveball a bit more.  We'll see if the Reds' lefties can take advantage of that in Tuesday's game.

And unfortunately, the Reds don't get to see Edinson Volquez this time around.  Volquez is aiming to be the Pirates' latest successful reclamation project, following on the heels of Liriano's success last season.  So far, it's been going well: 1.29 ERA, 3.55 xFIP... His strikeout rate has is only 6.9 k/9, but he's not walking anyone(1.8 bb/9!), and getting plenty of ground balls.  He's not throwing his change-up quite as often as he used to, and is throwing more curveballs.  I'm pulling for the guy...except when he pitches against the Reds. 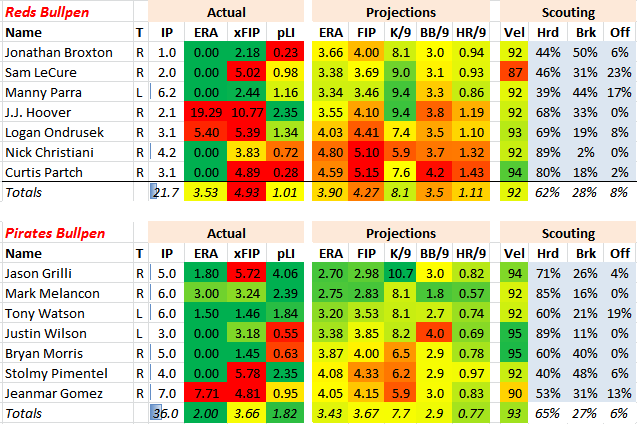 Take a look at the difference in total innings pitched thus far between the two bullpens.  Two of the Reds' innings went with Trever Bell to the disabled list from my total, but the Reds' starters have done a very good job of pitching pretty late into ballgames.  As a result, we haven't seen a lot of the Reds' pen...and that's probably a good thing, given its beleaguered state.

The Pirates' pen has picked up where it left off last season.  They have a very good group in their top four relievers--at least by projections.  Jason Grilli's peripherals thus far have been awful (5 k/9, 7 bb/9).  His velocity is still there, so I'm not sure that the 37-year old (born just weeks after the Big Red Machine won the 1976 World Series) is breaking down just yet.  But hopefully he'll maintain his struggles until after they leave town.

The Pirates are giving a lot of high leverage innings to Stolmy Pimentel thus far.  The 24-year old moved into the Pirates' bullpen last year after spending his entire minor league career as a starter.  He seems to be relying a lot on his breaking ball, which (interestingly enough) was evaluated just last year to be well behind his change-up by Marc Hulet.  He's one I don't know very well, but was one of the products of the Joel Hanrahan trade.

Winning this series against a top division rival would do a world of good for the Reds.  Let's hope that this is the series where they can start to turn it around!