Coming off of an impressive win against the Cardinals, the Reds return home to face off with yet another outstanding team: the Tampa Bay Rays.

Share All sharing options for: Series Preview: Rays vs. Reds 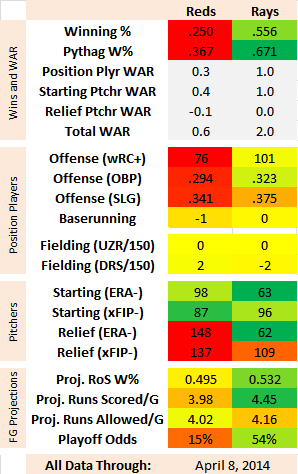 Coming off an impressive win against the Cardinals, the Reds return to home to face off with yet another outstanding ballclub in the Tampa Bay Rays on Friday. The Rays are off to a good start this season, despite falling to the Royals yesterday (data to right are through Tuesday's game). They're a well-rounded team, with a deep roster of versatile position players, most of whom can both hit and field, as well as an excellent pitching staff. Despite playing in the AL East, they are forecasted to be among the better teams in baseball this year by most systems. FanGraphs has them as the 6th-best team (by projected rest of season W%) in baseball, while the Baseball Prospectus ranks them 3rd-best in baseball. They are a very well-run organization, and the Reds will have their work cut out for them.

As for the Reds, while their numbers will look better than the table shows after the data from their Wednesday victory are added, they have unquestionably gotten off to a rough start. They're not getting crushed in any of these games thus far, at least not in terms of run differential. But it's been difficult to get anything going. The offense has, as a whole, really struggled thus far, and the bullpen has already experienced a number of painful blow-ups (tied for 4th in baseball with 6 meltdowns). The one positive, thus far, has been the starting rotation, which has, on the whole, performed very well. The rotation is the strength of this Reds team, but they will need all of their parts working together to make the playoffs this season. 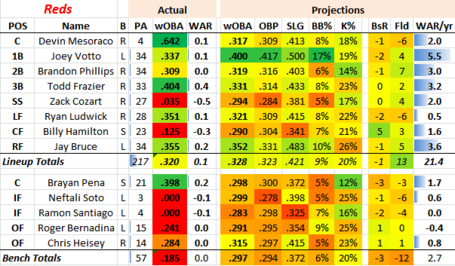 The Reds' biggest struggles thus far have been exactly where one would expect them based on projections: Zack Cozart at shortstop and Billy Hamilton in Center Field. Fortunately, with Billy being awesome yesterday, we are hopefully seeing him getting onto the right track. The projections are very split on him (here I'm using a combination of updated ZIPS and Steamer projections), but my personal hope is that we get replacement-level hitting, +10 runs of baserunning value, and +15 runs of fielding value from him this season. That would make for a MLB average player, which would be a success.

It's been great to see Devin Mesoraco get off to a great first couple of games at the plate. I don't know if he'll ever become the offensive juggernaut that we all hoped he might become, but the projections have him as a league-average hitter. I'll take that, though I'm secretly hoping for more. 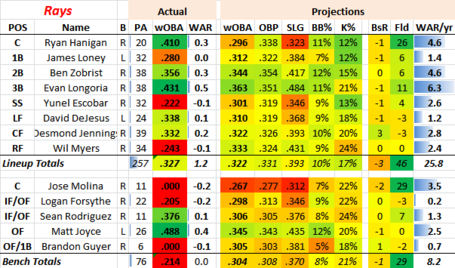 Ok, a word WAR/yr numbers above. All of the WAR estimates are full-season estimates for players, so the position players are projected for 650 PA's. The catchers are only projected to 550 PA's, but niether Hanigan or Molina are likely to get to those totals. In fact, it'd be surprising if either of them did. My goal here is to provide an overall sense of a player's talent, including offense, defense, and baserunning, and not worry about playing time estimates. Now, in addition to the basic fielding stats that ZIPS and Steamer provide for catchers, I'm also including catcher framing projections. The Rays have two of the best in baseball by those metrics in Ryan Hanigan (+19 runs) and Jose Molina (+22 runs), and those numbers result in enormous WAR projections for both of them. ....I have a hard time stomaching the magnitude of the framing numbers, but I think we're at the point in the analysis that we have to start accepting that they're real.

If the numbers are correct, it means that the Reds traded away +4.6 WAR/yr (or ~2-3 WAR in part-time play) player in Ryan Hanigan for a modest-prospect pitcher in David Holmberg. Hanigan's off to a terrific start, and I think we all know how good he can be. To be clear, I'm not sure that Holmberg isn't good market value for Hanigan. But I also don't think the market has really caught up with catcher values... Devin Mesoraco is a favorite of mine, and he's still young, but it's hard to say that the Reds should have kept Hanigan. But it's hard to see Hanigan in another uniform, knowing what he brings to the table when healthy.

In any case, the Rays have an interesting set of position players. Like the Oakland A's, they are versatile and deep. Against lefty starters, Logan Forsythe and Sean Rodriguez can be slotted for players like David DeJesus or Matt Joyce (Joyce is their main DH). This kind of depth helps them to maximize platoon matchups, while simultaneously giving them a talented bench in any given game. They also have a tandem of simply amazing players in Ben Zobrist and Evan Longoria, along with Young Guy Wil Myers, who can anchor their offense against any handed-pitching.

The one real hole is James Loney, a glove-oriented first-baseman who never has really manifested his potential on offense. Interestingly, they extended him--cheaply--through the 2016 season, so it appears that they're happy with his production. I found this pretty surprising, but the Rays are a smart team, so perhaps they're noticing something he does that we're not including in our estimates of Loney (maybe digging out throws? Or something?). Or, they're just willing to punt on 1B given his relatively low cost and the absence of big free agent 1B names.

The showcase match-up this series will be Friday night, Johnny Cueto vs. David Price. Both have reputations as top-tier starting pitchers. And while Price might have a bit more "cred" than Cueto (and a slightly lower projection), Johnny Cueto has been nothing short of brilliant thus far. I'm hoping for a great pitching match-up. Even though he should still be under team control next year, the sentiment I hear is that Price is likely to be traded next offseason if the Rays can get good value in return. They said the same thing last offseason, of course.

The last game should have been Matt Moore's turn in the rotation. Unfortunately for the Rays, he is currently on the DL with elbow inflammation. I haven't spotted word of who will replace him, and for the time being the Rays are playing with 8 arms in the bullpen.

With Trevor Bell on the disabled list for suckitude, the only Reds relievers currently on the staff to have given up runs this year have been J.J. Hoover and Logan Ondrusek. Manny Parra has been extremely impressive in what has been an expanded role for him. I don't really understand why Sam LeCure hasn't gotten more work so far. His velocity was at the low-end of his career typical in his one inning of work, but he was darn impressive that inning, and relied on lots of breaking balls and off-speed pitches (as usual). And no matter how fast velocity stabilizes, I'm not going to fret about anything coming from a single day.

The Rays bullpen has gotten quite good results thus far, despite lackluster peripherals. Nevertheless, their projections indicate that this is a deep group of pitchers. The interesting thing to me is that, short of Jake McGee, they look like a bunch of soft-tossers. Balfour has a reputation as a hard thrower, but he's sitting 92 thus far, and thowing as many breaking pitches as fastballs. Guys like Joel Peralta, the remains of Heath Bell, and Brandon Gomes likewise use a lot of breaking and offspeed stuff to get guys out. But there's nothing here to suggest that that strategy won't work just fine for them. McGee, however, throws very hard, and should be their primary weapon against Bruce and Votto in late innings.

So, the Reds are in for a challenge with this Rays team. But no team is invincible, and any team can win on any given night. That's why we play the games, right?

Also, as a side note, I'm very happy to be back writing series reviews again for Red Reporter!

JinAZ no longer lives in AZ, but he is back to baseball blogging. In addition to doing series previews at Red Reporter, he also writes at his personal blog, On Baseball & The Reds, which has been in operation since 2006.