To alcohol! The cause of - and solution to - all of life's problems.

Share All sharing options for: 2014 Guide to Craft Beer at Great American Ballpark

As opposed to the actual baseballing team that takes the field at Great American, there were a lot of exciting changes this offseason with the beer at GABP. First, and most notably, is the Brewery District Bar. This 85 foot beauty runs between sections 117 and 118, down the 3rd base line, and highlights local brewing in Cincinnati. It's pretty amazing how quickly Cincinnati went from a town with almost no beer scene, to a place with a bunch of great breweries putting out quality product. The locals get their moment in the spotlight at the Brewery District Bar with 8 of the 23 beers coming from Cincinnati breweries.

In my opinion, Blank Slate is one of the most underrated breweries in the city. They are currently pouring The Lesser Path IPA, but I'm hoping that the Out and About Crisp Wheat, which is one of my all time favorite summertime beers, makes an appearance this year.

Fifty West collaborated with the Reds to make a new beer to commemorate their new bar. Clean, crisp and very sessionable.

A flavorful throwback style lager from Listermann - a brewery who has really stepped their game up in the last few years. I enjoy pretty much everything they put out these days, and highly recommend you give them a try if you haven't recently.

A very nice IPA from MadTree, yet another brewery that just does not make a bad beer. Their Sprye Rye Pale Ale is currently my jam.

A malt-forward amber, with just enough hops to balance the beer.

Rhinegeist was named the #7 best new brewery in the world by Rate Beer this winter. Their IPA is a bit more hop forward than the Mad Tree.

A delightfully chuggable IPA with a nice dry finish.

Also available on draft at the Brewery District: 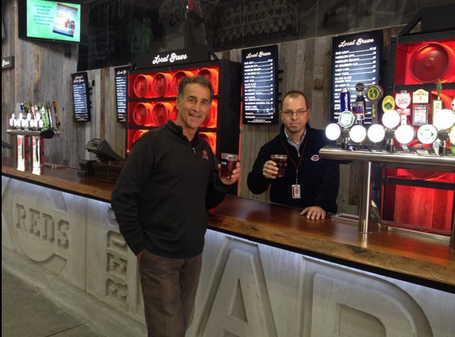 The other big change this season is that the two craft beer stands, The Grand Slam Stand and the stand on the first base line that replaced the Food Network stand, are now being called the Moerlein Lager House Craft Beer Stands. You can find three Moerlein Brews on tap at these stands, as well as Kentucky Bourbon Barrel Ale and Goose Island Summertime. At these stands you will also find the Friday night tappings that we've seen over the last few years. Every Friday night home game, there will be a rare keg (or two) tapped, but once it's gone it's gone, so be sure to get there early. The first one will feature Lagunitas Undercover Shutdown Ale and Upland Vinyl, to give you a point of reference.

The beers listed below, in addition to some less crafty brews, are available in bottles and cans at the two Moerlein stands, with limited availability in Scout's Alley.

Bell's is one of the Midwest's finest breweries, in my opinion. Two Hearted Ale is just a fantastic, and very unique IPA, while Oberon is an excellent representation of the American Wheat style. The Midwestern Pale and Amber Ale are newcomers to GABP this season.

A craft beer for the macro beer drinker. Not too hoppy, not too sweet.

Founders, like Bell's, hails from Michigan and puts out some jam-tastic brews. The All Day IPA lives up to it's name with a slight grapefruit bitterness, but extreme drinkability, while the Centennial is actually used as the benchmark beer for American IPAs in beer judging competitions.

Lagunitas recently became available in southwest Ohio for the first time in nearly a decade, and that is most certainly a good thing. Their IPA is fairly straight forward, with a slightly sweet finish, whereas the Sumpin' Sumpin' (also an IPA) is extremely unique for the style. Extremely pale in color, and very easy drinking for 7.5% ABV. This is also the highest ABV of any regularly available beer not named Kentucky Bourbon Barrel Ale.

Moerlein is now brewing 100% or their beers right here in Cincinnati - OTR to be exact - and the quality has drastically improved. I recommend checking them out again, if you weren't a fan before.

One of the pioneers in the craft beer movement, Sierra Nevada has been making their Pale Ale since 1980. Huge doses of Cascade hops give this beer its signature flavor.

Really awesome little pale ale. Really unique tropical fruit flavors from the hops and very drinkable. Give this one a try if you haven't yet.

A crisp clean Pilsener for you fans of the fizzy yellow beer.

One of the few beers out there that is both organic and Kosher, so it's got that going for it. Which is nice.

Upland is located just west of Cincinnati in Bloomington, Indiana. The Campside is the standout here in my opinion, with a ton of hops dumped in the back end of the beer, giving it a ton of flavor and aroma, without a lot of bitterness.