It's been a hard winter, right

And I've been writing for a blog.

Share All sharing options for: It's been a hard winter, right

If you’ve glanced at a magazine rack or listened to FM radio at all this week, you probably heard that the Beatles arrived in the United States 50 years ago, playing Ed Sullivan’s iconic show on February 9, 1964. It's commonly assumed that the band's lineup remained stable from then on. Not so - one face familiar around here later decided that calling a ball game wasn't such a hard day's night. 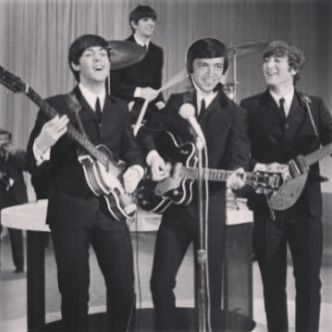 You're probably dying to know wonder whether the Beatles followed the Reds. Sort of, but more specifically ... did the Beatles follow the Cincinnati Reds? No. As for their football interests, manager Brian Epstein forbade them from publicly supporting a team, including their hometown Liverpool F.C. Reds.* Paul historically followed Liverpool’s other team, Everton, but may have later hopped on the Liverpool bandwagon. John likely rooted for the Reds - the one footballer on the cover of Sgt. Pepper’s was a Red and placed at John’s request. Ringo rooted for his stepdad’s team, Arsenal, though his sons were keen Liverpool fans. George did not bother with such boyhood pursuits.

* Incidentally, 1964 was also a big year for those Liverpool Reds. They won their first league title in 17 years, kicking off their own Big Red Machine under legendary manager Bill Shankly. They also switched that year to their all-red uniforms.

The Beatles played at the Cincinnati Gardens later in 1964, and two years later they performed at Crosley Field. The concert was originally scheduled for August 20. Torrential rains forced a postponement to noon the next day - the Beatles' one and only rain check in their history. They then immediately flew to St. Louis to play that night.

Meanwhile, the Reds trudged a long and winding road that summer, a 76-win season sandwiched between much better years. Rookie manager Don Heffner was shown the door in July after the post-Robinson Reds sunk well below .500 on his watch. On the day of the Beatles show, the lowly Astros finished off a four-game sweep of the Reds at the Astrodome.

We know quite a bit about current players' musical tastes, between walk-up music and social media, but this is obviously a recent development. I have no idea if any of the Reds followed the Beatles in the early years. I doubt it - maybe things started changing after Rubber Soul or Revolver - but from what I understand this wasn't yet the music for young men. And since I'm running out of ways to connect the Reds and the Fab Four, here is the Beatles' setlist from the 1966 Crosley Field show - assigned to different players from that team:

The Beatles broke up in 1970 - also the final year the Reds used Crosley Field. Both endings involved bitterness, legal wrangling, and Pete Rose. Rose served as an expert witness in litigation between the Reds and the city over the sale of Crosley Field (and Pete Jr. would pull the lever which initiated the demolition). That I can understand, but I'm not sure I can ever forgive him for breaking up the Beatles.