Get your complaining pants on, everyone. It's time for fantasy baseball.

It's time once again for Red Reporter Fantasy Baseball!  Last year we had four tiers that were set by total comments made on RR.  This season, we will use the standings from those four tiers to make up this season's leagues.  The top three from each tier will form the Votto League, spots 4-6 will make up the Bruce League, spots 7-9 will be in the Frazier League, and the bottom three in each league will form the Schumaker League.  Here are the final standings from 2013: 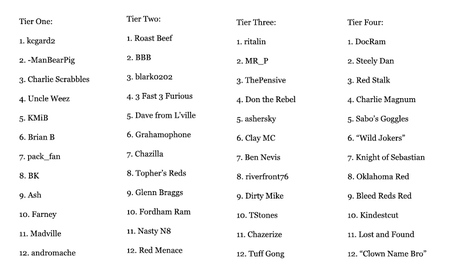 Congrats to kcgard2, Roast Beef, ritalin, and DocRam on their championship seasons.

The scoring categories will be a little different this year.  It's still 6x6 roto, but a few of the categories are different so that stats aren't double counted as much.

Transactions will be capped at 100 just like last season, and we are getting rid of the 162 games limit.  These are the rules for all four leagues, and the rules are final.  If you have a problem with the rules, you are free to forfeit your spot.  This is supposed to be fun, not an outlet for everyone to piss and moan about fantasy baseball minutiae.  I know that some of the leagues had mid-season rule changes last year, and for that I apologize.  That was not intended to happen, and will not happen this year.  If you notice that your league's rules are different than what is listed above, please let me or your commissioner know.

Without further ado, here are your preliminary league assignments for this year: 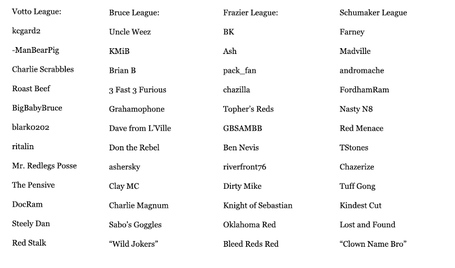 Please drop a comment in this thread within a week to confirm you are playing again this year.  Hopefully everyone shows up again this season, but I suspect this will probably not happen.  So if anyone wants to join the waiting list, say so in the comments.  These assignments are tentative at the moment, and won't be finalized until everyone is accounted for, or the spots have all been filled.  Newcomers will be put in the fourth tier, and players will be moved up if necessary.

Also, I have no idea who the teams named "Wild Jokers" and "Clown Name Bro" belong to, so let me know if that was your team.

I'm thinking that Sunday, March 23 will be draft day, so tentatively save the date for that evening.