Whole lot of prospect talk and not a little coaching talk. Also, Scott Rolen's Reds may return to their rightful owner.

Share All sharing options for: Red Reposter: RR gets "Edgier"

Ramsey's got a video clip of Price talking, which is pretty much basic manager-speak for the most part. Until the end, when he lets drop a "We need to get edgier." Not sure if being Edgy works well over a 162-game season, but I do like the subtly invocation of "First to Third, that's how we do it in Cincinnati!" implied here.

And while invoking the ghosts of 2010, there's one particular ghost who might be coming back soon. Scott Rolen and the Reds are in mutual talks to bring him back in some particular capacity. The Enquirer says that Rolen's mostly interested in being a dad for the time being, but I'm weirdly excited for the day when he becomes third base coach. Especially if Adam Dunn is the first base coach, and what do you mean I can't keep a keg in the coach's box?

Devin Mesoraco is your full-time catcher, sayeth the Enq. Which, duh, but nice to know that Brayan is basically the tough righty/breather guy. Let's see whatcha got, Golem.

Lutz is hoping to make up for lost time, and did well in the Mexican league. Good for him, I hope he's a AAA monster this year. Jason Bourgeois apparently kills it to the tune of .300/.360/.400 in GABP and that's why he's in town. Speaking of monsters and Bourgeois, here's High-Life Jason next to Yorman and Duran: 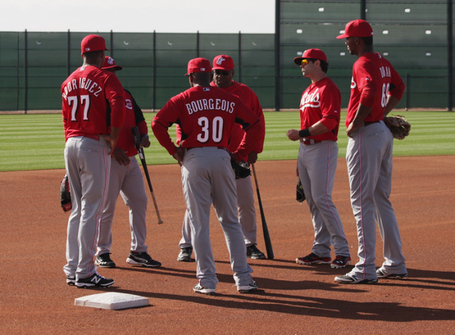 Lutz and the baseball card. Mister-Baseball has a funny story about how Lutz' friends and family have been begging him for a card (apparently his Mother's Day home run was on national news) and now he has one. Cool!

Douglas D. Dirt looks at Michael Lorenzen. He thinks that the 2013 draft pick will be only good for 3-4 innings a start this year, much like Amir Garrett or Tony Cingrani. But he's optimistic (then again, he usually is), so I am as well.

Also, Rotographs discussed the Reds on their Podcast, if that's your sort of thing.

Did y'all just not tell me about the giant clown singing Royals?