Share All sharing options for: Red Reposter: Again, with optimism

They mention that he's new to CF and new to LH, but he's not a prospect anymore and rather a grown-ass man. He's been working hard, I'm sure, but it'll be interesting to see what happens with him.

Billy's a hard man to pin down. He had a ~8.5% BB rate in his earlier years, and then went for a cracking ~15% in his breakout 2012. He went for 6.9% in AAA and then 9.1% (SSS!) in his few MLB PAs. So he's kind of all over the place. 15% is Choo territory and even 12% is Hanigan's career average, and I think I speak for everyone when I say that I will be pleased as peanut butter and fluff if Hamilton can put up 2010-2012 Hanigan's slash line. That said, even ~8-10% puts him in the Frazier/Bruce zone, where he'll have to really put the bat on the ball in order to stay effective. I just learned how to make a poll, so tell me where you think he'll end up in the poll.

Jay Bruce is beautiful just the way he is. Less focused on how much he weighs, he's more interested in just "feeling good." Great, Jay, great for you. I just had a half a brick of helva and I feel good, but I don't know if I can run down a double in the gap.

I'm not really in a place to be concerned over where Jay ends up because I have a lot of other things I'm worried about on this team. But please, Jay. Be great.

Jose Diaz was...not beautiful just the way he was. CTR has the ultimate "best shape of his life" story as Jose Diaz lost 70 pounds over the offseason. He has some pretty great AAA numbers (9.9 K/9 and 1.03 WHIP last season), but this is the wrong bullpen to try and find innings for a 30-year-old in. Still, all the best, Lil' Jumbo.

Tim Byrdak is looking for a job and/or attention. He Tweeted this, amusingly: 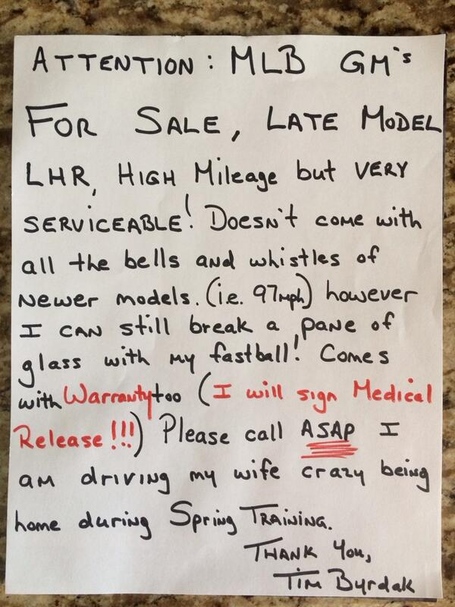 In things that only interest me news, an American-born dude named Vic Wild, who is named Vic Wild, won a gold medal for Russia today. He quit snowboarding because the American team is sponsor-funded, and there are no sponsors for snowboard racing, apparently (the article notes that the American competitor in the race is semi-homeless). But he married his Russian girlfriend (who got bronze, btw) and got funding by the state-funded Russian Snowboard Federation and bam! gold medal!

In things that only give me conniption fits, Spencer Hall's otherwise-amusing article on cross-country skiing had this weird aside:

Everyone does when considering the second country they're going to be from, the place where they really belong, the place where, after 12 very scientific questions are answered, an internet quiz tells you to call your spiritual home. This place usually accentuates or flatters your favorite things you'd like to be, and rarely highlights the bad, the irregular, or the disastrous. This place is usually in Europe and it is never somewhere like Congo (Brazzaville), because your secret homeland is never, ever a place that is actually hard to live in.

It might just be me, but it takes a particular type of American to say that:

Because honestly, a huge chunk of the enslaved-to-America population came from what is now Congo (Brazzaville), and there are tons of people -- even people who read English! -- who do not have origins/dreams of living in Europe. And since Mr. Hall worked in refugee services before SBN, it's not like he doesn't know that such people exist. But I guess that they aren't SBN's target audience. They're not part of "SB Nation's young male audience consistently ranks as the most affluent and influential in the sports category." But it might just be me.