This is the thread to talk about Homer Bailey.

Share All sharing options for: The Homer Bailey Thread: ~6 years/$100M

Paul Hoynes of the Cleveland Plain Dealer was the first on the ball with regards to a Bailey extension, and he has been corroborated by both Fay and CTR, and the last word has Bailey saying "We're moving in the right direction" and "Just hammering out some details."

The deal will probably be ~$10M this year, his final year of control, and then five years with ~$90 million spread out among them.

Johnny Cueto has a team option for 2015, which is also Mat Latos' last year of control. So there's some serious Starting Pitcher Scratch available that ought to go to at least one of these three. Homer's had the least success of them so far, but one could use his peripheral stats to say that he's the best bet moving forward. Cueto is short (if that matters) and has only had one of his past three years healthy, and Latos had two surgeries this offseason (albeit both minor).

The money, to me at least, is basically what it costs for a veteran pitcher, and either Latos or Cueto will arguably be more expensive. Homer has the best WAR/$ potential of the three, which is not for nothing for a cash-strapped organization.

And then you realize that the org is cash-strapped because of contracts to Jack Hannahan, Skip Schumaker, Manny Parra, and Jonathan Broxton. On the good side, Broxton has a new delivery he's been trying out this season: 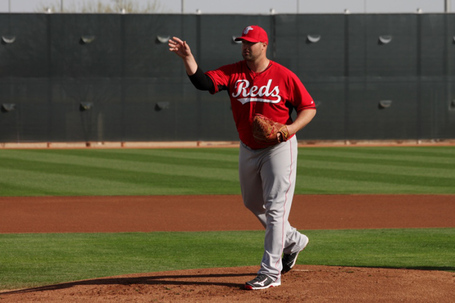 I'm pro-this-signing. I wanted one of Cueto/Latos/Bailey signed to be the ace until Cingrani/Stephenson/all-else come through, and Bailey could be the biggest bang for the buck. Cueto's my fave and Latos is a horse, but all of them have their ups or downs associated with their names.

Just glad the Ol' Hoss is getting his apples from the fruit man, is all.