Setting Sail on the Wishbone Sea, a Red Reposter

Pitchers and Catchers report to Goodyear. I report to BK with a bunch of links.

Share All sharing options for: Setting Sail on the Wishbone Sea, a Red Reposter

Pitchers & Catchers Report isn't our most exciting holiday. Opening Day has a parade and actual, counting, baseball. All-Star Week is fun if that's your sort of thing, and we've gotten pretty used to Clinchmas. But still, P&C is on the calendar and the pictures are nice to look at. Let's use this thread to put in all the fun pictures of Reds playing toss and getting weighed.

Until then, the links.

Kurt Mensching over at BYB has a nice little P&C post. He's got paid by SBN to go down to Detroit's spring training and talk to Brad Ausmus, so good for him.

According to Grant Brisbee, the Reds have the best Jeter Goodbye Gift of them all.

Also from the Briz, his "why I am writing" post is kind of nice. How do you become a writer? I dunno. Go ask him.

For those following the Art of Fielding Book Club, it turns out SBN interviewed Chad Harbach way back in the day. They didn't ask my very important "Phumber Hall" question, but if you've finished the book by now (last entry is on Monday!) than you'll like this interview.

MLB.com caught up with Dusty Baker to see what he's up to this winter and spring. It's a tough read at times -- Dusty remains the coolest dude if not the best manager -- but I'm glad to hear that he's getting some family time in.

CTR has a listicle of "five new faces" which is wayyy more depressing than that Dusty Baker piece.

On the other hand, PITCHING PROSPECTS! 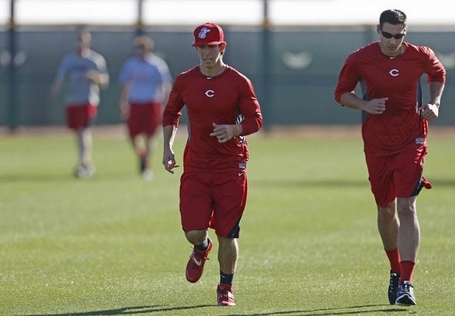 Bryan Price wants his players to talk about baseball during camp:

But I think when you talk about baseball – situational base-running, situational defense, situational pitching – a lot of that, a lot of what you learn you learn through conversation and discussion, creating talking points among players so they can express their feelings.

So if you see a bunch of new faces in the comment sections here, say hello to your 2014 Cincinnati Reds!

Price also sat down to talk to CTR in a light interview. He does let on that Broxton isn't healthy yet, which, super.

Retro dot Cincinnati dot com looks like it could be a really cool resource moving forward for all y'all.

Phoneblocks "Lego" phone is really cool. The concept is that when your phone breaks, you can replace the broken component rather than the whole phone. Looks cool, too.

I'll probably be the first person on SBN to link to The Baffler, but maybe it's just pet ownership, but I've been thinking a lot about play, relaxing, and generally also getting myself to tone the hell down. The next eight or nine months or so are going to be really weird, frustrating, anger-inducing, but mostly fun. It's tough to play the whole "oh, this is just fun" game when MLB is getting rid of pensions for its non-players in a move that experts are calling "total bullshit," but it's the world we have. There are parts of it that I really want to dedicate my life to changing but...baseball's not one of them.

Baseball is fun. At least hopefully it will be this year. I hope you hope it will be, too.