Here's to hoping we see less dudes in red polo shirts jogging to the mound this season.

BtBS: Why are Innings Limits Still a Thing?

This article is a few weeks old, and it's really only here as a loose tie in to something I wanted to talk about.  That is, Tony Cingrani and inning limits.  This BtBS post postulates that it is not the amount of innings pitched that is important, as much as the number of pitches thrown.  Which, you know, makes a lot of sense.

Cingrani, being a high strikeout pitcher, tends to rack up a lot of high pitch counts, thus shortening his outings.  He made it through 7 innings pitched only 4 times in 18 starts in 2013.  He is entering the 2014 season as the de facto number 5 starter, which would put him in line for around 25-30 starts, greatly increasing his innings count and also the number of pitches thrown throughout the course of the season.  Cingrani threw ~150 innings in 2012 and ~135 innings in 2013.

If the Reds are in contention in September, you'd like to see the Cinnerman healthy and on the mound during the stretch run, and Votto willing, in the playoffs.  My question is, do you think that Price and the Reds should limit Cingrani's outings this season, and if so, how?

In contrast to the recent #SLEEPGATE with Aroldis Chapman, we have a story about Uncle Jesse's offseason routine.  Apparently Winker's folks own a hitting clinic outside of Orlando that was founded by Dante Bichette.  This is kind of a standard offseason puff piece about a prospect working real hard to make it, but there are some nice quotes from the Reds player development director in there.  Also this, from Winker:

"There a couple of things I want to work on with my load, but besides that, it's really about keeping everything simple and having fun." [ed. note: lulz]

PECOTA projections were released last week, and Billy Hamilton's Base Running Runs (BRR) projection caught the eye of the folks at Beyond the Box Score.  Despite projecting a rather pedestrian slash line of .245/.301/.341 in 487 PA, PECOTA has the Cool Papa swiping 74 bags and providing 10.8 BRR.  Or to put it another way, adding a little more than one win on the basepaths alone.

Sheldon: Jocketty Chimes in on the Marshall Acquisition

Contrary to the rumors, Uncle Walt is in fact still alive.  When asked about the Marshall signing, Walt had this to say:

“I talked to him and he sounded like a good kid,” Jocketty said. “We had good reports on him. He had one of the best changeups in the Yankees organization. He’s a sinkerballer with a good slider. He’s got a couple of [Minor League] options left."

No mention on why he DFA'd one of the only MI prospects in the organization as opposed to, I don't know, Nick Christiani or something.

I've linked to Craig a number of times before.  I'm a big fan of his, and I'm glad he's part of the 'Graphs family now. 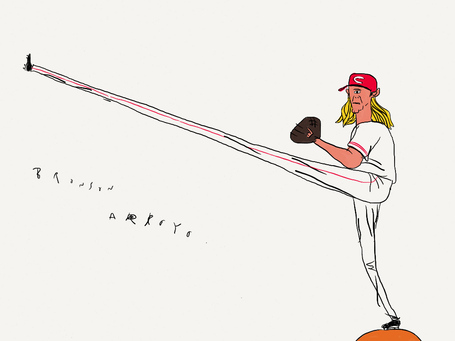 Daggering is crazy, crazy shit.  Has anyone heard of this before?