Prospect lists are like assholes, everyone has one.  But it's much more fun, and socially acceptable, to show off your prospect list.  So now that we are finished with the Community Prospect Rankings, I thought it would be nice to have all the Top 10 lists in one place and see what the consensus Top 10 was from all the experts, as well as the personal Top 10's from the Farmer's Only staff.  It's not like we have much else to talk about right now anyway.  Without further ado, here is your consensus Top 10 list:

A few notes... The top three on every list was the exact same guys, in the same order.  David Holmberg didn't end up property of the Reds until after Baseball America and Doug Gray's lists came out, so there is a chance that he would have ended up higher on this list had they waited until after the December 3rd trade.  The FO staff seems to think more highly of Ben Lively than the experts, and the experts like Moscot more than the FO staff does.  Oh, and Keith Law is kind of crazy.  Check out all the lists below: 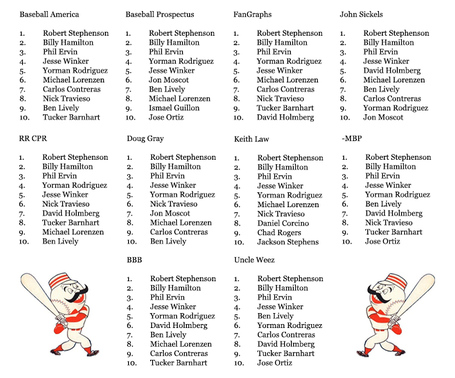