Red Reposter: Do You Know Where Your Pitchers & Catchers Are?

The first photos of the Spring come in. ESPN publishes a story about Chapman. The Marlins' GM missed the trading deadline to compete on Survivor?

Share All sharing options for: Red Reposter: Do You Know Where Your Pitchers & Catchers Are?

Jamie Ramsey has the first images of Spring so far. Ondrusek has hair that'd be down to the ass of anyone else, JJ Hoover's beard is "in spring training shape" in the words of -MBP. I have no idea who Lee Hyde is. 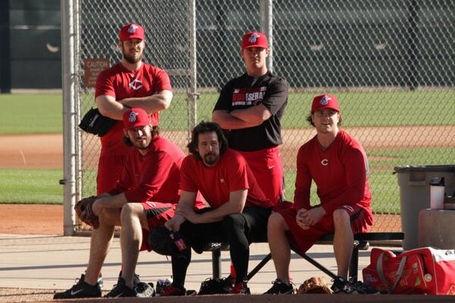 Aroldis Chapman's family came from Cuba to join him, in this actually-good-reason-to-read-ESPN. There's been a couple false-started conversations so far, but I'm sure y'all have opinions on this very interesting article that basically describes Chapman being bored, lonely, and probably oughta be traded (even though I like him an awful lot). Guh. I dunno. Thoughts?

Jesse Winker is excited to start a new year blah blah blah pablum. But nice to read about this guy and hope to read more about him going forward.

Out of ideas of stuff to write about this winter? Brisbee too! He says something about a window, relevant because the Reds' window is closing (?).

There's a freestyle skier in the Olympics named Filip Flisar. Which is awesome because his name is a rough explanation of his sport. Also, he looks like this.

Interesting little story on NPR to wrap up today's reposter about internet in the US. It's like, wayyyyy worse than internet anywhere else. Which is true, actually. Anyways, interesting stuff.