Just hours after his Oakland Athletics saw their season end at the hands of the Kansas City Royals in the AL Wild Card game, Adam Dunn called it a career.

Well boys and girls it was a hellava time! I truly thank all you fans! Y'all made it worth playing. Thank You!!#phase2begins

The 4 year, $56 million contract Dunn signed with the Chicago White Sox in December of 2010 was up at the end of the 2014 season, and the Big Donkey had hinted on several occasions that he'd likely hang up his cleats instead of seeking another contract.  In making it official, the current baseball community gets to high-five and give one last smack on the butt to one of the truly unique and polarizing players in recent memory, who also happened to be one of the most productive Cincinnati Reds of this generation.

Dunn's career basically forced me into learning about advanced metrics and more relative ways of looking at the game of baseball.  A sabermetric Frankenstein, Donkey's talents were mighty in some regards and woefully inept at others, and attempting to place value on the sum of his parts requires one of the more extensive formulas known to baseball-kind.  His penchant for being simultaneously god-like and oaf-like meant that explaining him was exhaustive, as it was hard for many to watch a player 162 times a season and wonder how he could be such a glorious mix of so, so good and so, so bad.

His power was prodigious, as his 6'6" frame and ten mile bat was capable of launching dingers deeper into space than anyone I've ever watched, with this example still the longest hit baseball I've witnessed in my existence. His eye at the plate was elite, too, as the man walked over 100 times in a season on 8 separate occasions, putting a strain on the dirt between home an first with each step of his 280 lb frame.  In all, he whacked 462 homers and amassed 1317 walks, both of which crack the Top 40 of all time and pretty accurately portray the top-end talents he displayed during his 14 year career.

With the good came the cringeworthy with Dunn, however, and for as much as his pop and patience lent credence to his supporters, his sometime comical defense and colossal strikeout totals have earned legendary status with his critics.  You'd think a man of his stature would have no business being tasked with covering ground in lots of open space full time, yet he spent the bulk of his career as an outfielder, clocking in with over 1100 games played in either LF or RF.  The -29.5 dWAR accrued in the 2001 games played as an OF, 1B, or DH means he was roughly the inverse of defensive legends Ivan Rodriguez (28.7) or Omar Vizquel (28.4), both of whom rank among the 10 most valuable defenders in history according to Baseball Reference.  Heck, one specific measure had him tabbed as the 5th worst fielder ever (and that was a cumulative FanGraphs-based table done prior to 131 games he played in this season).  And if you don't trust WAR, you probably trust errors committed, and Dunn chipped in historically well in that regard, too, four times leading the NL in errors as a LF and ranking among the Top 4 in that category every season from 2002-2008.

There were also the strikeouts en masse, which piled up in record amounts year after year.  Donkey led all players in Major League Baseball in single-season K's 4 times, fanned over 160 times in 11 seasons, and the 2,379 career K's he accumulated rank as the 3rd most by any player in the history of the game.

He was a disappointment if you got lost in focusing on how gargantuan his certain talents were, a success if you took him for just what he was.  He hit 38 or more dingers in 8 different seasons, the same number as reigning dinger king Barry Bonds, yet his 16.7 career bWAR just moderately clears the 11.9 bWAR Bonds put up in 2001 alone.

Between being the Reds' 2nd round draft pick out of high school in Texas in 1998 and the August 2008 trade that sent him to the Arizona Diamondbacks for Micah Owings and spare parts, he etched his name in Cincinnati history in his own very unique way.  His .380 OBP with the Reds ranks as the 7th best career mark in team history, and his .520 SLG and overall .900 OPS both rank 3rd.  His 270 homers in a Cincinnati uniform are the 4th most ever hit by a Red, sitting just behind a trio of Hall of Famers in Johnny Bench, Frank Robinson, and Tony Perez.  Four of his individual 40+ dinger seasons rank among the Top 7 single season marks (with ties), too.  He ranks 6th in walks, 3rd in strikeouts, and tied for first in leather lounge chairs kept in the clubhouse. 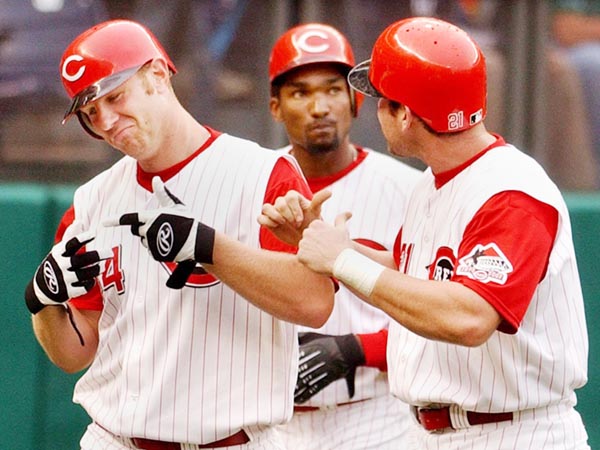 And that was Dunn.  He didn't swing terribly often, but when he decided to, he missed a hell of a lot.  But when he didn't miss, he hit the everliving snot out of the ball, as evidenced by him having the 5th lowest AB per HR rate in history (behind only Mark McGwire, Babe Ruth, Barry Bonds, and Jim Thome).  He played terrible defense, but that's probably as much on him as it is on the people who looked at him, looked at his stats, and decided he should be tasked with playing a lot of defense.

Most importantly, though, he had a heck of a time playing baseball for money until he didn't, and when he realized he didn't, he called it a day.  Even Marty would give him credit for the latter.  With the A's bowing out of the playoffs last night having opted not to deploy Dunn at all, he finishes his career having never played in a single playoff game, which is surely a disappointment.  He was the poster boy for an era of really, really bads Reds teams during the prime of his career, and while he was by no means the biggest problem for that series of squads, those lost years cost him his best chances at making a mark in October.

Personally, I'm disappointed that he won't be around for the 2015 Home Run Derby at GABP, since the fishing poles on the Kentucky side of the river would've needed hard hats on that July Monday night.  He'd have hit a handful 500 feet, missed one or two entirely, and maybe even fouled a hard one off the facade of the radio booth just for good measure.

Have a ball, Dunner.  Go catch a ton of fish.