Tony Cingrani has had two stints starting. In one he was homer-prone, and now he's walk-prone. Is there a "better" version of Cinnerman? What is expecting too much out of a rookie pitcher?

Share All sharing options for: Trading Homers for Walks with Tony Cingrani

Tony Cingrani is having a heck of a season, and it's not just me saying it. He's the 8th-ranked rookie in fWAR, and is fifth among rookie pitchers in bWAR to Fernandez/Ryu/Miller/Teheran. All of which have thrown ~50 more innings than him, but I've digressed already and it's the third sentence. Point is, he's doing pretty good.

I've been frustrated by the more walk-friendly Cingrani. It just seems like a more wasteful way of pitching, walking every few batters. And the homers were at least challenging in a hypermasculine, mano-a-mano, sort of way. But despite my frustrations, it appears that Cingrani is pitching even better since getting sent to the bullpen, if those wOBAs are anything to be taken. The OBP is up to a not-insane number, but that .436 SLG in his first 40 IP was downright mediocre. Now nothing about him is.

My first question was whether this was on purpose or not. Cingrani's not throwing an appreciably greater number of offspeed pitches, so maybe there's something to his approach. I'm a bad statistician, so the best solution I could come up with is comparing two of his highest-pitchcount starts before and after the selective midpoint. This was his April 26 6IP, 2H, 0 ER, 1BB, 11K start against WAS (NP: 110) and his July 23 6.2 IP 5H 2ER 3BB 2K start against San Francisco (NP: 118). Here's what we got: 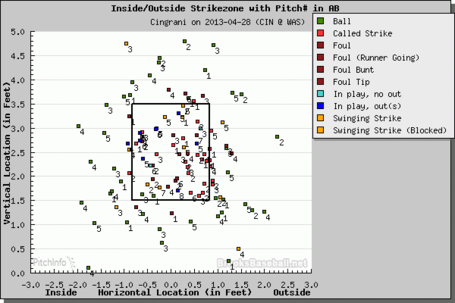 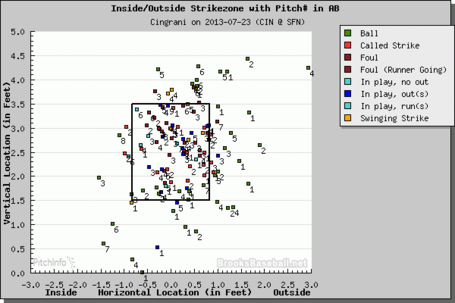 Against Washington, he threw 17 pitches above the strike zone, all fastballs. That "3" right at 4'8" was against Bryce Harper, and was awesome. Against SF, though, he threw 16 pitches above the strike zone. So no big difference there. But there is a difference in sequencing: 12 of those high pitches were within the first three pitches of the count in the earlier game, compared to only 3 in the second game. So basically, Cingrani was challenging folks early on with a high fastball, but now he's trying to get those folks to chase. Trying to get chasing is a good way to get more balls and longer counts and more walks. So maybe there's something there.

I asked Slyde to plug these numbers into his utility belt. Here was his answer:

Historically, HR are worth about 1.4 runs each and walks are worth about 0.33 runs each. So, you can give up 4 walks to each HR and still rate slightly better when it comes to wOBA & linear weights.

Whether or not there's anything to be said for exchanging HR for walks, I don't know. Probably just a small sample thing, but I'm not sure how you'd analyze that.

Please ignore the second half of that answer, which may point at the futility of this exercise. Let's rather focus on that top half. Even if it impinges a bit on his innings/game at this point, the Reds have a strong enough bullpen to more than make up for it. The 14 more walks Cingrani's given up are more than outweighed by his relative stinginess (six less homers). Kindly don't mention that this includes two games at Wrigley and one at Philly in the first half, and one at Chavez Ravine and one in San Fran in the second half. Let's focus on the positives. Learning when (and who) to challenge is part of a young pitcher's education, and this was the guy who just last year was saying that his strategy was basically "throw ball hard past people". He's been able to keep his edge while learning who and when to nibble.