Well, that was fun. Between the Giants and the A's, I feel pretty good about the Reds' ability to conquer the Bay Area residents. Now they have a snooze day before going up against their little brothers' little brothers.

Above all else, Corky Miller is a dad. So even though the veteran catcher was struggling to pull on his jeans and limping around with a sore right knee, when son Chance brought him an unopened can of soup, wanting a post-game snack, Miller limped into the players' dining room, leaving behind a pack of cameras and reporters.

"When your kid wants soup, you get him soup," Miller said upon his return.

Corky hit two doubles with two RBI, and left the game after giving Alberto Callaspo a whoopin' at home plate that left 'em both dinged up. Bruce hit a wanger and got his league-leading third outfield assist. Bailey had some trouble that the erstwhile (erstwhile? ERSTWHILE!) Manny Parra bailed him out of, and with an off-day tomorrow, hey. The Reds'll take the 6-5 win and the two-game sweep of the A's. The marquee game of the night is probably the Dodgers visiting St. Louis at 8:15 ET, with Ricky Nolasco taking on Shelby Belle Foote Miller.

From Warnemuende-the-Warnie-dude: Broxton is back (Villareal takes the camino real back to Louisville) but will stick in the middle innings in deference to LeCure and Hoover for the time being. Frazier is moved to the two-spot on nights Paul/Heisey/Ludwick(?) plays, because, to quote Dusty, "It can't hurt him." Mr. Choo has won the Reds' Heart & Hustle Award thanks to his work with his Choo Foundation in Korea. Jay Bruce wuz robbed.

C.Trent talked to some Reds about Biogenesis. My favorite take is still Jose Arangure's "So I guess only Latino players use PEDs." Bailey's "what's with the double-standard?" is a legit gripe as well. And it's worth going down in that article to read some Votto quotes:

"It can be a bit frustrating especially when it’s the people that speak to the Reds fans, my fans, the public in general are criticizing me. But you know what? That’s their job. At the end of the season, in general, I think people will be satisfied with the way I played and if they’re not, maybe they’re putting too much emphasis on one particular part of the game."

"I’ve used criticism i the past to fuel me, I’ve used it to motivate my work, motivate my intensity. Nobody’s immune to it, that’s OK. That’s totally healthy, that’s a totally healthy, human reaction to people criticizing, or people criticizing your best efforts. It’s perfectly fine. We have really good fans in Cincinnati, they’re very supportive, very consistent and I enjoy playing for them."

Also in that article is Dusty buying some random family dinner, some prospect rankings from BA, and other C Trent pickings. He's getting good at that.

And now: some reads to get you through the next 36 baseball-less hours:

Howard Craft wrote this on my birthday, and I am so so sad I only saw it this week:

I’m standing in my grandmother’s backyard, pitching distance from her tool shed. My Houston Astros cap pulled low, head down, holding the ball in my glove, I check my finger placement for my fastball. I am J. R. Richard and I can throw a hundred miles per hour. Really, I am Howard Craft, twelve years old, most often referred to as June Bug by family and friends. My fastball isn’t a hundred miles per hour, but it’s loud enough to make a bang when it slams into the side of the tool shed. After several of these bangs, the back door of the house opens and my father comes out. He crosses the backyard like an angry manager en route to pull a pitcher after he’s given up a home run in the bottom of the ninth.

Neyer wrote my favorite thing about the Biogenesis disaster, besides Andro of course. People are complicated. Embrace that. It's okay. Joe Posnanski also wrote something nice. And Eno Sarris at Fangraphs, erm, graphs really hammered a point home for me and thus for you: 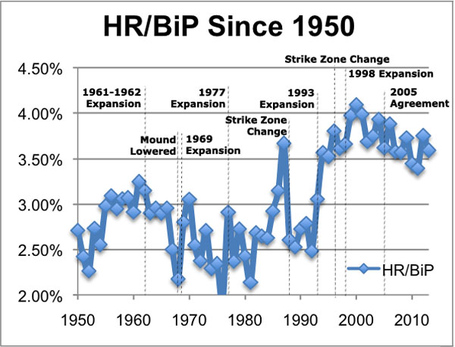 And finally, the single most beautiful piece of writing I've seen this week has come to me from CraigsList Missed Connections. And not in the way you may think.